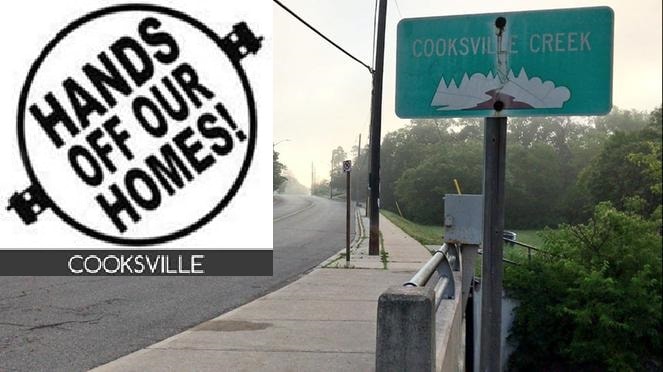 The idea of a Cooksville Creek “central park” was first revealed to insauga by Mississauga Ward 7 Councillor Nando Iannicca some time ago during a meeting. We subsequently followed up with another article as well as one of of our QuickBite News videos on this subject:

Back in June of this year, the City of Mississauga was given the go ahead to commence discussions and move forward on the initiative.

“We’re just at the stage of issuing letters to property owners for them to indicate their interest,” says Laura Piette, Director of Parks and Forestry with the City of Mississauga, who said she could not reveal exactly how many properties the city hopes to purchase because of reasons of confidentiality.

Piette said if property owners are interested in selling their homes and land to the city, Mississauga will have appraisals done on the homes before purchasing the properties at fair market value. She also mentioned the use of the city’s cash in lieu of parkland funds collected from developers to acquire park property. When insauga last spoke with her, Piette said some homeowners had expressed interest in the plan and that all affected homeowners have received letters notifying them of the city’s interest and inviting them to make contact with realty staff. Piette said city staff have received very positive feedback.

But while there may be some people interested because they’re given up with having to deal with constant flooding issues surrounding their homes, there are those that are balking at the idea and are standing up to fight the city, and their own city councillor. An online petition has been launched by a resident called “Save Our Cooksville Creek Homes”. The petition has so far garnered over 130 signatures, with the intended recipients being the City of Mississauga, Mayor Bonnie Crombie and Iannicca. The petition states:

Many of us have lived here a long time and we are a community that does not wish to be forced out of our homes. We love our houses and are very happy here. The City of Mississauga would like to replace fifty homes for a park, yet we are surrounded by parks. Please show them you care by signing this petition so we can fight to keep our homes!Thank you in advance Cooksville Creek residents.

There is also a Facebook page set up called Hands Off Our Homes – Cooksville, which as of this writing has 16 likes (ironically, around the same number of people that Iannicca said whose homes would actually be affected).

Some of these residents attended General Committee this past week and made their views known to Iannicca and the rest of council. The meeting can be seen in its entirety here.

The first resident to speak was a woman named Norma Manson. She said that while she was not one of the identified owners, she and one other person would be the only ones left on her street, and expressed more concern on the effects this proposal would have on the social infrastructure. Manson also said she got a letter from Mayor Crombie about the need to give residents unbridled quality of life, but Manson wondered how do you prioritize one’s quality of life over another persons?

Manson concluded her remarks by mentioning how she went canvassing the neighbourhood from King Street to North Service Road and noticed the vitriolic level of mistrust people have towards Mississauga City Council. She asked one final question to councillors: with the ascent of this proposal, will they dismiss them so callously and will they choose whose quality of life is important, and asked them to re-vote on this initiative?

The next speaker was Michele Alexander, the creator of the online petition who lives on Paisley Boulevard. Alexander said there was an apparent lack of appropriate consultation and contradicted city staff’s statement that a lot of people were open to selling. She said people only received letters stating the city’s intention to purchase their land without much explanation, leaving people wondering for weeks and seeking more information, to which there was no reply.

Alexander said it seemed like the city announced its intentions right before literally everyone who could provide answers left for vacation. She also mentioned how Councillor Iannicca initially said this was to be a 40 acre park, when later it was revealed to be only 25 acres. The councillor also, according to Alexander, told the media that he hoped it didn’t come to expropriation, but added that Mississauga Parks and Forestry Department seemingly contradicts him, as they said that ‘we have no mandate for expropriation…at this time’. Alexander asked what ‘at this time’ actually meant.

The second issue outlined by Alexander regarded the seeming lack of clear information and proper planning that caused confusion amongst residents: some of whom were thinking “the city is going to take my house.” Another point was that similar properties in the proximity of transit, banking and other amenities would be next to impossible to find for these people, especially in this volatile real estate market. Alexander concluded her remarks by asking for council to give a clear plan as to what they intend to do, and a commitment that no homes would get expropriated.

The next speakers were Lioudmila Chubey and her daughter, Olivia. Chubey said that no one she spoke with in her neighbourhood expressed any enthusiasm for selling, wondering why this proposal was only coming forward now and not in 2009 when the Cooksville Creek flooded back then. She said she believed that Iannicca didn’t actually consult the people in the area or acknowledge them in any way.

She also said it was good that the city was implementing all these policies to make sure the middle class could afford to live in Mississauga, but this central park proposal was an attack on the middle class (it sounded as though she was being asked to live in the trees). She concluded that while she supports parks, she was against proposals that try to compensate for poor planning decisions and putting the burden on taxpaying residents.

Her daughter, Olivia Chubey, didn’t believe Iannicca was representing the community, pointing out that he was saying there was positive feedback on the park idea yet when there was all this opposition from the online petition. She surmised that Iannicca seemed to be ‘speaking for us without actually speaking to us’, saying if he was serious about getting feedback he would have gone door to door in the neighbourhood. She cited this previously published insauga article where he was quoted telling residents “if you don’t like this building coming into Cooksville today, please move out now,” as an example of this alleged aloofness.

She concluded with some suggestions on what could be done as an alternative. One idea was to get in writing that those who wished to stay are guaranteed to be allowed to, with the park built around them. Another idea was to slowly purchase the homes only when people wished to sell them, and the third idea was to somehow connect the existing Erindale and Huron Parks resulting in something akin to the ‘Central Park’ the city was looking for.

The final speaker was a gentleman named Greg Carraro. Carraro said he participated in the Vision Cooksville and Dundas Connects and roundtables, as well as meetings with former mayor Hazel McCallion after the flooding in Cooksville in 2009. While he supports the idea for more park land in principle, Carraro said he never once, during all that time, heard of expropriating homes or demolishing a neighbourhood to create a green space as even a credible option. Carraro also doubted that the city would be liable for future flooding, believing the city would be insulated from liability claims.

After all of this, Councillor Iannicca responded and mainly wanted to refute a number of things that were said by the residents. First that this matter has been in the public domain for at least eight years, reported in the media six times in the last 18 months, and was the main subject of the last two annual meetings for the Cooksville-Munden Park homeowners association. The main point was the park idea has been discussed numerous times before.

Iannicca then went on to explain the procedure behind why he did what he did, saying first he knew the some 113 acres of land was deficient, but he didn’t want to announce earlier and attract real estate “flippers” preying on people and pressuring them to sell, or announce too early that the city wanted to buy their homes as the market dipped. He also repeated that he was 100 per cent against any notion of expropriating people’s homes, saying these deals would go through with a willing buyer and willing seller. However, Iannicca said his own position, or anyone else currently on council, cannot bind a future council if future councillors sought expropriation.

“We doing what we need to do now to build a proper city,” said Iannicca. He also took some exception to those who spoke, saying Ms. Alexander had never contacted his office in the 30 years he’s been sitting in it, and Carraro has never contacted him on this issue. He also said through his own discussion with homeowners and ratepayers associations that there was widespread support. The councillor also cited some other news articles of quotes that Carraro seemed more intimately involved on the issue than he previously let on (Carraro had penned an article about the 2009 flooding in the now defunct Mississauga Life magazine).

There was also some clarification over one of the more salient points about this proposal: that the city was going to pay $2 million to people to sell their homes. City manager Janice Baker said the authority was granted to her office over the summer while council was in recess in order to allow the closing of any deals made between homeowners and the city during that time; no closings were made during the summer. Now that council has returned to session, the city manager’s authority regarding the $2 million has been rescinded and put back under city council, so any future closings from this point forward will have to be approved by council through the standard real estate protocols the city has. Baker also confirmed that they will be at fair market value.

Overall, there seems to be a lot of information floating around that has confused residents and the fear of expropriation has really driven the “conversation.” The structure of the council meeting didn’t really allow a more in-depth dialogue; people were placed on the agenda to give deputations then the local councillor gave his response, followed by a period of questions. “You had your chance to speak,” Iannicca retorted when Carraro or the others who spoke attempted to interject.

Insauga reached out to Iannicca’s office asking him or his staff if they were planning to host more intimate public meetings in the future to hash things out and clear up information for residents, but he did not respond as of this writing.

But perhaps that would be a good idea to clear things up for the residents of this part of Mississauga…some of whom are quite hesitant about being replaced by a “Central Park.”