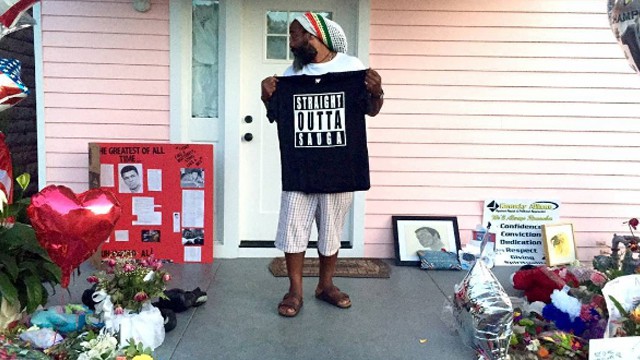 Most people can think of a celebrity they worshipped during their tender years, but few can say that they felt a cosmic, undeniable and somewhat spiritual pull to that person — a pull that compelled them to drop everything and embark on a sudden and unexpected journey to their hero’s final resting place.

For Mississauga resident Gregory Moodie, the pull he felt after hearing of boxing legend Muhammad Ali’s passing prompted him to decide, on a whim, to drive to Louisville, Kentucky to see his hero’s memorial service.

Moodie (also known as Shamus) is the manager of the iconic Failte Irish Pub in City Centre. He’s also a part-time DJ who spins at Port Credit hotspots Spice Lounge and Door FiftyFive.

When he learned of Ali’s passing and the scheduled service, he knew he had to find a way to make some kind of contact with the man who always impressed and inspired him. Despite not having tickets to the service, Moodie and friend Tony Lanzillotta (who goes by Tonylanz), left Mississauga at 3 am Friday morning and drove 10 hours to Kentucky.

“My friends said it was crazy, but admirable,” he says. “I wasn’t excited when I left. I felt numb. I was just being pulled and drawn there. I thought ‘this is what I’m supposed to do. This is where I’m supposed to go.’”

When Moodie and Lanzillotta arrived in Louisville, they came up against a difficult — and seemingly insurmountable — obstacle: no tickets to the event. The service was a somber but star-studded one, with Bill Clinton, Billy Crystal, Lennox Lewis, Will Smith and Mike Tyson all in attendance. It was all well and good to be honoring Ali’s memory in his home state, but without tickets, Moodie thought he was destined to experience the service from a distance. The tickets that a kind volunteer offered to Moodie and Lanzillotta, photo by Tony Lanzillotta

“We didn’t have tickets for the service, so we hung around outside the building. We saw a volunteer and I asked her for a button and she said she had none left. Later on, she came up to us and said she had two tickets for us. This beautiful woman, I don’t know her name, but she gave me a gift I’ll never forget.”

When Moodie entered the service, he said there was a palpable air of celebration. While people had indeed gathered to mourn the late star who had passed away from septic shock at the age of 74, many more were there to honor and remember his many achievements and the impact he had on the world both in and outside of the ring. “It was 100 per cent a celebration,” he says. “It was full of love. For one moment in time, everyone was one. He designed his own funeral and he had a rabbi, a Muslim cleric, a Catholic priest, Native leaders and Buddhist chants. We were all in one place for one person.”

When Moodie talks about Ali, he doesn’t just remember the inspirational wins and heartbreaking losses. He remembers the conviction Ali showed when he famously said, “Man, I ain’t got no quarrel with them Viet Cong. No Viet Cong ever called me nigger” when explaining his refusal to serve in the U.S.’s controversial Vietnam War. He remembers the time he rescued hostages from Iraq during George H.W. Bush’s presidency. He remembers his steadfastness, his honesty and his strength.

“He was a black man, he was a heavyweight champion, and when he was drafted, he knew he would have [been expected] to go and shake hands while other young black men were dying for nothing.”

He turned his back on his fame. They stripped him of his titles and he didn’t cry, he didn’t whine, he didn’t mope. He went and spoke at universities as an uneducated man and he made people listen. He was a brilliant man and a humanitarian. He was what everyone should try to be. He lived with Parkinson’s disease for years and he never lost his power. His presence was enough.”

While in town for the service, Moodie got to enjoy relics of his idol’s past. At one point, he even got to represent his home city on the porch of Ali’s childhood home (see photo above).

As for what Ali meant to him growing up, Moodie says the boxer and humanitarian’s famous words helped him grow into the man he is today.

“I never did any boxing, but he made me believe I could float like a butterfly and sting like a bee. Growing up in the 80s, that felt true. Being a young man finding your way as a teenager, hearing things about your colour. [It helped me].”

After leaving the service, Moodie says he felt invigorated.

“I felt high and uplifted. Better than I was before I got there. I’m a better man now. [He showed me] that one man can change the world.”