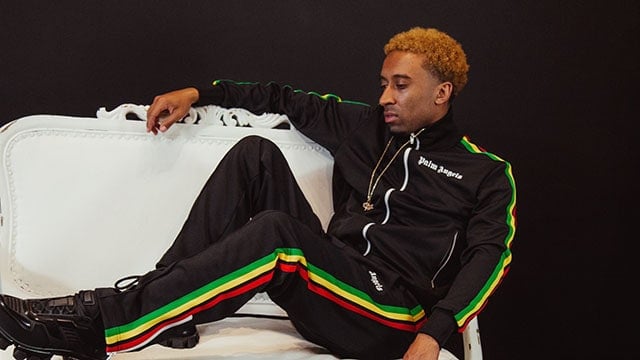 It’s hard to think of something more life-altering–and completely terrifying–than a cancer diagnosis at any age, let alone the incredibly young age of 27.

But for one Mississauga-based rapper, a scary diagnosis and difficult recovery turned into an opportunity to help create a series of limited-edition toys that will raise money for the Leukemia & Lymphoma Society of Canada.

Chillaa (whose real name is Kamal Palmer), a rapper and producer who is best known for producing hits for NAV, RamRiddlz and working with a number of artists over the past decade, says that his body started trying to tell him something when he was in the midst of working on his music last year.

“I released four projects last year so I just kept pumping out music while people were relaxing and thinking everything was shut down. I said ‘no, I’m gonna keep pushing music out so people keep seeing me.’ I was consistent and persistent but my body was kind of telling me that something was going on.”

Palmer says that in November of 2019, he started experiencing night sweats.

“It was really weird and I couldn’t pinpoint what it was, but I knew something was wrong,” he told insauga.com.

Palmer said he visited several different walk-in clinics but never got any answers about his night sweats and a host of other symptoms, including swelling in his left shoulder blade.

“I was feeling chest pains, I couldn’t sleep, I had shortness of breath,” he says.

In August 2020, Palmer was working in the recording studio when the room appeared to start spinning. When he attempted to leave, he immediately felt faint and knew something was terribly wrong.

“One day, I was in the studio and the whole room just started to spin. I got out of the studio and as soon as I walked out the door, I passed out on the couch. It didn’t make sense. I tried to call for help and I passed out again. I had never passed out in my life and my left temple started to pound so I went to the hospital because I didn’t know if it was COVID-19.”

“The hospital checked my vitals, did x-rays and bloodwork and they referred me to a specialist for my chest. I went home and as soon as I was about to sleep, a doctor called me and said, “hey Kamal, you might have cancer.”

Palmer said the news was upsetting, especially since had no family history of cancer of any kind.

“I was like, ‘this can’t be lung cancer because I don’t smoke cigarettes and cancer doesn’t run in my family.’”

Palmer said doctors discovered a 12 cm by 17 cm tumour in his chest that was putting pressure on the second-biggest vein leaving his heart.

“It was building up pressure in my upper back. It looked like I gained 50 pounds in one day and the mass was producing fluid around my heart and I needed surgery on the outer sack of my heart to drain it. I had to do that with no family support [due to COVID], which was crazy.”

Palmer said his doctors were surprised that someone as young as him developed the disease.

“Doctors were shocked because I was so young,” he says.

“I was in the cardiac unit and there were maybe six rooms in there and I was the youngest person there by far. People said I was too young and they have to get me out of there.”

Palmer said his diagnosis was also incredibly hard on his loved ones.

“I almost feel like it’s scarier on the other side, seeing someone go through it rather than being the one with it. [My family and friends] didn’t know what was going to happen and I didn’t know either, but they were really scared. They did everything to help me get through it. They really, really, really helped.”

After he was diagnosed, Palmer’s long road to recovery began with four months of chemotherapy and 20 radiation treatments.

He was declared cancer-free in March 2021.

The lengthy hospital stay and difficult treatment regime would have been challenging no matter what, but the difficulties were compounded by COVID-19-related rules around visitors.

“When I was admitted to the hospital the first time, I was there for two weeks and I only had one visitor per week. It was tough because a lot of my family wanted to come and see me and only one person could come per week, so it was kind of crazy.”

While Palmer was undergoing cancer treatment, he started to do some research on lymphoma and young people affected by it–all while continuing to put out music that he made right before his diagnosis.

As for what helped him get through gruelling treatments in a hospital that could not allow too many visitors due to COVID-19 restrictions, Palmer says talking to his body helped him cope with the chemo and radiation.

“I learned that your mind is actually very, very powerful because during my whole treatment, I didn’t lose any weight and I never even threw up or anything. This might sound weird but I thought I should be able to talk to my body,” he says.

“I literally looked into the mirror the day before my first treatment and I said, ‘listen, body, we’re going to go through a little change right now and I need you to bear with me and when this is finished, we’re going to be stronger than ever.’ After I did that, my body just worked with me. The nausea was there, my lack of appetite was there, but I had to push through it.”

Palmer also said he took inspiration from actor Chadwick Boseman, the Black Panther star who passed away from colon cancer in 2020.

“The day I came home from the hospital was the day Chadwick Boseman died. He had cancer and never told anyone and he was working and doing movies. I said, ‘if he was doing all of this, I have no excuse, I have to be strong.’ He really inspired me.”

When Palmer was told he was officially in remission in March, his family and friends celebrated his recovery with a drive-by event.

“People all drove by my house and they surprised me. My sister [Mississauga DJ Rosegold] set it up and got all my friends and family to drive by, I was so shocked.”

Now, Palmer is focused on raising funds and awareness.

Recently, Palmer partnered with a Canadian company, Makeship, that will be creating limited edition Chillaa toys with a lymphoma ribbon. Palmer will be donating a percentage of the proceeds of the plush toy to help patients who are grappling with the disease.

Palmer also released a Cancer Freestyle music video on May 21.

Palmer says that while his cancer journey was difficult, it taught him the importance of listening to his body and advocating for himself.

“I just want people to not ignore their body when it’s talking to them because your body tells you what’s going on. My body was talking to me non-stop and when I went to the hospital, I got treatment right away. I was on top of it. You have to be on top of it when you’re feeling certain things,” he says.

“I encourage my friends, too. When you’re feeling certain pains and it’s unbearable, go to the hospital. Even if you have to wait a couple of hours, you’ll get the proper treatment.”

As for what Palmer has planned for the future, the sky appears to be the limit for the young artist.

In fact, Palmer is releasing a new album, Luv Hertz, on July 22–which just happens to be his 28th birthday.

“I’ll be releasing a few singles from my next album,” he says, adding that Luv Hertz is a dance/Afrobeat type of project.

“It’s really unique and I’m excited to be sharing that with people.”

He also plans to travel when it’s safe to do so.

“I plan on going to Europe very, very soon and getting out there and performing because they’re pretty much open now. I just want to go wherever I can perform.”