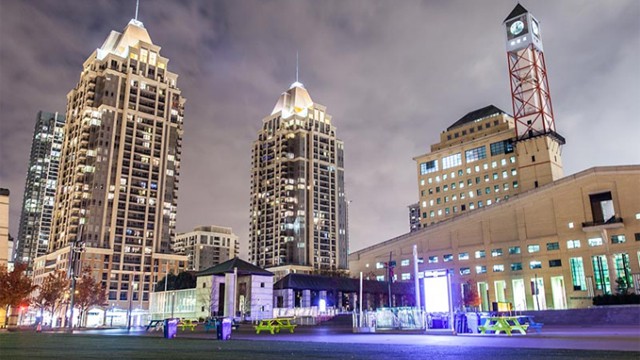 Mississauga has every intention of fully embracing its developing identity as a big city and it’s not afraid to ask the country and province to help it meet the needs of its 700,000+ residents.

Last week, the city announced that, since big cities need new ways to fund infrastructure and other projects, Mississauga was taking action by asking the federal and provincial governments to help bolster its city-building projects and initiatives in their 2017 budgets. Mississauga’s General Committee then approved requests to help fund the city’s top priorities: transit, infrastructure, job creation and partnerships.

In terms of specifics, the city is looking for help with the following:

“Mississauga plays a significant role in driving Ontario’s economy. We always look for ways to help our local businesses grow, while improving the quality of life for all Peel residents. Whether it’s investing $1.4 billion in the Hurontario LRT, supporting the redevelopment of Lakeview waterfront or increasing funding for Trillium Health Partners to reduce wait times and improve hospital stays for patients and families. I thank Mayor Crombie and our city councillors for sharing their priorities on how together we can make Mississauga and Ontario a better place to live, work and raise a family,” said Minister Sousa.

Crombie and Sousa talked about investing in the city and “new dedicated, accountable and transparent revenue tools for municipalities to make important and lasting investments.”

It’s important to note that the city has gotten a significant amount of help from the province on big ticket projects. As everyone surely remembers, the Ontario government is prepared to fully fund Mississauga’s upcoming Hurontario LRT project to the tune of $1.4 billion. Mississauga, much like other cities, is also set to receive more money through the gas tax fund–about $33 million more, to be exact.

With the GTA growing exponentially and Mississauga being as large as it is (even though it didn’t grow much in terms of population over the last five years, according to the 2016 census), all levels of government are focusing on bringing better infrastructure and higher-order transit to municipalities.

With so much talk about growth–and with the LRT and other major developments, such as the M City condo community, on route–now is certainly a good time for Crombie to plead the city’s case.

“We applaud the provincial government’s focused commitment to build regionally-integrated transit and modern infrastructure,” Mayor Crombie said. “With gridlock costing our economy billions each year, a reliable and extensive transit network will help grow the economy and allows businesses to better invest, grow and compete in places like Mississauga.”

During the meeting, Crombie also highlighted Mississauga’s efforts to bring all-day two-way Go Train service to the Milton and Kitchener GO Train lines with the Missing Link Plan and the need for ongoing and dedicated provincial funding for the Downtown Mississauga MiWay Bus Transitway.

“Municipalities and the province need to take urgent action and have an honest debate about how to fund transit with revenue tools that ensure permanent, dedicated and long-term funding.”

Fortunately, it does appear the province is on board–at least in principle.

“Investing in communities like Mississauga is part of our plan to grow Ontario’s economy and create jobs,” said Sousa. “By providing municipalities and communities with an additional share of revenues, we are helping address infrastructure challenges, reduce gridlock and build stronger public transportation systems.”