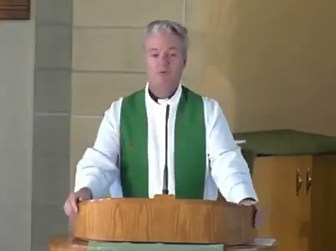 A Mississauga priest has come under fire for defending residential schools during one of his sermons.

In video that was posted on Youtube, Pastor Owen Keenan referred to the residential school in British Columbia where it was recently discovered that the remains of more than 200 First Nation children were found.

“Two thirds of the country is blaming the church, which we love, for the tragedies that occurred there,” he said. “I presume the same number would thank the church for the good done in those schools, but of course, that question was never asked and we are not allowed to even say that good was done there. I await to see what comes to my inbox.”

The remarks were made last Sunday at Merciful Redeemer Parrish in Mississauga.

Even though the video and since been removed, it is being widely shared on social media which has prompted the backlash.

The Catholic church has been widely criticized for its role in the operation of the residential schools which were essentially used to break children away from the indigenous culture. The discovery of the remains of children at school sites in British Columbia and subsequently Saskatchewan has brought outrage across the country and heavy criticism against the Canadian government at that time.

Several users on Twitter have demand that Keenan resign or be punished by the Archdiocese of Toronto.

In a statement made to the CBC, Keenan said his message was meant to help his congregation struggling with the criticism of the church.

“I am deeply sorry, embarrassed, ashamed and shocked at the revelations of abuse, destruction and harm done in residential schools across this country,” he said in the statement sent to the CBC. “I in no way condone the system …  As a Catholic and a priest, I wish I could say ‘I’m sorry’ to everyone who suffered harm.”

The Archdiocese of Toronto also issued a statement saying, “We apologize to anyone offended by his remarks.”

Mississauga Mayor Bonnie Crombie, who is member of the Merciful Redeemer Parrish, also condemned the statements made by Keenan.

The mayor said she has spoken to Keenan and that he has apologized and will strive to educate himself on the role of the church with residential schools.

Keenan has also come under scrutiny for his criticisms of Catholic schools that have been flying the Pride flag.

My relative was repeatedly sodomized in these so-called good schools.

This whole “Residential Schools weren’t all bad” rhetoric is abhorrent.

Last month’s news should have put to rest any of that racist sentiment.