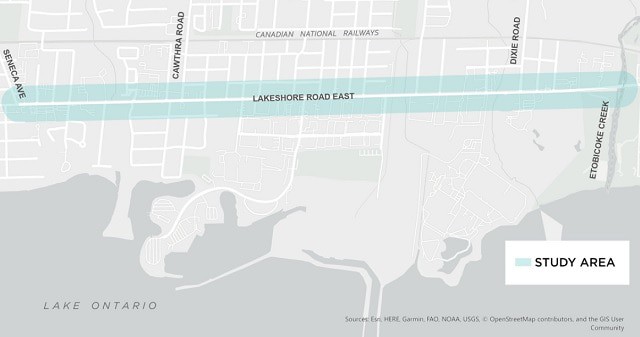 Mississauga residents will have a chance to offer ideas and input about how to develop the Lakeshore East area over the next two decades as the city’s population is expected to grow to 1 million people.

The City of Mississauga announced Thursday that registration is open for a virtual community meeting that will take place on Thursday, June 10 from 6:30 to 8:15 p.m. Residents and business owners will have a chance to review the preliminary recommendations for urban design and policy directions to manage growth in the Lakeshore East Corridor.

Those preliminary recommendations were shaped following three community workshops held in early May.

The city’s review of the built form, density and height along the corridor, between Seneca Avenue and Etobicoke Creek, began this past winter. The June 10 meeting is part of the start of the third of four planned phases of the study. The study is expected to be finalized in the fall of 2021. It is part of the city’s Lakeshore Connecting Communities Master Plan.

According to the city’s website, the municipality’s Lakeshore Connecting Communities Master Plan lays out how the Lakeshore Corridor could develop over time, providing information about how the city might optimize roadways, improve transit and enhance cycling and walking connections.

“The plan builds on recent planning studies to develop a design for the Lakeshore Road corridor from building face to building face that supports all modes of transportation, connects people to places, and moves goods to market. It also evaluated rapid transit alternatives east of Hurontario Street as well as extending rapid transit into the Port Credit area,” the website reads.

The Lakeshore East Corridor study does not include the former Ontario Power Generation site. It is part of a separate planning application process.

Image via Wikipedia; graphic via the City of Mississauga.