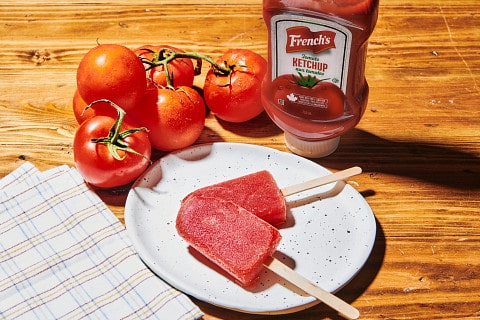 French's Ketchup will debut the "Frenchsicle," its new limited-edition ketchup-flavoured popsicle, to celebrate the first week of summer. FRENCH'S PHOTO

With the summer heat here, residents from Mississauga and Brampton to Oakville, Burlington and Oshawa will be looking for a cold treat to cool off.

Now they can reach for a Frenchsicle. That’s right, a frozen ketchup stick.

French’s® Tomato Ketchup flavoured popsicle will be available at popup locations across Canada starting this Wednesday (June 22) until June 24.

Or people can make their own batch of Frenchsicles by visiting here for the recipe.

Made from 100 per cent Canadian tomatoes, the savoury and sweet ketchup popsicle makes for unique and refreshing treat.

The frozen treats are made in collaboration with Happy Pops, a local Canadian business specializing in all-natural ice pops made from real fruit and sweetened with organic cane sugar.

Oakville residents will have to make the trek to Toronto or Leamington to find a popup location though. The Frenchsicle will also be available in Vancouver, B.C.

A recent survey commissioned by French’s found 79 per cent of Canadians say they like or love ketchup, making it a notable flavour of summertime in Canada.

And almost all Canadians who like ketchup (78 per cent) think it’s important to buy ketchup made with 100 per cent Canadian tomatoes.

As well for every Frenchsicle given away, French’s will donate two meals to Food Banks Canada to address food insecurity in Canada, expanding the partnership that began in 2015.

French’s Ketchup will be popping up to handout Frenchsicles at the following locations: