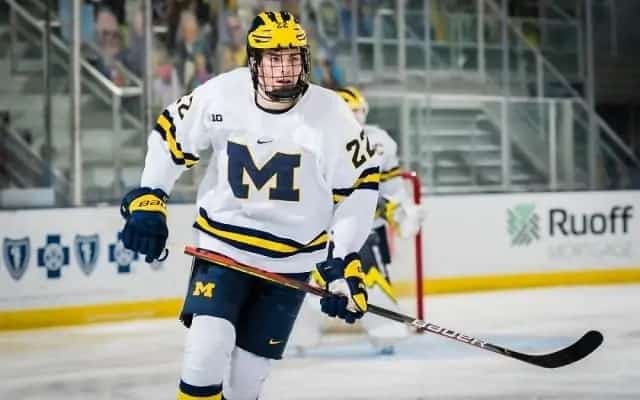 The Canadian team played only two games before the World Junior Men’s Hockey Championship was cancelled, but Mississauga native Owen Power made quite an impression in the pair of contests.

The 19-year-old defenceman, selected first overall by the Buffalo Sabres in the 2021 NHL entry draft, notched three goals in a 6-3 win over the Czechs on Monday. Two of the tallies came on the power play.

In finding the back of the net three times, the 6-foot-5, 214-pound Power became the first Canadian defenceman to record a hat trick in the tourney’s history.

He likely would have set another record as well had the championship not been cancelled due to lost games to COVID-19, that of most goals in a tournament by a Canadian rearguard. That mark is held by the Ottawa Senators’ Thomas Chabot, who scored four goals in the 2017 tourney in Montreal.

In the two contests Canada played (the other was an 11-2 drubbing of Austria), Power had three goals and two assists.

Get to know #WorldJuniors standout Owen Power in the #GTHLBreakoutMagazine ⬇️

The former Mississauga Reps captain became the first defenceman to net a hat trick for 🇨🇦 in the opening game vs. Czechia.

The annual Christmas season tournament, being held in Edmonton and Red Deer, Alta. this year, was cancelled late yesterday after a growing number of games were lost due to COVID-19.

Power and his Canadian teammates were scheduled to play their third preliminary-round game on Wednesday night against Germany.

A former captain of his Mississauga Reps team, Power played junior hockey in the U.S. before moving on to the University of Michigan, where he suited up for the Wolverines hockey squad.

The Wolverines did not release Power to the Canadian junior team last year, so this week was his first taste of the major international tournament.