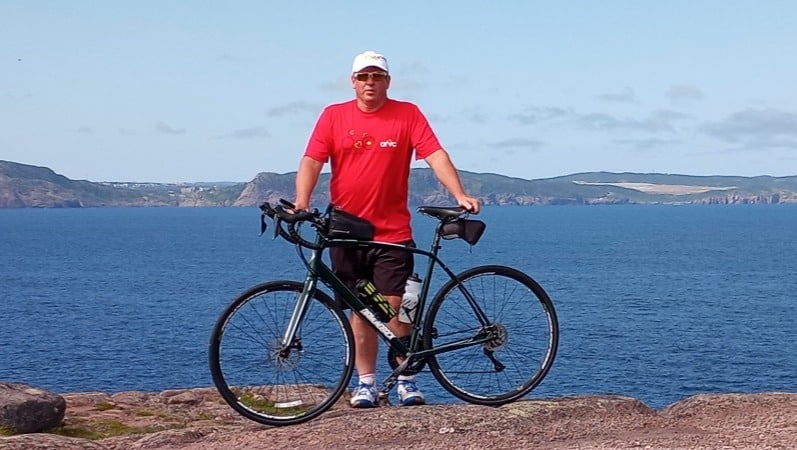 Wind, rain, cold, blistering heat or living out of a trailer, nothing can get him off his bike and slow down his fight to conquer the heart disease that left his 23-year-old son Greg in a brain damaged and vegetative state and killed his wife Jackie 20 years ago.

“I couldn’t possibly follow a challenge on the bike that’s anywhere near harder than what Greg is going through,” says Hoerdt, who recently completed the first trek of the ARVC Bike Ride for Greg he began in St. John’s, Newfoundland earlier this summer.

He will begin the second 10-week leg of his trek next May in Victoria, B.C.

“That’s what has kept me peddling every day,” he said. “There’s no weather conditions, nothing in front of me when I’m out riding a bicycle that can compare to what my Greg, my (other son) Ben, what my family is dealing with this when they have this disease.”

Hoerdt says all those factors really don’t even make a difference in his day.

“They’re nothing,” says the former teacher who has quit his job to focus on this. “I just drive through, because if the rest of them can be dealing with this, being sick and dealing with the stuff they have to deal with, the least I can do is pedal a bicycle in some crappy conditions.”

The 51-year-old father has set out to build a foundation with three goals.

Along with looking to raise awareness of a disease that he says isn’t rare, but one people don’t know about, he’s also looking to provide a family support network. Somewhere families going through this can turn to.

Which is what their website (arvcfamilysupport.org/ride-across-canada) is all about. Hoerdt says a dozen families have already connected with him.

“We’re just getting started and we’ve already got people coming out of the woodwork, ‘Yeah, we’ve got this too or we had people who died young of sudden cardiac arrest and we don’t know why.'”

Hoerdt says the families are already starting to help each other out.

“It totally drives me to want to do more and really make a big deal about this, and push a little harder,” he said.

The third goal, says Hoerdt, is a sponsored fellowship. He’s looking to raise $75,000 for a research fellow to work at the Peter Munk Cardiac Centre at the UHN in Toronto.

“So we’re basically paying for another doctor to join the research team in Toronto that is already working hard to try to figure this disease out,” he said.

Hoerdt lost his wife in 2001 when she collapsed while they where playing softball in Milton. The 31-year-old had a sudden cardiac arrest.

“We had no idea why and they weren’t able to give us a reason and couldn’t figure it out,” he said. “They just left it up to that something went wrong with her heart.”

In 2018, 17 years after Jackie’s death, Greg suffered cardiac arrest while on his co-op work term with Purolator in Mississauga.

“The health and safety people at Purolator got right on him right away. Got an AED on him and started CPR and saved his life,” Hoerdt said.

Greg was taken to Trillium Hospital in Mississauga and there he would suffer three more cardiac arrests. It was then that Hoerdt explained to doctors what had happened to Jackie 17 years earlier.

Hoerdt said doctors, through a lot of hard work and research, would get find out what happened. They tested Jackie’s heart tissue and Greg genetically and discovered that both had ARVC.

“So, it wasn’t until 17 years later that we knew why Jackie died,” Hoerdt said.

Hoerdt understood that sometimes in medicine and science there isn’t an explanation for something. He was “OK” with not knowing the details.

“When I did find out why, it certainly brought some closure to things,” he said. “But also, at the same time now, I’m dealing with my son and who else now has this damn disease.

“It was kind of a mixed blessing to learn that. I’m glad we knew Greg had it so now maybe we could do something about it because he was expected to be fine when he was released from the hospital.”

Hoerdt would have his family tested for ARVC and it turned out Ben, his younger son, and six others in the family, including Jackie’s brothers John and Mike, have it.

“It slammed us pretty darn hard,” he said.

Hoerdt thought Greg would be fine moving ahead. He had a defibrillator implanted and he was taking meds to minimize the risk.

Two years later, though, it happened again in September of 2020 when Greg was living in an apartment in High Prairie, Alta.

Hoerdt isn’t sure if he called 911 himself and then passed out.

“His defibrillator went of 30 more times, but his heart didn’t respond. So we don’t know why, we don’t know what happened,” Hoerdt said of what happened to his son. “It took paramedics over an hour to get to him at that time and now he’s brain damaged. He’s in a vegetative state.”

Hoerdt says the biggest way people can support them is to share their story whether it’s by word of mouth, by following his ride, through social media or by talking to their doctors.

“We know the family support will work, it’s already started working and we know donations will start coming in for the started fellowship, so share, share, share.”

For more information, check out the website at arvcfamilysupport.org/ride-across-canada or on social media at #ride4arvc.

Donations are also being accepted at https://www.gofundme.com/f/arvc-bike-ride-for-greg.