Voters from the provincial riding of Mississauga-Erin Mills got to hear from three of the candidates running to be their MPP recently in a debate organized by the Churchill Meadows Residents Association at Stephen Lewis Secondary School. 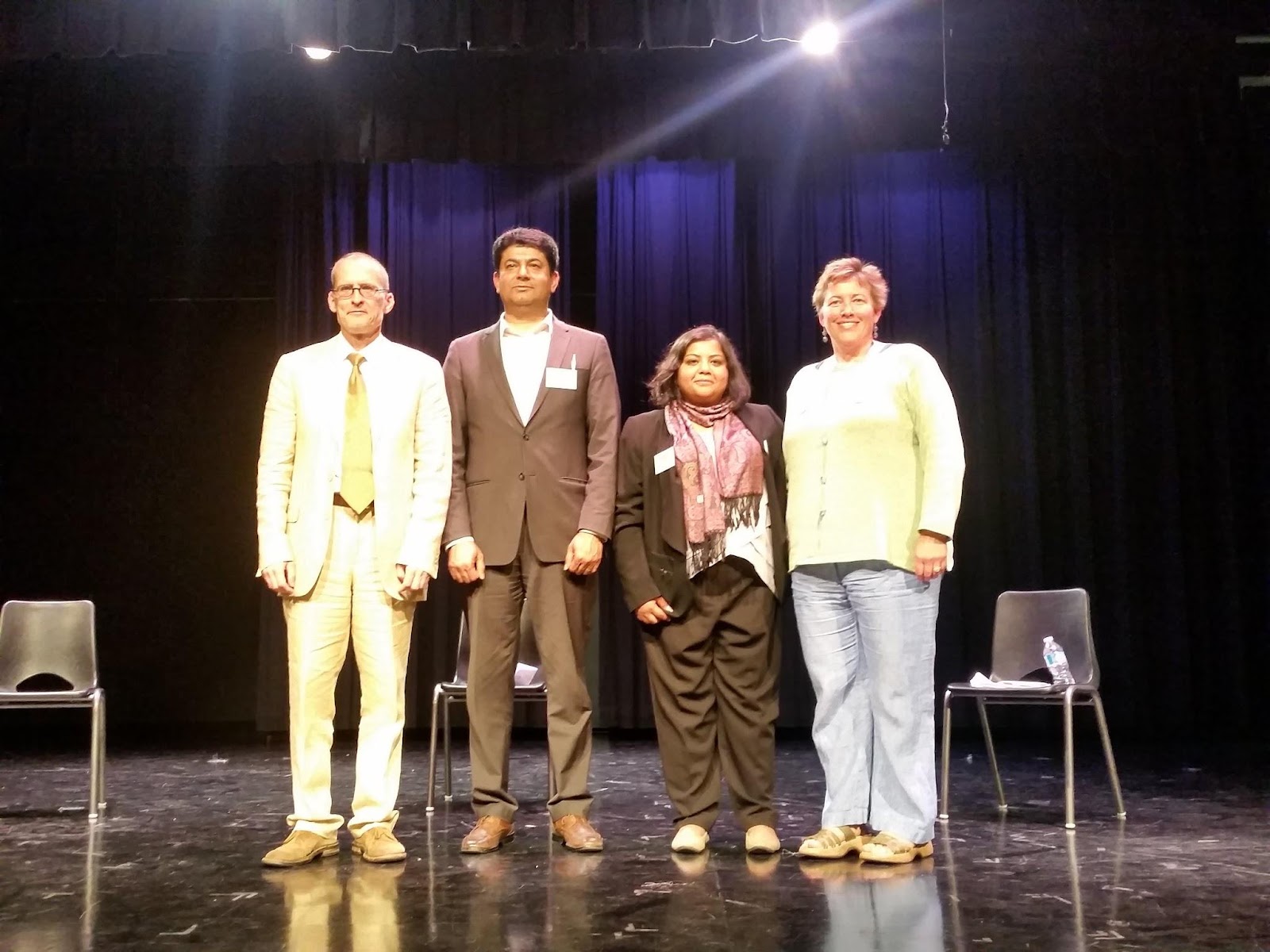 Unfortunately, the mix of red, green and orange tinted opinions were conspicuous by the absence of the expected dose of blue. PC candidate Sheref Sabawy did not attend the debate; organizers say Sabawy required his party’s permission to attend, and that he wanted the format and questions to be asked in advance. 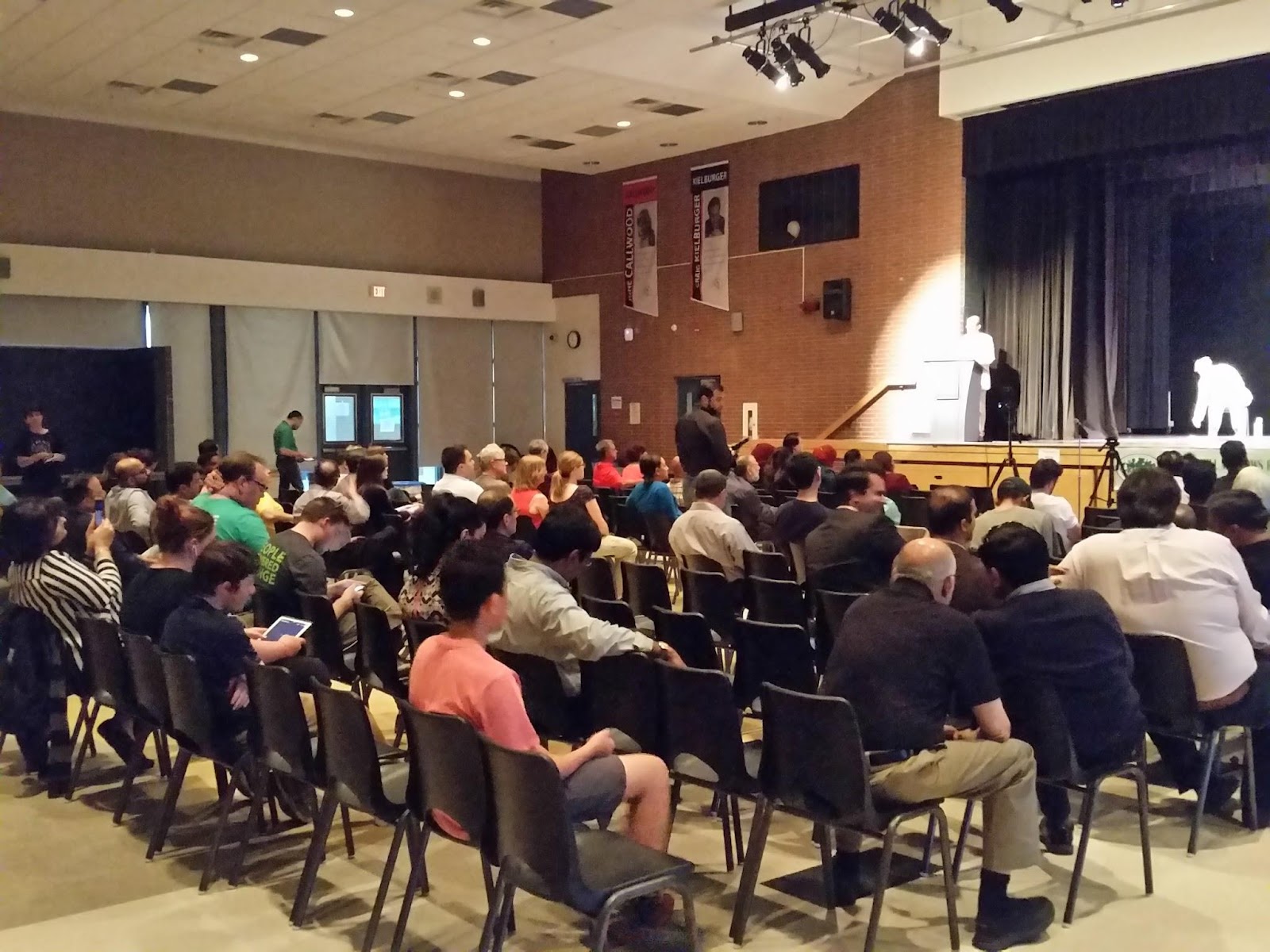 The candidates who were present (Mian, Hassan and Yuill) were asked for their positions on a variety of topics such as the minimum wage, hydro rates, housing, hospital wait times and the sex-ed curriculum. Mian and Hassan gave out the familiar lines that were respectively from their party’s platforms, but Yuill’s delivery of her remarks felt more personable.

Hassan, a single mother of an eleven year child with a disability, stressed that the economy needed to work for the people, not the other way around. Mian spoke of believing in the investment of people, based on his background as a vice president of sales at an IT company, but sounded like he was stumbling somewhat on delivering his lines.

Yuill was the one who seemed most at ease at speaking on a long term plan for sustainability living in Ontario, promising that a Green government would be guided by the notion that empowering people and environmental stewardship was the key to a new economy.

She spoke on the need to shift away from fossil fuels and toward wind and solar, saying while nuclear power was clean on the surface you would still to figure out how to store the residual waste product. With only one planet to do that one, Yuill concluded that nuclear power would not be sustainable in the long run.

Without the PC perspective to provide more a conservative viewpoint to counteract the mostly left-of-centre perspectives of the other candidates, it was difficult to ascertain any sparks during the debate, although there were some.

The Liberals and NDP got into a dispute over the $3 billion “hole” the Liberals recently claimed was in the NDP platform, claiming that there were actually billions of cuts in the document. Hassan charged that the fudgy accounting was actually coming from Liberal finance minister Charles Sousa, and it was rich for Liberals to make their claim when the provincial auditor general said the deficit was higher than what the Liberals projected.

“How could educated people believe them,” Hassan retorted, referring to the Liberal government, to cheers from NDP supporters in the audience.

That brings up another point about these debates: they are usually stacked with partisan supporters from opposing candidates and turn into exercises of self aggrandizement for the crowds present to give the impression that one candidate is ahead. For example, there was one particularly obnoxious young man sitting in the front row who was shouting out talking points of his own while the NDP candidate was speaking.

Maybe Sabawy had the right idea of skipping the debate to go door knocking and actually drumming up votes, if that was indeed what he was doing.

Here are some of the segments during the debate on various topics that were asked of the candidates. This one is about hydro rates:

“How can you fire a CEO of a private company as a government,” Hassan asked, referring to Doug Ford’s promise to fire the head of Hydro One if elected.

On affordable housing, Mian brought up the video in which Ford said he would open up the Greenbelt for development. Interestingly enough it was Green candidate Yuill who corrected the Liberal that the PC leader actually changed his mind on that idea after these answers, so there was some concealment on Mian’s part.

The Green candidate also highlighted her party’s stance on changing the zoning laws in Ontario to allow a deeper variety of housing, tiny houses for example, as a plethora of housing options in order to provide more affordable units.

On the minimum wage

Finally, on a question about the sex education curriculum, it seemed all the candidates were taking minor cues from the Ford stance about the need to have consulted more and the need to educate children to be safe.

I guess when you have a riding with such a high number of South Asian immigrants, an issue like sex education would require any candidate to tread carefully. Mian himself is a practicing Muslim and his own response reflected his community’s sentiments towards the policy.

For a full list of candidates running in the Mississauga Erin-Mills riding, click here. Peel Region always gets a spotlight whenever an election campaign gets underway, so paying attention to who is running to be MPP in the city’s ridings is rather important.

New Jamaican patties take-out spot is now open in Square One in Mississauga
There’s nothing like getting a whiff of fresh Jamaican patties while window shopping at the mall.
END_OF_DOCUMENT_TOKEN_TO_BE_REPLACED