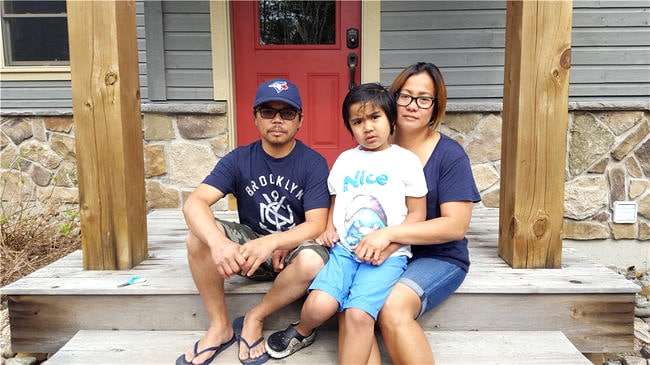 In the developed world, most people don’t expect the cops to show up at their door after they threaten to protest an issue.

Palaypayon attempted to meet with her local MPP Bob Delaney to talk about new provincial autism rules, which would prevent her six-year-old autistic son Xavier from qualifying for intensive behavioural intervention (IBI).

However, she was constantly being told by Delaney’s constituency office that he couldn’t meet with her due to scheduling conflicts.

Growing tired of this, she called the MPP’s staff Thursday morning and said she would squat there and hand out flyers protesting against the new rules. Cops showed up at her door the next day at 8:50 a.m., following a complaint from Delaney’s office.

“I am shocked and intimidated,” Palaypayon told the Sun. “I asked myself, ‘Is protesting prohibited here?’ or ‘Are they making a statement that we can’t call MPPs now?’ Why are they sending two police officers? I am alone, I am a mom of an autistic kid. I told them I would not be holding the door. I did not swear. My tone is aggressive and I can be persistent… but I am not a wrestler.”

The autism rules she is fighting against will stop children five and older from being eligible for IBI paid for by the province.

This will remove more than 3,500 families from treatment wait lists, and force them to pay for private therapy that can cost as much as $50,000 a year.

“I will try my best to give Xavier what he needs. I see a lot of potential in him.”

Delaney shared his side of the story, claiming his call to the police was not meant as an intimidation tactic but a safety concern.

“We had one parent who was over the line with her actions,” he said, referencing the 10+ phone calls he received from Palaypayon in one week.

“The number of times she would call the office, essentially to have identically the same conversation. The tone and remarks she would use. She is very clearly seeking a confrontation.”

He added that his two staffers were verbally abused but would not go into details, saying “it’s between me and the constituent.” He also said he didn’t realize the police would visit her home when he filed his complaint.

Peel Regional Police could not discuss the details of their visit to Palaypayon’s residence.

“We have a responsibility to follow up any complaint,” Const. Rachel Gibbs said. “But we can’t comment on this because it’s a private matter and there was no risk to public safety.”

Palaypayon, who maintains that Delaney inaccurately portrayed her actions, plans to organize another peaceful protest outside his office in the near future.