A prominent Jewish organization in Canada has again raised the matter of a Mississauga Member of Parliament’s association with a purported ‘radical activist’, despite a previous disassociation by that MP regarding that individual.

In a recent post on their website, B’nai Brith Canada showed a photo of Mississauga Erin Mills Liberal MP Iqra Khalid, who is seeking another term on the October 21 federal election, meeting with members of the Palestinian Canadian community at the home of Amin El Maoued, which was also posted on Facebook.

As previously documented by insauga.com, El Maoued has been linked to a group called the Palestine House, who had their federal funding cut by the previous Conservative government in 2012 after a “pattern of support for extremism”.

He led in 2017 what was described as a “hate-filled” rally ladened with anti-Semitic slogans, including “Israel and Hitler are the same.” Khalid later rescinded a community service award she gave out to El Maoued after B’nai Brith circulated a petition asking for that certificate to be rescinded. 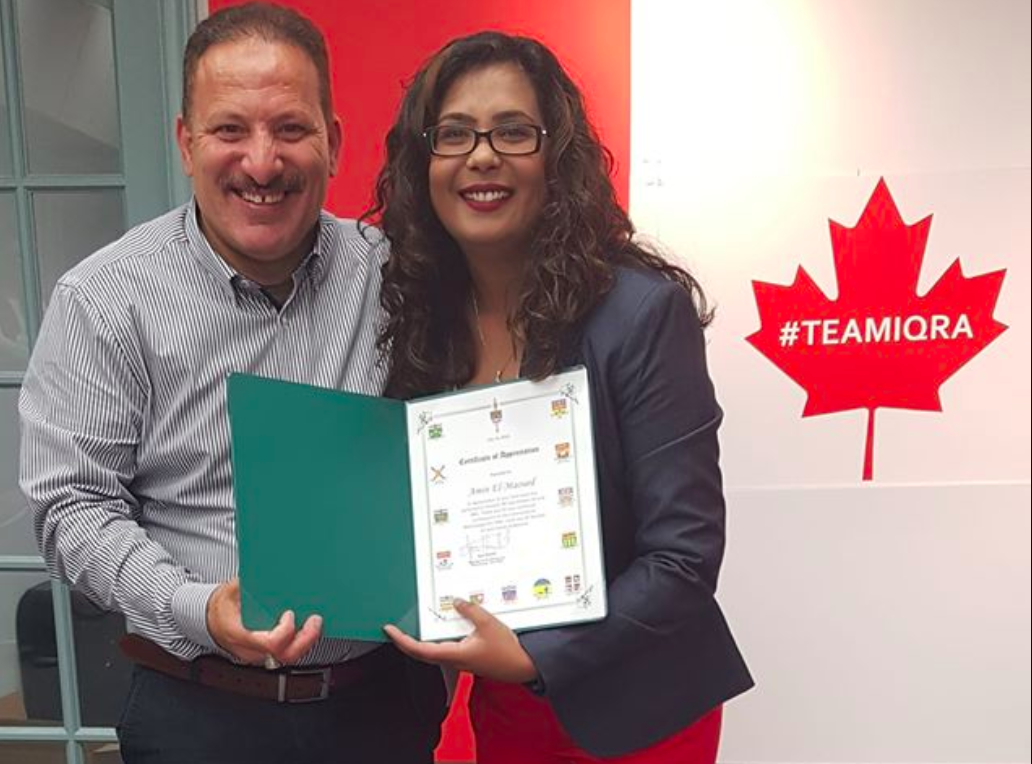 “It is difficult to fathom how Ms. Khalid did not learn from the previous ordeal,” said Michael Mostyn, Chief Executive Officer of B’nai Brith Canada. “Her renewed association with Mr. El Maoued calls into question not only the sincerity of her previous apologies, but her credibility as well.”

B’nai Brith’s post referred to the Facebook post and how Khalid allegedly went as far as to apologize to El Maoued at his home for her previous condemnation of him. Defending Khalid, El Maoued wrote that “the bulk” of the criticism against him was directed, in part, by “the Zionist lobby” whose goal was to “crush” Khalid and “delegitimize (sic) Islamophobia.”

Why does Trudeau keep standing by @iamIqraKhalid, who continues to associate with the same known antisemitic extremist she “apologized” for honouring last year? Why do antisemites feel so welcome in Justin Trudeau’s Liberal Party? https://t.co/8GOj8ioGMp

In response, Khalid published this letter she sent to B’nai Brith addressed to Mostyn:

“I understand you have expressed concerns over the presence of Amin El Maoued at the meeting. Since the date of the article you shared in your email, Mr. El Maoued has publicly stated multiple times that he stands with and supports the Jewish community against anti-semitism and all forms of discrimination,” Khalid said, adding that she invited B’nai Brith Canada to ‘engage with me in my riding’ in prior meetings over the past few years.

The Mississauga MP also spearheaded a private members motion to denounce religious discrimination, including Islamophobia, which received criticism from many quarters during the last parliament.

Mostyn replied to the letter with these tweets on September 29, one asking Khalid to show where El Maoued apologized, saying he’s still ‘ranting about the Zionist lobby’ on Facebook.

Thank you @iamIqraKhalid for your response letter to me, regarding our concerns from @bnaibrithcanada. Can you show us where El-Maoued has apologized, “multiple times”, for everything you once condemned? He’s still ranting about “the Zionist lobby” on Facebook. 1/2

Mostyn also pointed out that the meeting was not just ‘some meeting’; it was a meeting at El Maoued’s home.

You didn’t just happen to meet El-Maoued at a meeting; you accepted a personal invitation to host a meeting at his home. 2/2 #cdnpoli

Whether it’s Khalid’s relationship with El Maoued or various Conservatives being caught in photos with self described ‘white nationalist’ Faith Goldy, it seems candidates from the two main parties are getting caught with people who have expressed very controversial views thereby being labeled ‘guilty by association’.

The Liberals have had criticism leveled at them for seemingly associating with people harbouring anti-semitic viewpoints. Besides El Maoued, former Montreal Liberal candidate Hassan Guillet was dropped by the party after it was revealed that had made comments on social media supporting a Hamas-aligned activist who has accused Jews of staging the 9/11 terrorist attacks, claiming that Jews used ‘children’s blood for baking ‘holy bread.’

But the irony is the Liberals have been beating this drum that the Conservatives have been harbouring or associating with those with racist, neo-Nazi or alt right viewpoints; Scheer’s campaign manager Hamish Marshall once worked for the controversial Rebel Media, which spouted numerous pieces many have called Islamophobic, and Goldy once worked for the organization as well.

With the examples just provided, it seems the two main parties vying to become Canada’s next government come October 21 both have controversial “bad apples” lying around in their midst.

It remains to be seen if voters care about such associations.

Square One set to reopen this week in Mississauga
After initially being held back from entering Stage 2 of the province’s three-phase reopening plan, Mississauga has finally been given the green light to allow more businesses to open their doors.<
END_OF_DOCUMENT_TOKEN_TO_BE_REPLACED