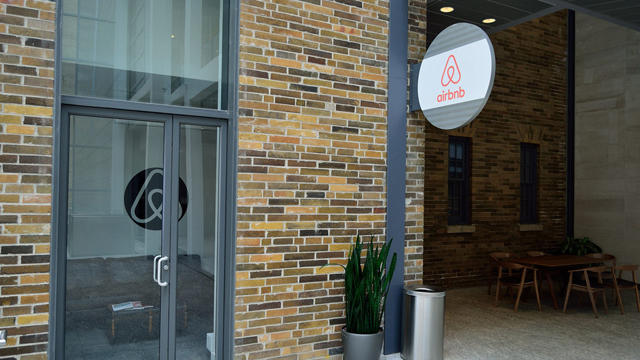 As Insauga reported earlier this week, the city of Mississauga conducted an open house on Monday regarding proposals to deal with Short Term Accommodations (STAs) in the city, the most common platform being Airbnb. The city is looking for suggestions on what they could propose in order to monitor the proliferation of STAs that have emerged in Canada’s sixth largest city in the past few years.

They had a number of handouts in the Committee Room across from the city council chambers for this open house, which ran from 3 pm to 8 pm. If you did not have time to complete the online survey that was promoted, you could also do it on paper. One statistic of note (which you can see in the photograph below) is that around 61 per cent of STAs in Mississauga consist of entire homes and 38 per cent aer private spaces, with only one per cent being shared rooms. Other statistics include: 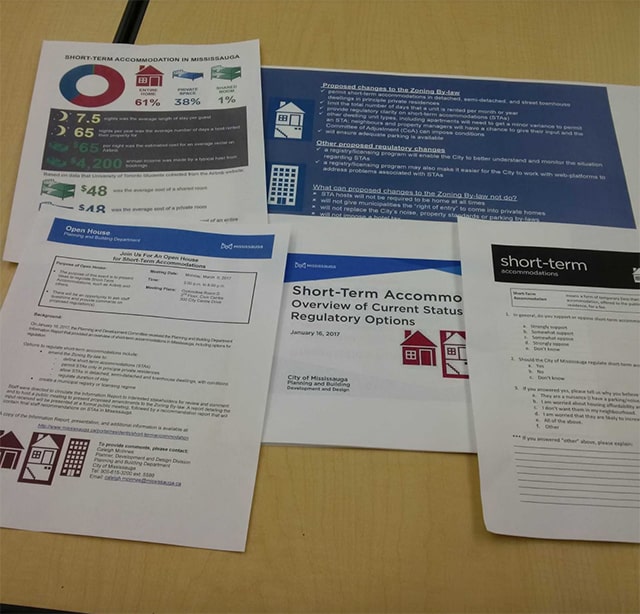 One of the other areas city staff are looking at is possible changes in the zoning bylaws, amending them to address STAs. The dark purple list on the top right outlined some of those considerations regarding by-law amendments and what cannot be done:

Proposed Changes to the Zoning By-Law:

What can proposed changes to the Zoning By-law not do?

Let’s be clear that these are only proposals and not concrete amendments the city is implementing. But based on these suggestions, it would seem that there will be a more prominent role for the Committee of Adjustment in the future when people are looking into making their property a STA. However, from these proposals it does seem that there is a preference for STAs in detached/semi-detached homes and townhouses but some more stringent guidelines proposed for apartment STAs. It almost sounds like a bit of a double standard between different dwelling types.

There was an interesting question posed during the open house regarding the proposed STA registry. Someone asked if the information gathered would have to be reported to Revenue Canada. As Revenue Canada primarily deals with income taxes, not property taxes, there likely won’t be any involvement with Revenue Canada in any new regulatory framework Mississauga comes up with for STAs.

And no, before you get all nervous about having to pay more taxes, there is not going to be a hotel tax on STAs in Mississauga. Unlike Toronto, which has a City of Toronto Act that gives in certain powers to create new revenue tools, Mississauga is under the jurisdiction of the Ontario Municipal Act, and making up our own taxes is not one of the powers Mississauga has as a city. If that was the case, overzealous politicians would have done it a long time ago!

I’ll finish this analysis with some comments left by residents on post-it notes that were plastered on the walls of the committee room, the format for which was soliciting answers from residents for questions posted on the walls by city staff.

While no one put comments saying ‘STAs should be banned outright,’ there were more comments asking for more restrictions on STAs from owners of rental apartment buildings. One resident commented that allowing apartment buildings to host would only be competition with hotel and service apartments (this guy sounds like he works in the hospitality industry). And someone else suggested that STAs in this category should only be limited to four units per host.

Finally, some people seemed to believe it’s better for the host to be on the premises during a tenant’s rental period to monitor things and make sure no issues arise/can deal with issues if they occur. It’s not always the case every time (my last Airbnb stay was in an unoccupied house and we never met our host), but as a precautionary measure to prevent rowdy guests from being a nuisance in neighbourhoods, it’s a good idea.

Some intriguing issues to mull over as Mississauga figures out how to deal with STAs.