Leafs still have a chance to raise Stanley Cup in 2020
Bonnie Crombie says Mississauga can only test about 400 people for COVID-19 a day
MAYORS COVID-19 UPDATE: Bonnie Crombie give an update on COVID-19 in Mississauga - May 26, 2020
Heat wave forces cities, long-term care centres to rethink how to offer heat relief under COVID-19
Multiple vehicles blocking all lanes on 401 in Mississauga

While there has been concern that the municipal election in Mississauga had become more insular due to the fact that no one organized a mayoral candidates debate, at least one group stepped up recently to do so.

Recently, students and residents were treated to a candidates forum organized by the University of Toronto—Mississauga Student Union. The event was held in the UTM Innovation Complex Atrium as part of a campaign by the Canadian Federation of Students called Vote Local to raise awareness of municipal election issues. 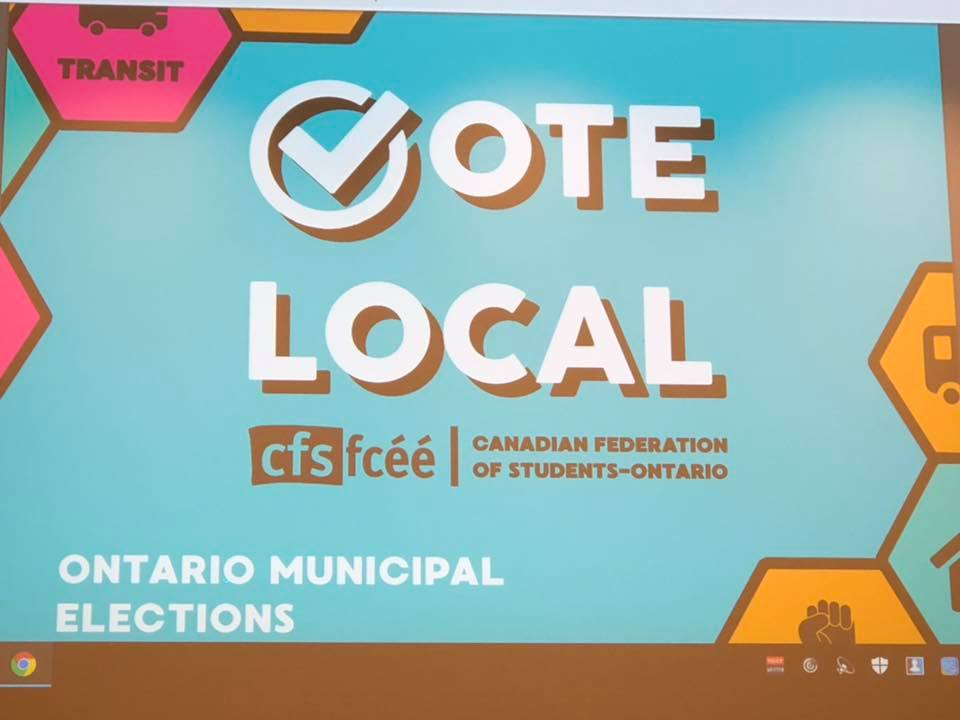 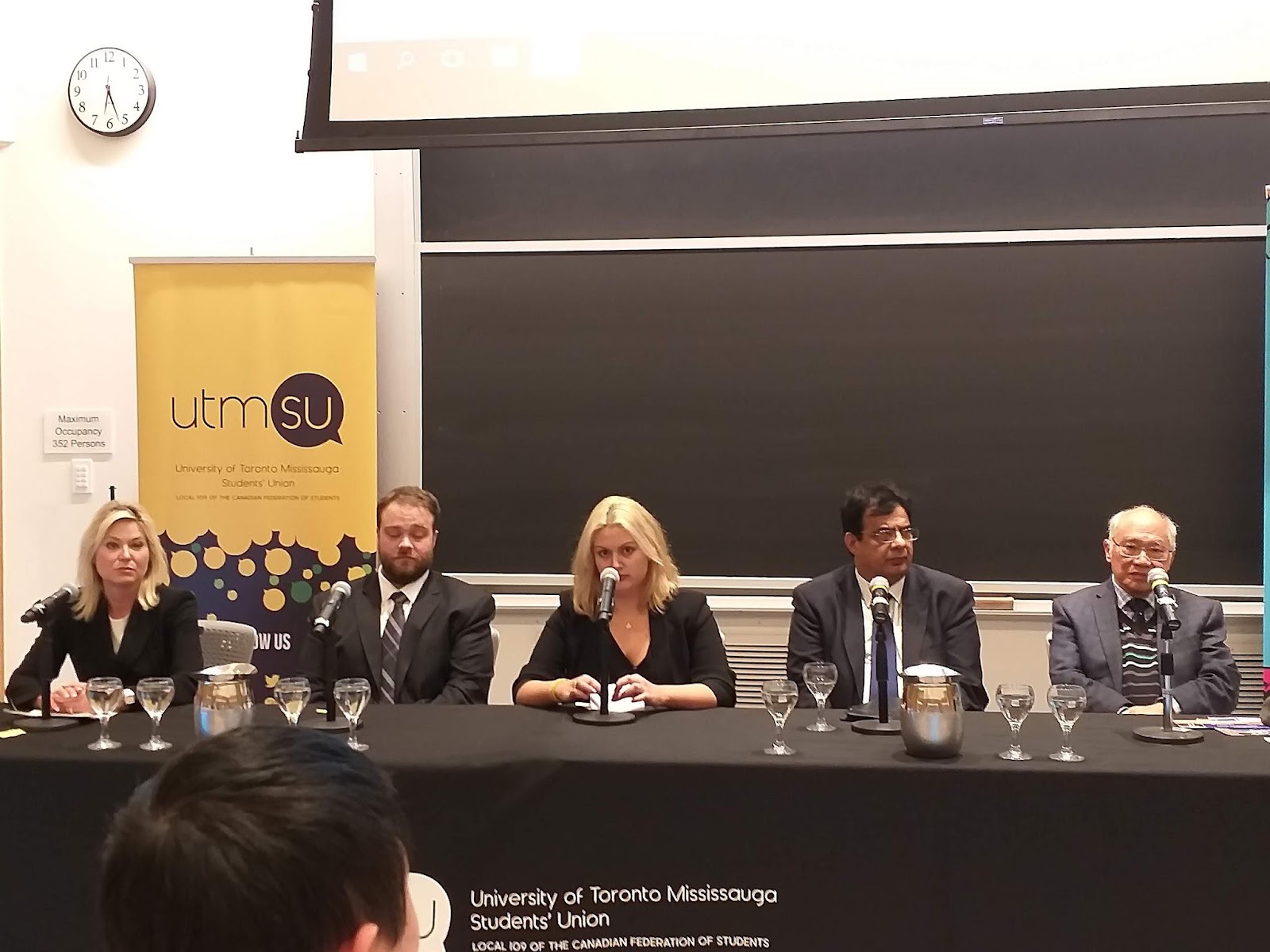 Before the forum began, a brief commotion happened as a fringe candidate, who was charged by Peel police for hate crimes last year, attempted to join the debate. Organizers from the students union say, because of divisive viewpoints and other hateful rhetoric, he was explicitly told he would not be invited for these reasons.

You could say that this was an example of overreach by the student union (or "protecting the snowflakes", as some might say), but considering this particular candidate's perchant for making himself the centre of attention, it was a blessing in disguise as the forum allowed the focus to be on the other candidates—and on what they had to say about leading Mississauga.

Despite four other people sharing the dias, incumbent Bonnie Crombie held her own and touted the "progress made thus far in the last four years" that she has been mayor. 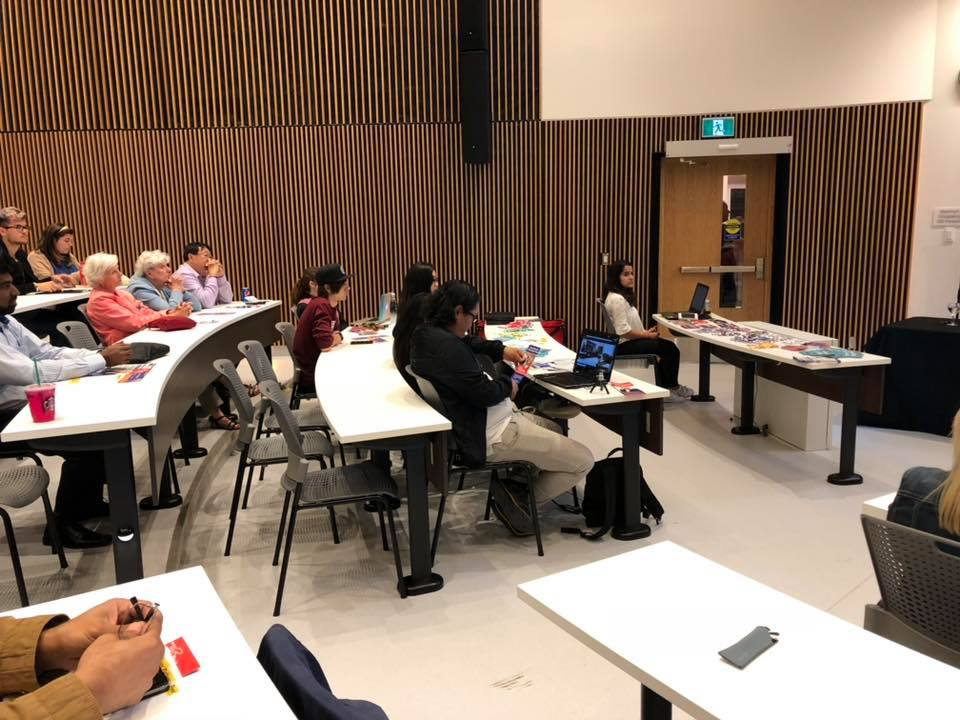 "We are the envy of cities right across the GTA," says Crombie, emphasizing how her 'team' on Mississauga council has implemented policies to keep housing affordable (Making Room for the Middle) and keeping the city safe. "We will continue to invest in transit (bringing up the $2 billion in provincial / federal funding for infrastructure) and bringing new jobs and business investment into our city," the mayor continued.

The other candidates opening statements were not as elaborate as the mayor; Syed Qumber Rizvi (who previously was running for council) said he wanted to build more affordable housing for single mothers and low income families.

Scott Chapman, who also ran for mayor in 2014, said one idea of his would be to give a tax credit for those who installed solar panels on their homes.

Yasmin Pouragheli, a 26-year-old political science graduate from the University of Windsor, is advocating for legislative reform to help municipalities raise revenue.

"Cities rely on the province to get money, and the municipal act has limits for that. We need exceptions carved out for Mississauga," said Pouragheli.

Andrew Lee, a retired engineer, said "seniors are assets, not burdens," and the city should be leveraging their wisdom to provide better standards of living for Mississauga residents, while adding that as mayor he would do what he can to help young people make their first step to getting a job. He also brought up how the fringe candidate contacted him and wanted him to drop out so he could take over endorsing his platform.

"I've never met this [man] in my life and I had no idea who he was," Lee told the audience.

The candidates then took a number of questions from the students union then the residents, but some of them delved outside municipal government. Here's a sampling of what was asked.

Will the Hurontario LRT be scrapped by Doug Ford:

"I've informally discussed the matter with Premier (Doug) Ford and talked to cabinet ministers, and they are very aware how vital this is to our growth and development," Crombie said, adding that development of the Hurontario LRT is crucial to Mississauga's growth, and that there's no indication that the PC government will back out now.

"I don't think the LRT will be an issue going forward. But if he (Ford) reneges, I will have a war in the media with him," responded Chapman.

"It's been in talks for a long time now, and it should have been implemented under Hazel McCallion. Now that it's something the city is pursuing full throttle, Mississauga needs the upper hand in contract negotiations," Pouragheli said.

The only one that did not support the LRT was Rizvi, saying an east-west connection was more important while bringing up more futuristic options like "flying cars."

Chapman says while immigration is mostly a federal issue and that not much can be done at the city level, he suggested a 10 per cent community housing tax and encouraging older people to rent out bedrooms for students. "It gives residents additional income and provides housing for people in need."

Pouragheli offered her thoughts on the matter.

"It comes down to supply and demand. We need to remove barriers so developers can come in and invest in affordable homes. Micro-apartments in Europe, for example. We're not implementing the housing right now we need for students," said Pouragheli. On immigration, she wanted to create a network of people who can help newcomers, something akin to a mayor's immigration office (patterned after some in U.S cities) to expand networking for new immigrants.

Crombie cited how under her term, Mississauga became the first municipality to approve secondary units, as well as the city's "Making Room for the Middle" plan on affordable housing. But she also said the city needed to look at Inclusionary zoning and rental housing protection, such as using prioritizing affordable units on surplus land. "We need demolition agreements that say if you demolish, you must put in the same number of affordable units."

On immigration, the mayor said with 56,000 people coming into the region every year, those eligible to even come to Canada have to bring money to invest or be highly trained and high skilled. She mentioned how Mississauga has brought in almost 500 companies, creating 11,000 jobs.

The answers from all the candidates were pretty much along the same line of thinking. Chapman said he would encourage businesses to hire more young people, but that's the extent of what he could do. Mayor Crombie brought up how the city encouraged UTM and Sheridan to build courses and training around jobs needed in Mississauga. Rizvi said there should be more manufacturing companies and job fairs.

How to Tackle the Increase in Crime

"Mississauga is one of the safest cities in Canada, and we will continue to be. We had a slight increase in crime, so we asked the (community safety) minister to give the police the resources they need. We had a summit last Friday with (Peel Police Chief) Jennifer Evans and others to talk about the root causes of crime and how to feel safer again in our neighbourhoods," Crombie said.

Lee said, "safety from crime can't come from police alone; we should involve everyone. All crime has a cause, and preventing crime is more important. We don't want a police state, but we need cooperation with the police force."

Chapman said, "I've noticed gun violence increasing in Meadowvale, where I live. I want to give police the tools they need in order have enough officers to do their job," but said he didn’t believe in bringing back street checks, saying he wanted to ban it because it was unconstitutional. (An earlier version of this article said Chapman believed in bringing back street checks; we regret the error).

"It's a border issue, and we need to work across borders. This is gun specific: if someone buys a gun, it should be shared across nation states," said Pouragheli, saying she would propose this to Prime Minister Justin Trudeau.

In response to a question about accessibility to the mayor's office for residents of the city, Chapman said he wanted to establish a direct line to the office, to which Crombie replied by giving out her phone number, as well as plugging 311 and explaining the procedure by which her office responds on an issues.

"Sometimes it takes time to go back to staff on the relevant issue, follow up on the specific issue," she said.

Lee said city clerks are doing "an excellent job" and Pouragheli said the mayor should be more in touch with councillors and have a direct hotline to get an answer between 24 to 48 hours.

Other Ideas from Candidates

Overall, this wasn't so much a debate as more of a forum for candidates to discuss Mississauga's various issues going forward. But as this was the first time that some of the various mayoral candidates were in the same room together, it may be one of the few opportunities for voters to see them in a "debate" format.

This election campaign has been rather lacklustre since there were very few opportunities such as this, and it was up to individual candidates to be able to get their message out via more traditional means such as canvassing neighbourhoods, phone calls and literature drops.

Meanwhile, voters had to adopt a more insular approach. If you were asked to picture how a voter made their decision, I would imagine someone in front of a computer surfing candidates' websites, with all their flyers, brochures and other literature in front of them. It would have been more helpful if there was more interaction between not only mayoral candidates, but those running for council and school trustees as well.

Here’s what’s replacing a Smoke’s Poutinerie location in Mississauga
When Smoke's Poutinerie closed the doors of its Port Credit location for good earlier on in the pandemic, many residents likely wondered what would replace the restaurant.
END_OF_DOCUMENT_TOKEN_TO_BE_REPLACED