Mayor Bonnie Crombie says in no uncertain terms that she wants to finish the fight for Mississauga’s political independence that her iconic predecessor started.

In an Instagram interview yesterday (Oct. 5) with insauga.com publisher Khaled Iwamura, Crombie said there’s new motivation in the City of Mississauga’s ongoing push to convince the Ontario government to let the City cut political ties with the Region of Peel and forge ahead on its own.

“It’s always on my agenda,” Crombie said of the battle for political independence, noting it’s at or near the top of her to-do list as mayor of Ontario’s third-largest city and Canada’s seventh-largest urban area.

“I think people better understand how being a single-tier city is so important, particularly now that the Premier (of Ontario) is talking about strong mayor powers. How would that work in a two-tier system?”

The resolution was sent to the Province, MPPs and municipal associations to which Mississauga belongs.

Essentially, Mississauga’s argument is that the municipality, and not specifically the mayor, should be given a larger role in key issues. “…in particular now that (Ford is) looking at strong mayors. He’s now given a strong mayor system to Toronto and Ottawa…and he’s said he will extend that to everyone,” the mayor said.

“How will that work in a two-tier system? I don’t know. These are questions that need to be answered. So, that is always near and dear to my heart. I would like to get this done.

“Hazel (McCallion) started this fight; I would love to have her see me complete it.”

Prior to retiring in 2014 after 36 years as mayor of Mississauga, McCallion spent many of those years pushing the provincial governments of the day for political independence.

In her wide-ranging interview with insauga.com, Crombie also pointed to another key incentive to cut ties with the Region of Peel.

“Let’s think back to the pandemic, when the COVID rates were so high in the city north of us, yet we were shut down and our case counts were not that high,” she began. “And I was watching on the Mississauga-Oakville border the customers from our restaurants and our businesses crossing the street to go to open businesses on the Halton side in Oakville, (whereas) we were shuttered. And I think that plainly speaks to the fact that if we had our own public health unit, we could’ve been open at the time if we were a single-tier city.

“There are many, many advantages (to splitting from Peel) including controlling our own destiny, reducing costs, which could easily speak to reducing our taxes…there are so many advantages. There is duplication at every level, having two layers of government. We’re Ontario’s third-largest city–Toronto, Ottawa, Mississauga–we deserve to be single-tier much in the way that Hamilton, London, Windsor are. We are not, and we should be.”

Mississauga’s mayor also pointed to the issue of the City paying more than its fair share into Region of Peel coffers.

“We transfer a lot of money to the Region of Peel…we provide over 60 per cent of the funding, and we only have 50 per cent of the vote. We transfer a lot of money for policing, policing used in Brampton for their needs because the formula is assessment-based and of course we have the higher assessment, so we end up transferring more money towards policing than we use as a city.

“So, there are many reasons why (leaving Peel) makes a lot of sense. It is very important to me, but at the same time…it is at the political will of the Premier to do so.” 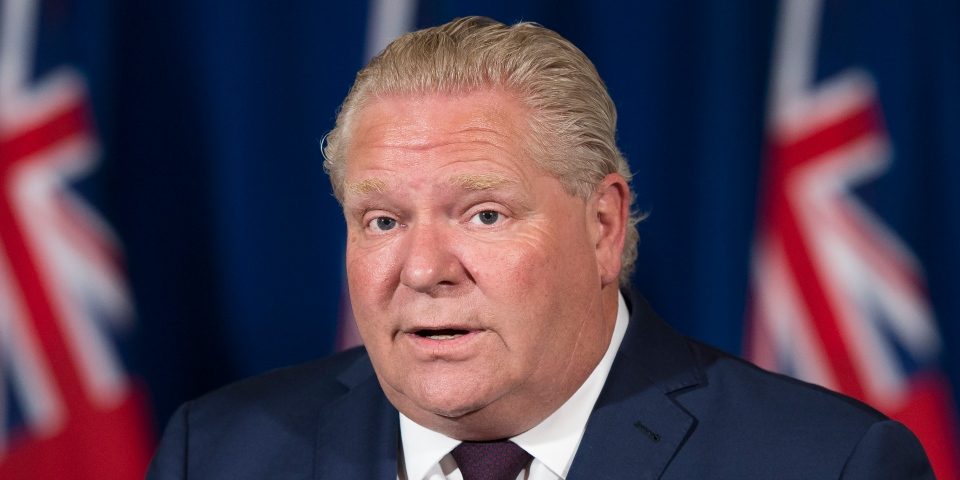 In an interview earlier this year with insauga.com, Premier Ford suggested he’s willing to listen to Mississauga municipal politicians who want their city to break away from Peel Region partners Brampton and Caledon.

“I look forward to sitting down with all of Peel and discuss those issues, sit down with Mayor Crombie and see where the benefits lie, because it affects everyone,” said Ford. “It affects Caledon, it’ll affect Brampton and Mississauga. But I’m always open to the ideas that they bring forward.”

The idea to separate from Peel is a long-standing one for Mississauga, with the plan originating nearly three decades ago during McCallion’s tenure as mayor.

In more recent years, Crombie has grabbed the torch, pressing Ontario’s Premier to allow such a separation of regional government to take place.