Mississauga mayor says she “does not want to see Halloween cancelled,” asks people to avoid in-person gatherings with anyone they don’t live with 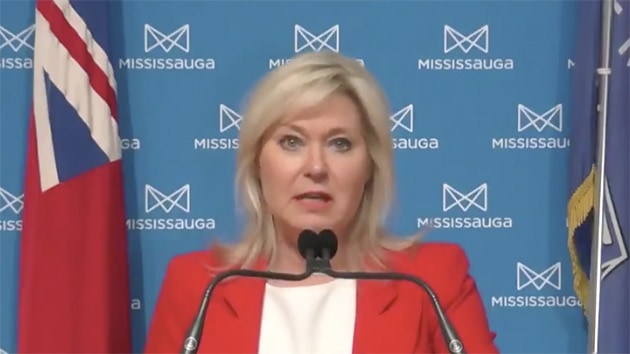 At an Oct. 14 press conference, Mississauga Mayor Bonnie Crombie pleaded with residents to cancel or postpone in-person gatherings with anyone outside their household in the wake of rising COVID-19 cases in the Region of Peel.

Saying that she hopes the smaller Thanksgiving celebrations of this past weekend will mean residents will be able to celebrate Diwali, Christmas, Hanukkah and Kwanzaa with more loved ones in the coming weeks, Crombie asked that people shrink their social bubbles as much as possible.

“Last week, I asked you to shrink your bubble to just the essential people in your lives and this week, I’m asking you to go one step further by eliminating all non-essential contact, which will drive down your risk and help us avoid a longer lockdown,” Crombie said, adding that people should adopt a “social lockdown” of sorts

“That means no more dinner parties, no coffee with friends and no unnecessary trips to the mall. I know how important it is to stay connected with friends and family, but please take it online.”

Emphasizing that cases are stable (though high, with about 50 new cases being reported in Mississauga on a daily basis) and reassuring residents that local hospitals are not overwhelmed, Crombie said that the situation “could change at any moment.”

As far as trick-or-treating goes, Crombie said that she “does not want to see Halloween cancelled”–a statement that came a day after the mayors and chairs of GTHA regions and cities called on the provincial government to release “one clear public health message” on how families can celebrate the Oct. 31 holiday safely.

The letter from the GTHA mayors and chairs was released on the same day that Canada’s chief public health officer, Dr. Theresa Tam, said that trick-or-treating is safe if proper precautions are taken.

“I would like to see [Halloween] going forward this year with some precautions put in place. This is one of the most exciting times of the year for our kids and I know that their little hearts would be broken if we couldn’t find a way to make it work safely,” Crombie said.

“[Peel Medical Officer of Health] Dr. Lawrence Loh is striking an internal Halloween task force that will coordinate with other HTA health units to develop a set of recommendations to help keep our trick-or-treaters safe. It is my hope that these recommendations will inform the province on a single unified public message.”

The mayor said that taking restrictions seriously now can help reduce new cases before the end of the month.

“It is up to us to take lockdown seriously and push case numbers down as we approach Halloween.”

At the press conference, Crombie also announced that she has asked the province to consider expanding newly-implemented restrictions on indoor dining, gyms and theatres to other GTHA regions in a bid to discourage Toronto and Peel residents from simply leaving their cities to eat or workout.

Her comments came after both she and Dr. Loh said they understood that the province was clamping down on bars, restaurants, banquet halls and gyms in Mississauga in order to prevent Toronto residents and visitors from converging upon Peel establishments.

Peel was rolled back to a modified Stage 2 last Friday, just one day after Crombie and Loh said that most new cases in the region are linked to private social gatherings and workplace and household spread.

As of now, restrictions on indoor exercise and dining will be in place in Mississauga until at least Nov. 7, with no guarantee that Peel will return to Stage 3 after the 28-day period is up.

“The reality is that closing businesses in one jurisdiction has the potential to cause a spillover effect in neighbouring regions. If businesses are closed in Toronto and not in Peel, residents may travel here to visit our bars, restaurants or gyms and cause our numbers to spike. The same could be said across the GTHA, which is why I asked the Premier [Doug Ford] to extend these restrictions to other regions that border Peel and Toronto.”

Acknowledging that many businesses are extremely distressed by the rollback, Crombie said she’ll do “everything in her power” to support impacted organizations.

“Last week my conversations with the Prime Minister [Justin Trudeau], I stressed the need for funding to support bars, restaurants and banquet halls. Shortly thereafter, the federal government acted to introduce a range of supports from rent relief to wage subsidies and loans that will help small businesses retain jobs and stay afloat during this difficult time,” Crombie said, adding that the province has also pledged to offer financial help.