Mississauga Mayor says bars and restaurants do not need to be closed in Mississauga, asks people to celebrate Thanksgiving with household members only 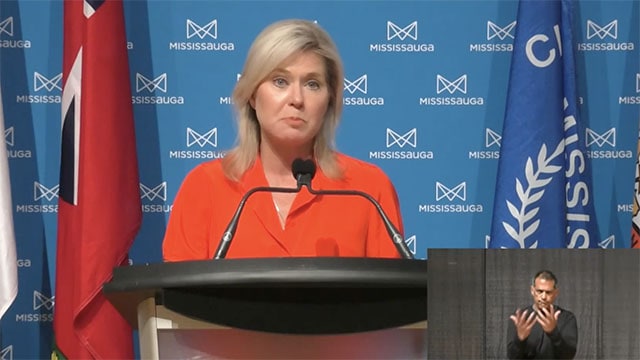 At an Oct. 8 press conference, Mississauga Mayor Bonnie Crombie said that most new cases of COVID-19 in Mississauga (and the Region of Peel overall) are linked to workplaces, banquet hall events such as weddings, and private social gatherings and not bars, restaurants, gyms or retail outlets.

Crombie’s insistence that Peel-area bars, restaurants, gyms and retailers do not require further restrictions comes at a time when Dr. Eileen de Villa, Toronto’s Medical Officer of Health, is asking the province to temporarily ban indoor dining and implement other restrictions on some businesses in Toronto.

At the press conference, Crombie and Dr. Lawrence Loh, Peel’s Medical Officer of Health, said that Peel’s situation does not yet mirror Toronto’s, even though both areas are reporting consistently high numbers of new daily cases.

While Toronto Public Health recently announced that about 18 (44 per cent) of 45 community outbreaks recorded between Sept. 20 and 26 were linked to restaurants, bars and entertainment venues, Peel Public Health says the picture is different in a region made up of multi-generational detached homes and more outbreak-prone workplaces such as factories, manufacturing plants and warehouses.

“I cannot stress this enough. At this time we are not seeing transmission in bars, lounges, restaurants or gyms here in Peel,” Crombie said.

“While there have been some cases linked to workplaces for the most part they have not been public-facing businesses and for that very reason I have stressed with the premier that I don’t think that any further restrictions or business closures are warranted or needed here in Mississauga at this time.”

While Loh affirmed Crombie’s comments and said that Peel Public Health is still able to successfully contact-trace new cases (something Toronto Public Health has said it’s unable to do as robustly), he asked residents to limit or cancel/postpone non-essential travel within and outside of Peel, saying that the situation in Peel “could change at any time.”

“Peel continues to see high, consistent levels of transmission and while it’s mostly in known chains, that could change at any moment,” he said.

“We’re seeing spread in large workplaces such as factories, manufacturing plants and warehouses. We see significant household transmission and one major driver has been social gatherings.”

Loh said that while the situation in Peel is not the same as the one unfolding in Mississauga’s eastern neighbour, he urged residents to follow de Villa’s advice to avoid any non-essential travel to Toronto. He also advised Peel residents to restrict travel in general and leave home only for work, school, exercise, essential appointments (such as medical or vehicle-related ones) or to purchase food, gas or other essential goods.

As for Thanksgiving, both Crombie and Loh urged residents to celebrate only with the people they already live with.

“If we don’t do the right thing right here and right now, we’re all putting Diwali, Christmas, Hanukkah and Kwanzaa on the line,” Crombie said.

“The best way to stay safe and be thankful this year is by keeping gatherings to your immediate household members and your essential supports. If you insist that your extended family must be involved, we ask you to please consider celebrating virtually or take it outside. I can’t emphasize this enough, the best way to keep your family and friends safe this year is to stick to your immediate household.”

When asked whether or not the region or the city will be recommending against trick-or-treating on Halloween (or even moving to ban it altogether), Crombie said that official advice will be made available soon and Loh said that the province might also issue its own rules or guidance in the not-too-distant future.