Mississauga mayor calls for ban on outdoor activities to be lifted, says firefighters will help with vaccine rollout 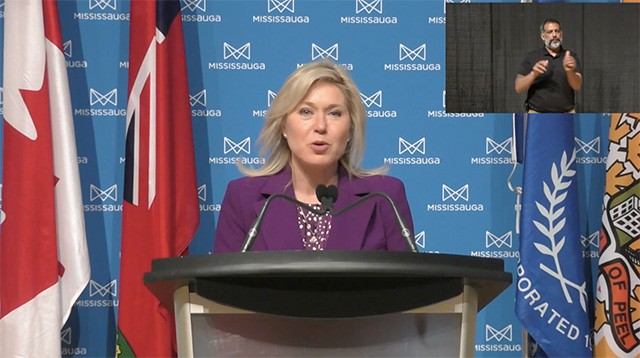 Mississauga Mayor Bonnie Crombie is calling for the province to further relax restrictions on relatively safe outdoor activities such as golf, echoing advice from health officials to make it easier for people to get and stay outside as much as possible.

Crombie also announced that firefighters are being trained to help vaccinate residents, adding that staff members at the city’s mass vaccination clinics might be needed in hospitals as the third wave increases pressure on the health care system.

Crombie said that Trillium Health Partners, which operates the city’s two hospitals, is transferring patients and dealing with a full ICU.

According to Crombie, THP is transferring out up to 10 patients per day to hospitals in southwestern and southeastern Ontario and treating 138 COVID-19 patients, including 29 people in the ICU.

“Right now we know that our hospitals are overwhelmed and staff at the mass vaccination clinics may soon be recalled to help with critical care at the hospitals,” Crombie told reporters at an April 21 press conference.

“If that happens, our firefighters will be ready to step up and keep getting vaccines in arms.”

“Firefighters put out fires. They attend motor vehicle collisions, they help with medical emergencies and we’re so proud to be able to say we’re going to be helping put vaccines in people’s arms,” Rizzi said at the press conference.

“…Obviously we’ve been talking for quite a while in terms of how can firefighters get involved in the fight against COVID-19 and we’re certainly very pleased that this partnership has come about and we look forward to the training that we’re taking next week and getting on the front lines and helping.”

At the press conference, Crombie called on the province to reverse its controversial decision to close outdoor activities and amenities such as golf courses and tennis courts.

Crombie also thanked the province for reversing its decision to close playgrounds and give police sweeping powers to stop people and vehicles and ask residents where they are going and why.

After the province made the announcement, police services–including Peel police, Toronto police, Halton police and Hamilton police–took to social media to say that they would not be conducting random stops.

“I also believe that the risk of transmission from outdoor activities is extremely low and I was disappointed that playgrounds and other outdoor recreational activities and amenities were closed. The science table did not support these actions either,” Crombie said.

“I received so many emails from residents on how frustrated, disappointed and frankly, angry they were at some of these measures. I was very relieved and thankful that the premier and the solicitor general listened to Ontarians and walked back the policy on enhanced police powers.”

Crombie said that although she’s happy that playgrounds are open, she wants to see limits on outdoor activities lifted further.