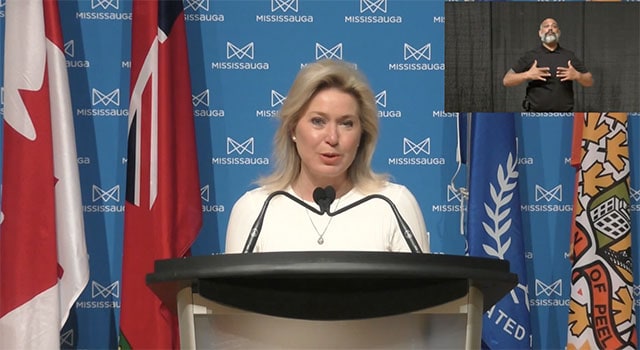 At an April 29 press conference, Mississauga Mayor Bonnie Crombie urged the province to allow Dr. Lawrence Loh, Peel’s Medical Officer of Health, to lower the age threshold for vaccination at his discretion.

Crombie told reporters that if the Region of Peel receives more vaccines and the discretion to administer them as public health sees fit, every eligible adult who wants a vaccine could have at least one shot by the end of June.

“What will allow us to get the vaccine out quickly to all residents 18 and older is a steady supply and the ability for Peel Public Health to make the decision themselves when to lower the age categories,” Crombie said at the press conference.

“I’m confident that if both of these things happen, we could have our entire adult population vaccinated with at least one dose by sometime in June.”

According to Ontario’s Ministry of Health, all Ontarians who are 18 and older are expected to be eligible to book at least their first dose (should they receive a Pfizer, Moderna or AstraZeneca jab) by the week of May 24.

This does not mean that all eligible adults will be vaccinated, but rather that they will have an opportunity to book an appointment at a participating clinic, pharmacy or other operation.

The province also said that during the weeks of May 3 and May 10, 50 per cent of vaccine allocations will be allocated to hot spots targeting mobile teams, pop-up clinics, mass immunization clinics, hospitals, primary care and pharmacies. 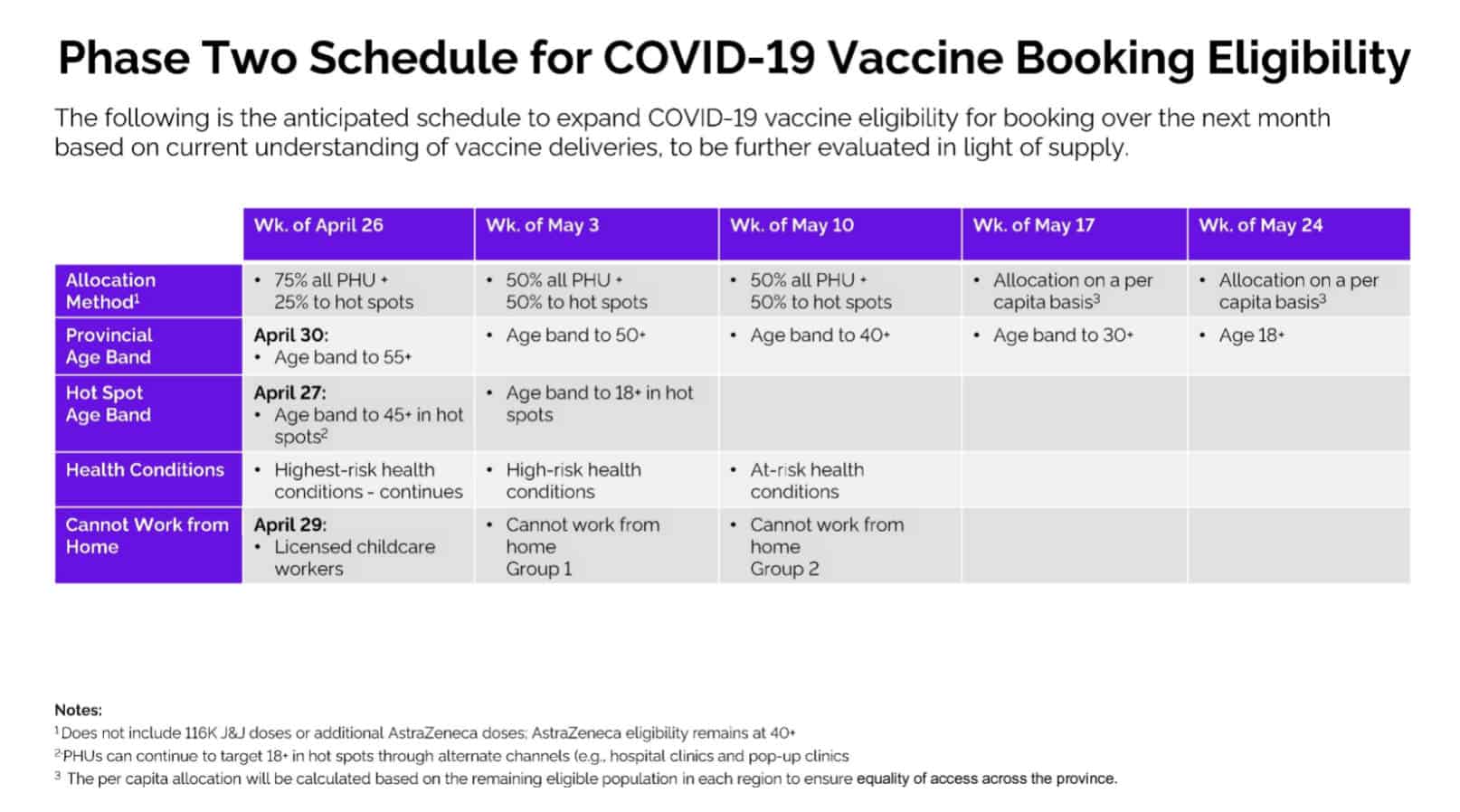 At the press conference, Crombie addressed concerns about Peel residents not being able to access as many pop-up clinics as their Toronto counterparts.

“We are following the province’s direction and using pop-ups to target high-risk settings as supply allows but let’s be honest, we have one hospital network [in Mississauga]–Trillium Health Partners. These pop-ups will target largely our vulnerable residents and those who are least likely to register at one of our mass vaccination centres. Dr. Loh and the team at Peel Public Health will continue to roll out pop-up clinics in the coming weeks.”

“But like I said, the quickest and most effective way to get our entire adult population vaccinated is through the built-in capacity we already have at our mass vaccination centres,” Crombie said.

As of now, Peel Region is on the provincial booking system that currently allows residents who are 60 years of age or older to book vaccines. The region is also vaccinating people 45 years of age and older who live in “hot spots.” Residents who are 40 and older can book AstraZeneca shots at participating pharmacies.

At the press conference, Crombie also asked the province to designate the entire Peel Region as a hot spot (as of now, some postal codes on Mississauga’s south-end are excluded from Ontario’s hot spot classification).

“I’m urging the province to make all of Peel a hot spot zone, which would mean including just a few more postal codes in Mississauga and one other in Caledon. Peel is a very unique region with more warehouses, factories, distribution centres, food processing, and packaging plants than anywhere else. In the GTA, we’re home to an incredibly large population of essential workers who have gone into very crowded workplaces day in and day out to provide us all with the products that we rely on and that we need to survive,” Crombie said.

“So by making all of Peel a hot spot, we would be able to start offering the vaccine right now to everyone 45 years of age and older. The reality is that we have the capacity and the supply to do this.”