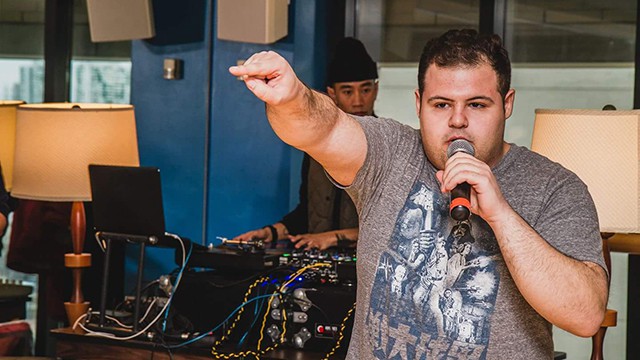 For so many people, extreme bullying–especially when paired with mental health issues–can be ruinous.

It chips away at someone’s already fragile self-esteem, furthering their isolation and alienation from their peers. And while much is being done to raise awareness of and discourage the ongoing torment of victims (often for the “crime” of being shy or awkward or troubled or different), some former victims turn the corner when they throw themselves into art, music, or fitness.

In the case of 26-year-old Mississauga strongman (more on that later!) Josh Busuttil, turning to all three helped him turn things around.

Beyond giving inspirational talks to big businesses, he also gives back to the community by volunteering for Nexus Youth Services, a Region of Peel-based organization that works with young people to create a safe, relaxing and respectful environment that celebrates youth culture in all its diversity.

Busuttil knows what it’s like to struggle with being different.

“In my teenage years, I was diagnosed with severe Tourette Syndrome and OCD (Obsessive Compulsive Disorder),” Busuttil says.

Tourette Syndrome is a neurological disorder characterized by motor and vocal tics. These tics include eye twitching, arm jerking and head bobbing. Vocal tics are common, and often include shouting inappropriate obscenities.

OCD is an anxiety disorder characterized by negative, unwanted thoughts that cause extreme distress and sometimes prompt to sufferer to act out through repeated actions or rituals (such as handwashing or counting steps).

“In 2005, I was diagnosed with both conditions while entering my first year of high school. As a result, I endured insurmountable bullying, which triggered the onset of early stage depression,” he says.

“I started getting bullied really bad in high school and people called me names. I was a bit heavier too, and I started getting ticks in grade 9. I was bullied in school, and other places as well. Throughout my high school years, the tics and anxiety really got the best of me. I felt worthless and ashamed. In addition to these trials, I lost two friends in a span of a year, which took a huge toll on my mental health.”

The extreme bullying prompted Busuttil to switch schools, and he eventually started counselling.

“There’s a little bit more awareness [of mental health issues now], but there needs to be a lot more done.”

But while Busuttil sought and received treatment for his mental health challenges, he says that the power of family, music, and fitness helped him turn his life around.

“My family was always been the light in the dark for me,” he says. “They always told me I’m bigger and stronger than my struggles. Those words have helped me become my toughest. I owe that much to them.”

“I’m a big fan of rock and heavy metal music. The music has influenced me to write about my struggles. Now I write to uplift others suffering like I once did.”

“I go to a lot of local shows. A lot of my friends are in bands. I go to the Living Arts Centre, Celebration Square, bars, etc. I go to a lot open mics, too.”

When it comes to fitness, family encouragement–and a great local gym–helped Busuttil focus on yet another passion.

“The day I was introduced to a barbell, everything changed. I felt adrenaline going through my veins. I was bitten by the iron bug and I quickly became infected,” he says.

For Busuttil, finding the right gym was key.

“I walked into a Mississauga gym in 2017 called Habitual fitness. Right from the start I really liked the place. It’s my home away from home. I met the team and they’re all great people.”

“Habitual Fitness sponsored me for the contest. The contest was super heavy, and I placed six out of 10. I’m happy since it was my first competition. I’m now going to be competing in powerlifting moving forward.”

“it was different, but it was a good experience. Family and friends have been so supportive, my dad was so excited, my mom, my whole family.”

“I’ve been a public speaker for the United Way since 2014. My story has been heard by many different companies, such as Pepsi, General Mills, RBC and BMO. It’s helped me to be featured on Rogers Television and become a nominee for The United Way Speakers Bureau award in 2017.”

Never one to sit still for too long, Busuttil is also the author of two eBooks titled ”The Battle” and “Rebel”.

The Battle is a collection of 25 poems.

“All of the poems are self-interpreted by the readers. “The Battle’’ was inspired by my personal life experiences and my worldview. I hope my work will influence others to be more than the darkness that surrounds us. We all have an identity and it takes something powerful to bring out the best in ourselves. Everyone has it in them to create themselves and my intentions for everyone is to be at their best,” he says.

As for his other work, Busuttil says Rebel will be an eight volume series totaling up to 64 poems.

“It depicts the mind of a free thinker. The concept behind the book is a man who questions everything while trying to find purpose and truth. My intention is for the readers to not believe everything they’re told. It’s to decipher the truth from the lies in order to reach their potential.”

So, what advice does Busuttil have for people who are struggling to carve out a niche for themselves?

“Knowing yourself and helping others find their voice is what it is  all about at the end of day. Be tough, Be strong. Be yourself in a world that tries to criticize you. Be yourself and stand your ground. If you’re being bullied, talk to someone you can trust,” he says.

“A lot of people have told me I made their day, or shined a light during a dark time.”

As for what the future holds, Busuttil says he’ll keep doing what he’s doing.

“Fitness is catharsis, same with writing. It boosts your serotonin, it boosts your endorphins. I see myself writing more books and helping people be the best they can be. I’m hoping to help others know themselves.”