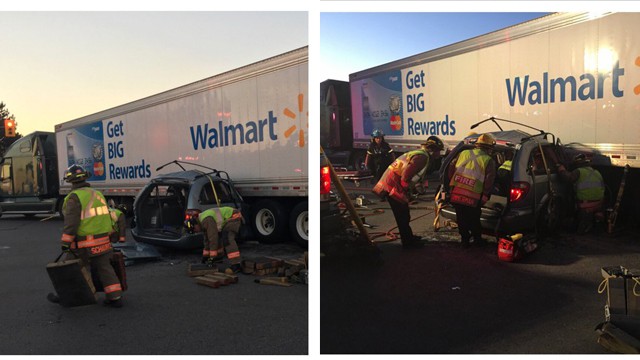 Well, it looks like some good news has come out of a harrowing situation. A 23-year-old Mississauga man who was involved in a serious collision this morning is reportedly in stable condition.

Early this morning, Peel police tweeted that paramedics and fire crews were on scene dealing with a horrific crash in the Syntex Drive and West Credit Avenue area. The crash, which involved a Walmart transport truck and a minivan, prompted emergency crews to close Derry Rd. W.

As you can see from the photos, the crash was severe, resulting in the minivan being partially crushed underneath the truck.

The victim was airlifted to a Toronto-area trauma centre.

Derry Rd. W. will remain closed for the remainder of the morning, so please avoid the area.

#PRPMVC the Major Collision Bureau has taken over the investigation of this accident pic.twitter.com/ZfhMN9C5Ea