Mississauga Man Charged After Police Pursuit Near Square One 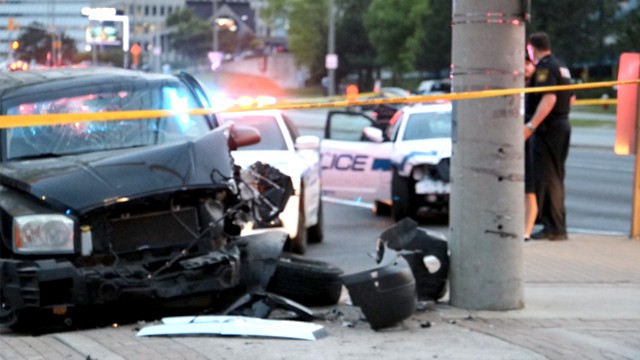 Police have identified and charged a suspect regarding Wednesday night’s police pursuit, according to CTV News.

Daniel Rahimi, a 23-year-old Mississauga resident, is believed to have been driving the black pickup truck that was speeding down Burnhamthorpe Rd and away from police before eventually hitting a street light.

Rahimi is being charged with flight from police, impaired driving, excess BAC (blood alcohol content) and escape from lawful custody.

He appeared in court on Thursday morning for a bail hearing.

More details about the chase have come to light thanks to a CTV viewer named Miroslaw Gaweda, who used his phone to film the incident from his balcony.

Gaweda said he was in his condo watching a basketball game with friends when he heard sirens from outside.

In the video he took, the black truck is seen driving erratically with several police cars in hot pursuit. A police cruiser and civilian vehicle are struck during the chase.

When the fleeing vehicle hits a pole just before reaching the intersection, the driver (presumed to be Rahimi) gets out and tries to escape, but is surrounded by Peel region police officers.

He is taken into custody along with a second person, believed to be a passenger in the truck.

According to police, the chase started when they noticed the vehicle driving erratically and not stopping when they turned on their sirens.

Click here to see similar footage of the chase.