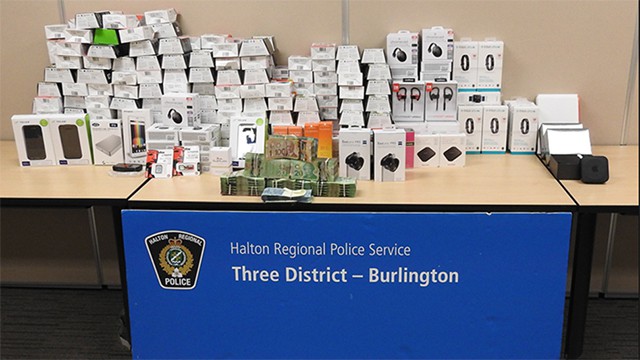 A Mississauga man has been arrested following the discovery of a large amount of stolen property and cash.

Halton police report that on March 19, two men visited the Apple Store at Mapleview Mall in Burlington and stole $6,219 worth of Apple TV’s, wireless headphones and USB storage devices.

On May 1, investigators arrested 50-year-old Mississauga man Ardian Sadik Piri and executed a search warrant at this Stapleford Terrace home.

Piri was released on bail and will appear in court on May 24.

Police are still looking to identify the second suspect involved.  He is described as a white male, 40 to 50 years of age with dark hair. He was last seen wearing sunglasses, a blue jacket, dark jeans and a checkered shirt.

Anyone with information about this theft or who can identify the second suspect is asked to contact D/Cst. Dave Macedo of the Burlington Criminal Investigations Bureau at 905-825-4747 ext. 2368. Tips can also be submitted to Crime Stoppers “See something, Hear something, Say something” at 1-800-222-8477 (TIPS), through the web at www.haltoncrimestoppers.ca, or by texting “Tip201” with your message to 274637 (crimes).