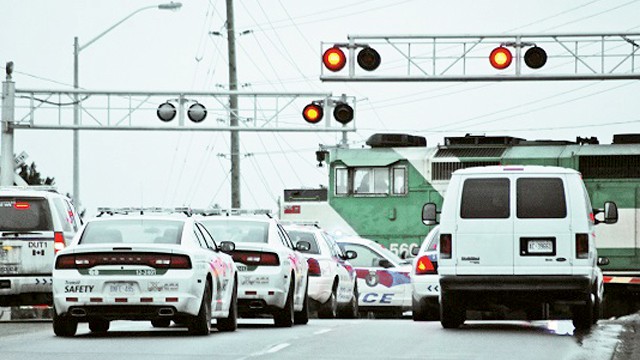 With Rail Safety Week coming up next Monday, it’s important to remember you can never be too careful on the road — especially where trains are involved.

Transport Canada and CBC released a list last Wednesday that shows 500 of Canada’s highest risk railway crossings, according to an article from the Mississauga News. Included in the list are seven locations from Mississauga and two from Brampton.

The 2014 list, which represents three per cent of the country’s 17,000+ public railway crossings, was made using web-based software that is able to calculate the possibility of an accident/collision. The software uses several indicators to determine the level of risk: Volume of road and railway traffic, maximum train and vehicle speeds, number of tracks and lanes, etc.

“It’s important to understand the distinction between ‘risk’ and ‘danger.’ Risk factors do not necessarily mean a crossing is unsafe,” said Daniel Savoie, spokesperson for Transport Canada, in a statement to The News. “It means that when you compare two different crossings against these risk factors you may deem one crossing to be higher risk than the other.”

Savoie told The News that one of Transport Canada’s main roles is to monitor railway companies and verify that they meet safety requirements under the Grade Crossings Regulations.

“It should be noted that this list is from 2014 and was a snapshot of crossings at that time,” Savoie said, as reported by The News. “This list is now outdated due to improvements made to some of these crossings and more recent data. We are constantly updating information we collect to ensure that improvements are made.”

Below are the Mississauga and Brampton locations that appear in the list:

The article also mentions some interesting facts that drive home how important it is to be careful around trains. Did you know an average freight train weighs over 12 million pounds? A car, on the other hand, only weights around 3,000 pounds. A train hitting a car is comparable to a car hitting a soda can. Yikes!

Regardless of what you’re doing on the road, make sure to stay safe, and train yourself to always pay attention!