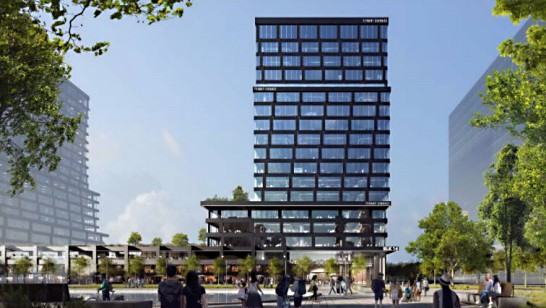 The City of Mississauga is moving to give financial incentives for a developer to build an office tower in the City Centre amongst all the condos and apartment buildings.

The office tower – which if built will be the first in downtown Mississauga in 30 years – would be 19 storeys and provide much needed office space and jobs for the area which has largely been filled with residential buildings despite official plans to do otherwise.

To be built by Oxford Properties, the tower would be built on the north side of Rathburn Rd. across from Square One in the area that formerly housed Sport Chek.

The plan is for the City to provide an equivalent of approximately $3.95 million over 10 years. The Region of Peel is also expected to supply grant money. The funds will come with a number of conditions and much of it is expected to be recouped in tax revenue.

A report presented to City councillors indicated that residential properties are more financially advantageous for property owners to build. As such, the incentives are needed to attract commercial developers.

The report also suggests that Oxford’s proposal is likely to kick-start other developers to build downtown office space.

The move comes as the City falls behind its plan to create job opportunities for residents who move into the City Centre.

By 2051, an additional 33,000 employees and 5 million square-feet of office space will be required based on population forecasts.

If all approvals are given, Oxford could begin their project in 2025 and take four years to complete.