Mississauga Libraries Struggling to Get Some Popular eBooks

Technology has been a game changer and disrupter in an overwhelming number of industries, and while some institutions have struggled to keep pace, libraries have actually managed to navigate changing visitor demands with aplomb.

But while the Mississauga Library System has adapted—in fact, the Central Library alone (which is slated to undergo a $42 million renovation) offers 3D printing, a newcomers centre for new Canadians, a career centre and the Open Window Hub for residents struggling with homelessness—there's one area where local libraries are struggling: obtaining popular eBooks.

"Libraries work together to ensure that they are providing access to content that people want and that the formats are aligned with their needs in terms of accessibility, ease of use and availability," says Jennifer Stirling, manager, digital library services and collections.

"We've changed the format to ensure our content is available 24/7 in the form people want, and we've seen demand for e-books and audiobooks and we're working to try to share access for libraries. This is a struggle because it's a new platform and it's changed the publishing world."

Because e-books are relatively new terrain for publishers, libraries are having difficulty purchasing (at affordable prices, in many cases) titles and keeping them in stock.

The Mississauga Library says it supports the fair eBook and eAudiobook pricing for all public libraries in Canada because while the demand for both eBooks and eAudiobooks is skyrocketing, major publishers aren't making a number of best-selling titles available to Canadian public libraries—including some prominent Canadian and Indigenous works.

"The models are complicated and expensive," says Stirling. "We can pay four or five times the cost that someone would pay for an eBook and have to repurchase after a certain amount of time, such as two years or 26 circulations." 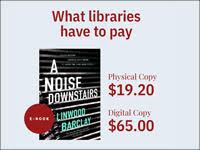 "It's challenging to build a sustainable collection for our customers. From an audiobook perspective, it's especially hard. For example, we can't purchase some books in eAudio format, such as Common Ground, Justin Trudeau's memoir."

As for why this is happening, Stirling says one reason is that there are exclusive services that require customers to have subscriptions, so libraries are effectively blocked. When libraries do obtain eBooks or eAudio publications, they don't have as many copies to distribute as you might think (given the digital nature of the publication and all).

While libraries are often used by residents who want to study or take advantage of WiFi, they still remain places where books are paramount. For that reason, it's difficult for libraries to cater to user demands when they can only supply a limited amount of digital material.

"It's picking up and it's not stalling. In the retail model, e-books might be slowing down, but in library models, we're seeing demand grow. People see the value in it and you can circulate it anywhere. It's available to people who are commuting, watching TV, driving and more."

The eContent for libraries campaign runs a website that lists all of the eBooks Canadian libraries are unable to obtain, including Into the Water by Paula Hawkins, Born a Crime and Other Stories by Trevor Noah and Shelter in Place by Nora Roberts.

But while it's difficult for libraries to grapple with the issue, Stirling says they're hoping to work proactively with publishers to address it.

"Publishers aren't our enemy, but we want to show we're doing our due diligence as people who manage public funds to make this sustainable for readers going forward. The big five publishers control a lot of the market. We've worked more closely with Canadian publishers, but some rights are held by the 'big 5,' so we can't get access to Canadian content. We can never get some titles to our customers if exclusive deals persist."

The library also has to pay exorbitant amounts for popular titles, including Hillary Rodham Clinton's What Happened? book ($104 for one copy).

Stirling says that it's likely difficult for publishers to find a sustainable policy with digital titles.

"I think they're trying to find sustainability for themselves as well. There's a lot of fear about how electronic publishing will impact them and there's a fear that libraries will take away some of the profit. We've done some research to ensure we have information to ensure that we don't take away from publishers. Library users just to love to read and if they borrow it, they're more likely to buy it."

While it might seem unusual for people to purchase books they've previously borrowed, it's not—and a recent study suggests libraries can actually help authors and publishers gain more publicity and readership by promoting specific titles.

The data analyzed by the project shows that the selection and promotion of the title led to increased buzz and sales.

In fact, the numbers are pretty staggering.

According to the study, there were 5.6 million page views globally of the ebook title details page in public library digital catalogs. There was also an increase in the title's Amazon Kindle sales rank--from below 200,000 prior to the library ebook club campaign to 7,833 at the close of the event.

There were also over 13,000 Goodreads additions for the title during the campaign, over 400 comments on the OverDrive discussion board and over 500 mentions from libraries and readers on social media sites using #BigLibraryRead.

As for whether or not publishers are on board, Stirling says some progress has been made.

"We're in the middle of spreading the word. One publisher has said it's interested in having a discussion. We need to make people aware of the disparity. We have to manage our budget and highlight this and find a way," she says.

"Our libraries are funded by the city and the province and we're managers of the public purse. There's a limit on what libraries can spend and we do our best to ensure we're spending wisely. In other to ensure that we're relevant, we have to ensure we have the formats that readers need their books in."

"We know that we serve a wide variety of customers from cradle to grave. We have story time and literacy programs for every age. We do see that there's a continued growth in eBook readership among adults, and we see that continuing to grow.”

Stirling says libraries and publishers need to work together for the sake of readers.

"We need to work together to find something that works for everyone. We each have a role in promoting literacy."