Mississauga launching first transit project of its kind in Canada 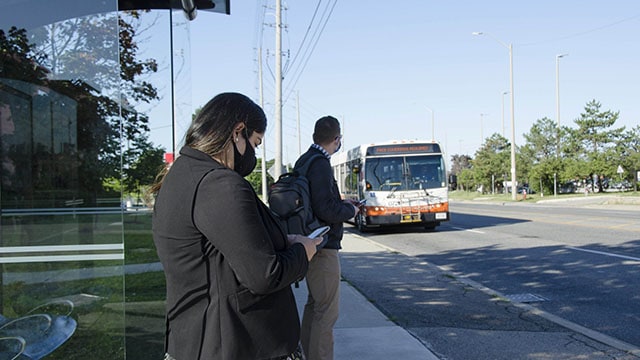 If you want Mississauga to do more to combat climate change, you might be happy to hear that it’s working to make its transit fleet greener.

Recently, the city announced that MiWay will participate in a hydrogen fuel-cell electric bus pilot project in 2021.

MiWay is partnering with the Canadian Urban Transit Research & Innovation Consortium (CUTRIC) on the pilot project – the only one of its kind in Canada. According to the city, fuel-cell buses use hydrogen fuel cells as their power source, which provides an environmentally friendly source of electricity.

The city says that hydrogen fuel-cell electric bus technology does not produce any harmful tailpipe emissions.

“The only by-product of this process is water vapor, making hydrogen fuel-cell electric bus technology zero-emission.”

The move comes about a year after the city committed to a multi-million dollar climate action plan.

“A major priority for Mississauga is fulfilling the actions outlined in our Climate Change Action Plan. Participating in this pilot project will advance our understanding of sustainable transportation, helping us make sound decisions for our fleet in the future,” said Mayor Bonnie Crombie in a statement.

“At the city, we’re committed to looking for innovative and low-emissions solutions to reach our goal of reducing greenhouse gas emissions in Mississauga by 40 per cent by 2030.”

The pilot project will happen in two phases. In the first phase, a feasibility study will be completed to understand four key components in applying the technology: Local hydrogen fuel supply and storage; vehicle design and implementation logistics; economic and financial viability; and greenhouse gas reduction opportunities.

In the second phase, MiWay will work with CUTRIC to secure funding for the project from higher levels of government. The city says that funding, if obtained, will allow the partnership to buy and operate 10 hydrogen fuel-cell electric buses.

“While many transit agencies in Canada are conducting small scale battery-electric bus trials, none of them currently involve hydrogen fuel-cell electric bus technology. This would make Mississauga the only city in Canada to undergo a pilot like this,” said Geoff Wright, Commissioner, Transportation and Works, in a statement.

“Hydrogen fuel-cell electric bus technology offers the same benefits as the battery-electric bus technology; however, they are lighter and quieter, have more fuel capacity and can also deliver the critical operational benefits a transit system needs to serve customers in a practical way, particularly on longer distance routes.”

The city’s Climate Change Action Plan identifies 21 key actions that the city should take over the next 10 years.

There are two goals set out in the plan, with the reduction of greenhouse gases (GHG) being the first. An interim target of 40 per cent below 1990 levels by 2030, followed by GHG reduction targets of 80 per cent by the year 2050, eventually reaching zero emissions. The second goal is developing increased resilience to withstand and respond to current and future climate events.

Last year, it was reported that the plan would cost more than $457.6 million in the coming decade between the years 2020 and 2029.