Mississauga Is Finally Planning to Modernize the Bus System 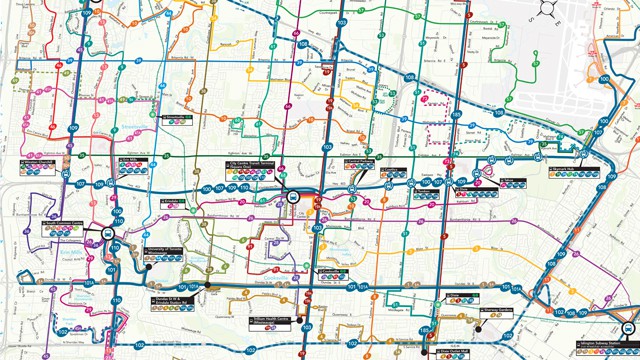 Let’s face it, Mississauga as a textbook suburban municipality was not designed with public transportation in mind. When Mississauga Transit, now branded as MiWay, was first implemented, it was done with all routes basically leading back to the central terminal, which was Square One.

I have heard Geoff Marinoff, the city’s Transit Director, describe the way Mississauga established its bus routes as “throwing a plate of spaghetti on a map of the city and putting transit routes wherever the strands spread out on.” And this is coming from the guy who runs MiWay!

So now they have a solution. The City of Mississauga has embarked on a plan to modernize the bus system starting this year until 2020, with the changes being rolled out incrementally. The changes are being phased in starting April this year, eliminating and modifying routes incrementally in order to minimize disruption.

The main takeaway point of the change is that Mississauga will be moving towards what is known as a ‘grid’ system for the bus service, but what does that mean exactly?

CityMetric, a transportation blog, supposes you’re designing an ideal public transit system for a fairly dense city where there are many activity centres, not just one big downtown area. In fact, you don’t want to give preferential treatment to any point in the city: instead, you want people to be able to travel from literally anywhere to anywhere by a reasonably direct path, at a high frequency. From my perspective, that describes Mississauga to a tee.

Mississauga’s MiWay (or Mississauga Transit as it was simply known back in the day) system originated from Square One, and all roads lead to Square One.

For decades it was the only transport hub in the city, so naturally all the bus transit routes just led back to and spread out from Square One. This was well suited for a suburban city where people were spread out all over and needed to reach Mississauga’s central core in order to connect to some other transit network to go to Toronto or elsewhere.

But Mississauga has changed; during a recent interview, Mayor Crombie said that her vision for transit was to make it easier for people to move around within Mississauga, not just go somewhere else from Mississauga and back again.

This is the current map of the MiWay system as it exists now. 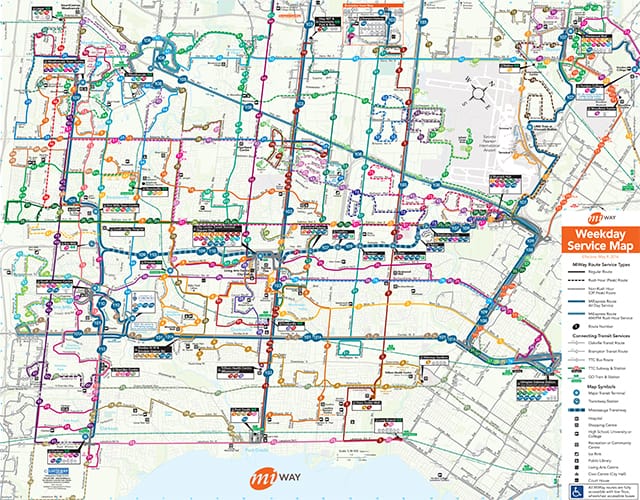 And this is what the city of Mississauga is planning to move to by 2020. 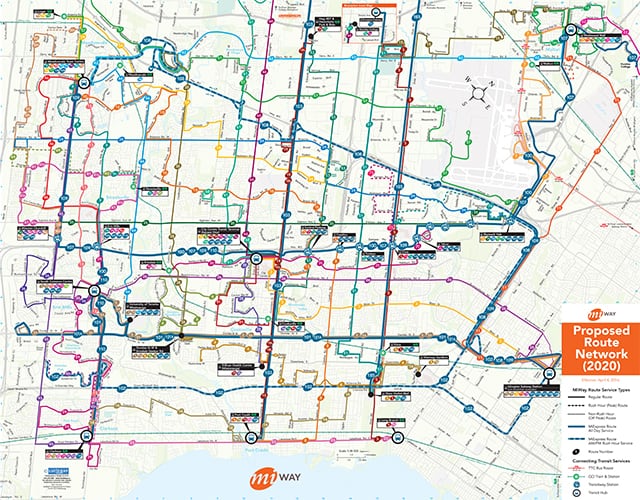 You can see when you compare the map for the current system and the one being proposed, there is increased service at the stations along the Mississauga Transitway, which by 2020 will be fully operational.

Some routes around the airport and other ones leading into other areas are being eliminated because frankly, there are not enough people riding them. Some of those routes near the airport were being subsidized by employers in the area for their employees, apparently due to lack of ridership.

At a town hall on the issue of transportation hosted by Dipika Damerla, the MPP for Mississauga East-Cooksville, some residents raised complaints about the elimination of some of the routes. One resident complained that one of the changes that was phased in on April 11, the No. 65 Barondale loop that is usually packed with seniors, is being cancelled and replaced by a revised No. 10 Bristol-Britannia route that now takes an hour from one end to the other. She was also complaining about how she would have to walk three km to work at Square One from her home near Rathburn/Central Parkway. I know the area she speaks of, and judging from my calculations, that’s not that bad a walk. I was also at this particular meeting and I recall this lady’s complaints; she did not look like walking was that difficult a task for her.

I think while, overall, residents and some councillors are upset that they are losing some bus routes in their neighbourhoods, they need to look beyond a narrow lens and see the bigger picture.

We have this Transitway that’s supposed to be a bus rapid transit line that goes east and west across Mississauga, but it’s pretty quiet on the track if you check it out — nary a bus comes by that’s filled with people.

That stems from the main transit hub still being City Centre; the other hubs from Erin Mills Parkway out to the eastern portion don’t have major bus routes going through them. These changes need to be made so we can actually make the Mississauga Transitway and other projects across the city viable options for residents. It’s important that people be able to travel easily within Mississauga — not just in or out of it.