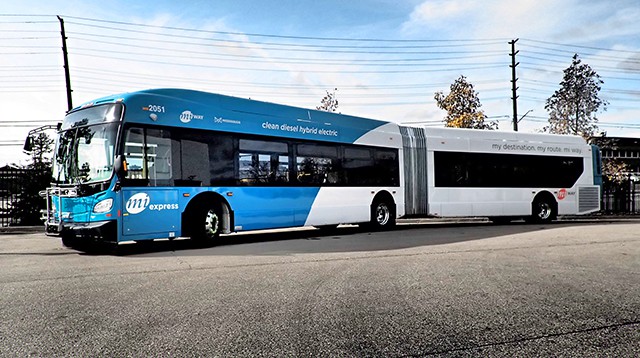 On Oct. 30, MiWay announced the introduction of 11 new, second-generation 60 foot hybrid-electric buses that are convertible to full battery power.

The city says the new buses will help reduce the environmental impacts of public transit and advance Mississauga’s commitment to including zero-emission buses in its fleet.

The city says these are the first buses of their kind in Ontario and the third in Canada.

“Climate change is here and we know it’s affecting Mississauga, so we have to continue to take action,” said Mayor Bonnie Crombie in a statement.

“Mississauga is working to become a climate-change leader, and greening our fleet is an important step in the evolution of our transit system, while reducing our carbon footprint. We know that this new fleet will help move us forward on this urgent City priority.”

In October 2019, MiWay received its first 10 second-generation buses, which were smaller in length (40 feet) and currently travel on MiWay’s local routes.

According to the city, the new 60 foot buses will be dedicated to MiWay’s express routes.

The new buses will have different design and onboard systems but will offer similar fuel savings and greenhouse gas (GHG) reductions as the 2019 buses.

The city says the buses feature start-stop engine technology that shuts down the engine while stopped at bus stops and automatically restarts when the brake is released, a reduced number of drive belts (from four to one) that reduce the potential of breakdowns and electrically-powered subsystems such as power steering, HVAC, passenger door operation and air brake compressor.

The city also says the buses boast three additional external cameras that provide external rear-views along both sides and rear of the bus and an all-electric “Smart Rider” accessible wheelchair ramp that’s capable of lateral kneeling and self-levelling to adjustable heights.

The new buses are expected to be ready for on-street service in early 2021.