As house prices continue to climb in Mississauga and other Greater Toronto Area cities (not to mention Toronto itself), some residents are deciding to sell their homes and take their substantial profits to cities where their dollars will stretch further.

In other cases, people who grew up in Mississauga are deciding that housing is simply not affordable and are moving further to enter the real estate market at a more manageable price point.

If you’ve ever considered leaving Mississauga and parking your dough in homes in Hamilton, Barrie or Guleph, you’re not alone--but you might not save as much as you hope to. 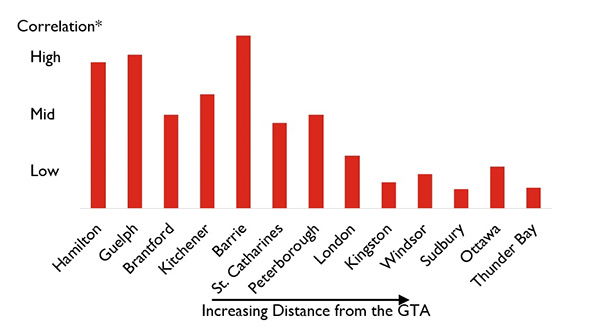 The CMHC notes that while most Ontario markets have witnessed substantial home price increases in the last two decades due to what it calls “favourable economic conditions”, the organization is starting to detect “moderate or elevated evidence of overvaluation in Hamilton and the GTA, suggesting that price appreciation in those centers is partly driven by other factors.”

In terms of Mississauga, home prices are indeed on the rise.

There are a few things fueling the price uptick in Mississauga's real estate market. The city is close to Toronto and, like other GTA cities, is suffering from a lack of robust inventory. In layman’s terms, the demand for houses is continuously outpacing supply and prices are climbing as a result. Some might also argue that persistently low interest rates are attracting more buyers to real estate, even though the government has moved to tighten rules surrounding borrowing.

“Our evidence supports that increasing single-family home prices in the GTA are persuading buyers to make purchases in nearby communities like Hamilton, Barrie and Guelph where homes are more affordable than within the city,” says Jean-Sebastien Michel, Principal, Market Analysis Centre, Canada Mortgage and Housing Corporation. “In turn, this is driving up house prices in these neighbouring markets.” 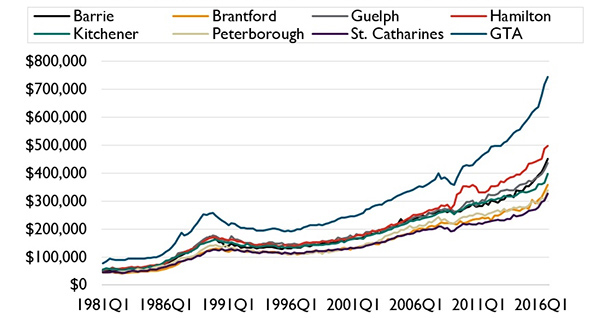 According to CMHC, GTA house prices (particularly low-rise/detached house prices) have increased disproportionately compared to other cities. This dramatic uptick has prompted many residents to purchase more affordable homes in those other cities, effectively driving up prices in areas that were once even more affordable.

While price spillover has been common in Hamilton, Barrie and Guelph, elevated home prices are now being observed in cities as far as St. Catharines.

While the CMHC is only making predictions, it speculates that a 10 per cent rise in GTA prices in a given quarter could translate to a 14 per cent rise in Hamilton home prices within a year. Fortunately, the report predicts that any impact would moderate over time.

So, what do you think, Mississauga? Are you anxious to get out and park your cash in Barrie before that market overheats, or are you willing to make greater financial sacrifices to stay in your city?

Long-standing store in Square One in Mississauga closing down permanently
A Square One store often frequented by families over the years will officially be closing its doors this month.
END_OF_DOCUMENT_TOKEN_TO_BE_REPLACED