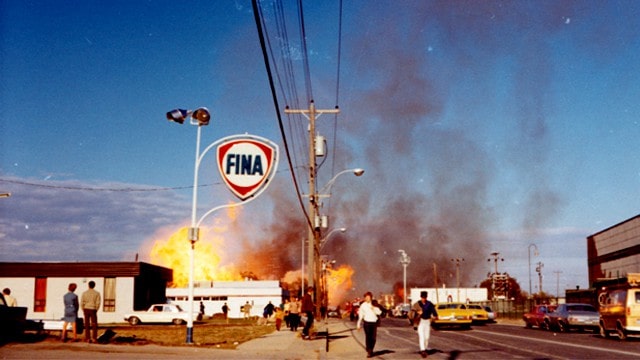 Between a massive explosion, making way for the Airport, and the need for bigger schools, many historic buildings in Malton have disappeared over past decades. Peel Art Gallery, Museum and Archives present just a sampling of those structures, and the roles that they played in the community.

Purchased to make way for the airport An array of farm houses were purchased by the Toronto Harbour Commission in 1937, to make way for Malton Airport, now known as Pearson International Airport. Among them was the Chapman house, first used as the airport’s administration building.

Aero Caterers Limited was next to use the building. They might not sound familiar, but chances are you’ve eaten their food.

In 1883, the Canadian Railway News Company incorporated to sell apples and newspapers on trains. They ran the first airport restaurant, The Tea Room at Dorval Airport in Montreal (est. 1941), and they took over the Chapman house in 1944, turning it into a flight kitchen to serve passenger planes leaving Malton Airport.

By 1976, what had become Cara Operations purchased a chain of steak and burger restaurants. In 1977, they made a more notable purchase: Swiss Chalet and Harveys. Their brands now include Milestones, Montana’s, and Kelsey’s. In recent years, they moved to Vaughan, but they still operate Pearson’s flight kitchen. As of 2010, the Globe and Mail reported that they provide meals to 60 airlines operating in Canada.

The site of the Chapman house is now vacant land, past the runways.

This is what’s there now: Despite the name, there’s no grim tales connected to the Death barn. The Death family’s name is pronounced “Deeth”, like “teeth”. The farm was located on a road which no longer exists, roughly around this part of the runway.

By the 1830s, there were a growing number of Catholic families in the eastern edge of Toronto Township (Mississauga). A segment of this lot was used as Elmbank Cemetery, its name referring to the lost community south of Malton, known as Elmbank. The graveyard remained on the site, with planes buzzing past, until they were carefully relocated to nearby Assumption Cemetery in 2000. Turns out the Catholic Irish cemetery was home to at least 622 individuals buried some time between 1833 and 1932, making it the largest historic cemetery in Ontario ever to be relocated. Located on North Alarton Street, this was Malton’s third school. The first building was opened in 1828, making Malton the fourth village in the area to have a school, after Dixie, Streetsville, and Clarkson. This new location could brag of modern amenities: a drinking fountain, flush toilets, a teacher’s lounge, and a furnace. This location lasted 1923-1952. Malton was a hub of aircraft building, beginning in the 1930s and intensifying during the Second World War. The Wartime Housing Commission built special housing for aircraft workers, and then constructed the Victory School in 1942, on Victoria Crescent, to house the many new students in the area. The school closed in 1964.

The building is now Malton Bible Chapel, below.

The next Malton Public School, which operated at Morning Star and Airport Roads from 1952 to 1981, also still stands.  With renovations, it’s now found new purpose as the Sri Guru Singh Sabha.

Why Malton doesn’t have a historic downtown Finally, there’s a reason that there are very few historic buildings in downtown Malton. On October 25, 1969, a gas main exploded in downtown Malton, killing one woman. The fire raged for hours, and destroyed the town’s business section. For more, visit [https://en.wikipedia.org/wiki/Malton,_Ontario#Gas_explosion Wikipedia’s article on Malton].