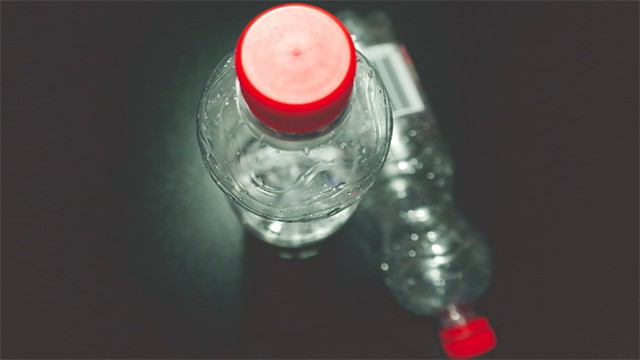 Planet or plastic … those three words grace the June 2018 cover of National Geographic magazine but one Mississauga gym owner has been asking that very question for years.

“We don’t think about the consequences of what we do,” said Richard Clark of Oakville.

He runs the Athlete Training Centre (ATC) in southwest Erin Mills and -for several years now- won’t let you use a plastic water bottle in his facility, no matter how much you plead.

There’s already too much plastic out there.

The epic illustration by Jorge Gamboa, depicting a plastic bag-iceberg hybrid was tweeted out by Nat Geo’s senior photo editor, Vaughn Wallace on May 16, launching the #planetorplastic movement.

Our latest @NatGeo cover is one for the ages#PlanetorPlastic pic.twitter.com/NssiHOtaYc

Nine million tonnes of plastic waste wind up in the ocean each year, according to a National Geographic article, and “it’s unclear how long it will take for that plastic to completely biodegrade into its constituent molecules. Estimates range from 450 years to never.”

The June issue of @NatGeoMag reports on the global plastic crisis, its effect on our health and environment, and
what we can do to stop it. https://t.co/54pvDegMZ1 #PlanetorPlastic pic.twitter.com/CRMM7glEVv

Six days before Wallace’s tweet went viral, Clark put up a sign at the entrance of his massive Ridgeway Dr. facility, accompanied by two images.

1. No shoes worn outside allowed in the gym.

3. No food or commercial drinks.

4. No coffee in disposable containers.

REDUCE PLASTIC & SAVE THE ENVIRONMENT.

It’s the first thing you’ll see when you enter.

Although straws aren’t explicitly listed, the rules apply to all disposable items, he said.

“Nobody should ever buy those,” said Clark.

Obnoxious, in your face, totalitarian?

But he doesn’t care how important you think you are — we’re all secondary to the planet. 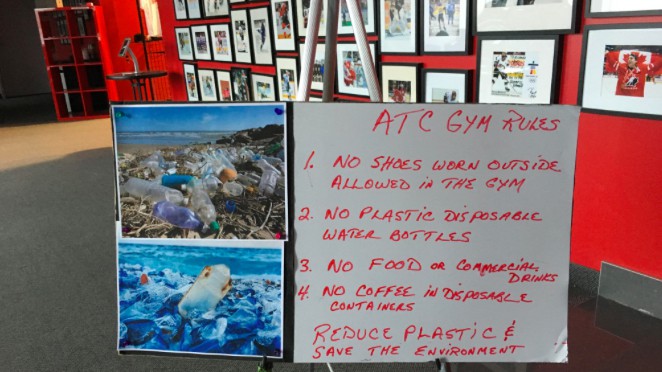 The gym is home to Olympians, off-season NHL players and prospects, OHL stars, CFL and rugby players, plus regular folks ranging from doctors to entrepreneurs.

A steady stream of athletes, young and old, arrive virtually every hour for a training session.

Parents, friends, significant others, etc. wait in the lobby and they’re often eating or drinking from disposable containers, which wind up in Clark’s trash cans and recycling bins.

(He actually goes through them by hand, just like Brenda’s mom in that classic Beverly Hills, 90210 episode).

If Clark uncovers contraband you might have to get down and give him 50 push-ups.

He may also make you take the items home.

“I used to buy those coffees all the time,” said Clark, until he found out the materials aren’t recyclable.

It all depends on where you’re at — coffee cups and lids are considered trash in Peel Region and the City of Toronto.

Halton Region, though, will accept paper cups in the green bin and lids  in the blue box. 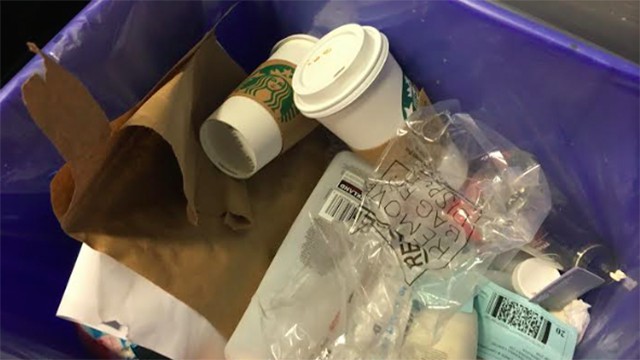 Regardless, they’re still banned at the ATC.

Ask why and Clark will start rattling off the latest statistics.

“Last year we had the floods,” Clark said, before emphasizing “radical changes in the climate.”

“I’ve got two grandsons now and I’m trying to leave an imprint,” he said.

Clark is also a vegan who says he’s changing lives via training and ‘plant-strong’ nutrition.

And Clark isn’t the only one talking trash these days.

Environmental concerns and single-use plastics are also on the radar of Prime Minister Justin Trudeau ahead of next month’s G7 summit.

British Prime Minister Theresa May has already announced her government is looking to ban plastic straws and other single-use items by 2042.

“We have made the protection of our oceans, specifically looking at plastics in the ocean, one of the key themes of our G7 presidency and I look forward to gathering with the other G7 leaders to discuss this issue and the various solutions that they have put forward,” said Trudeau at an April 19 press conference.

The G7 summit is taking place in Charlevoix, Que. from June 8 to June 9.

Do you think more businesses in Mississauga should ban disposable coffee cups, plastic and straws?