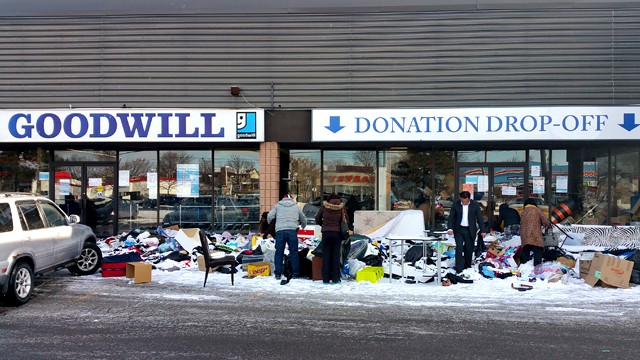 Goodwill shoppers and employees faced an unexpected blow when the long-standing charitable organization abruptly announced it would be closing 16 stores, 10 donation centers and two offices in southern Ontario this past weekend.

On January 17, Keiko Nakamura, the CEO of Goodwill Industries of Toronto, Eastern, Central and Northern Ontario, announced the closures in a press release.

“For more than 80 years, Goodwill Industries of Toronto, Eastern, Central and Northern Ontario has had a mission to enable work opportunities and provide skills development for people facing barriers to employment, including persons with disabilities, youth and the chronically unemployed. Goodwill stores and programs have supported many individuals and communities in this region.

Due to a number of factors affecting the retail environment, Goodwill is facing a cash flow crisis. As a result, 16 stores, 10 donation centres and 2 offices in Toronto, Mississauga, Brampton, Newmarket, Barrie, Orillia and Brockville are closed effective today.”

The closures — which will affect 450 unionized employees, some of whom have disabilities — appear to be due to, as the release says, a “cash flow crises.” We tried to phone Goodwill locations in Mississauga to find out if all the stores are indeed closed and all our calls went straight to voicemail.

This news came as a blow not only to the brand’s employees, but also to disabled people who benefit from Goodwill-run programs. The organization, which has been in operation for over 80 years, sells donated items and uses the proceeds to run charitable programs geared towards helping people with physical and intellectual disabilities.

According to a recent article in The Star, employees first learned of the closures when they arrived at their workplaces over the weekend. Union lawyer Denis Ellickson told The Star that the news came as a “complete shock.” Ellickson also told the paper that, under the collective agreement between the union and Goodwill, the company is supposed to give employees 30-60 days notice before shuttering stores.

According to The Star, the union learned on Sunday that the entire board of directors — minus Nakamura — had resigned on Friday. The Star article also points out that, according to the charity’s tax filings, Goodwill Industries of Toronto, Central and Northern Ontario reported revenues totaling over $28 million and expenses of $29, 218, 954 in 2014. The same filings also showed that the company received more than $4 million in government funding.

“It’s supposed be a charitable organization, but they are paid handsomely,” Ellickson told The Star. “Some of those people who are now terminated are vulnerable individuals with disabilities who have been hired through these government sponsored programs.” As of now, it looks like Mississauga residents will have to find another donation centre to give to. Shoppers looking for discounted wares will also have to look elsewhere. As to what will happen to local employees who suddenly found themselves unemployed this past weekend, we will keep you posted on any developing news.

You can still donate to Value Village and Habitat for Humanity.