Mississauga fourth most expensive city for rentals in Canada

If you were hoping to find an apartment and still have a little money left over for holiday spending, you might be disappointed (but not surprised) to hear that rental rates are inching back upwards in Mississauga.

According to the November National Rent Report from Rentals.ca and Bullpen Research & Consulting, which now includes year-over-year numbers, the average monthly rent for Canadian properties in October was $1,940 per month, an increase of 5.5 per cent annually.

While one-bedroom units are costly in Mississauga, units in Toronto, North Vancouver and Etobicoke are still less affordable.

Month-over-month, prices are up in Mississauga. In September, a one-bedroom rented for $1,907 and a two-bedroom cost tenants about $2,301.

Not unexpectedly, the report notes that Toronto’s average monthly rent edged up slightly to $2,320 in October, making it the priciest city for renters for a one-bedroom home. Vancouver had the highest rents for a two-bedroom at $2,949.

The report says that Canada is really "a tale of three markets," with high demand and tight conditions in Ontario and British Columbia, flat or falling rents in Alberta and Saskatchewan, and relatively stable conditions in the remainder of the country.

The average monthly price in Canada for rental apartments only was $1,574 per month in October, up 7.7 per cent from the same month last year ($1,461).

The report says the average monthly rent for Canadian properties in October was $1,940 per month, a decrease of 0.7 per cent monthly, but an increase of 5.5 per cent annually.

As for what's causing the crunch, low inventory and high demand are both creating issues for tenants who are struggling to find affordable units. In Mississauga, the rental vacancy rate sits around 0.8 per cent, which is below the healthy vacancy threshold of about three per cent.

The report says that Ontario's population is growing steadily, and housing supply has simply not kept pace. 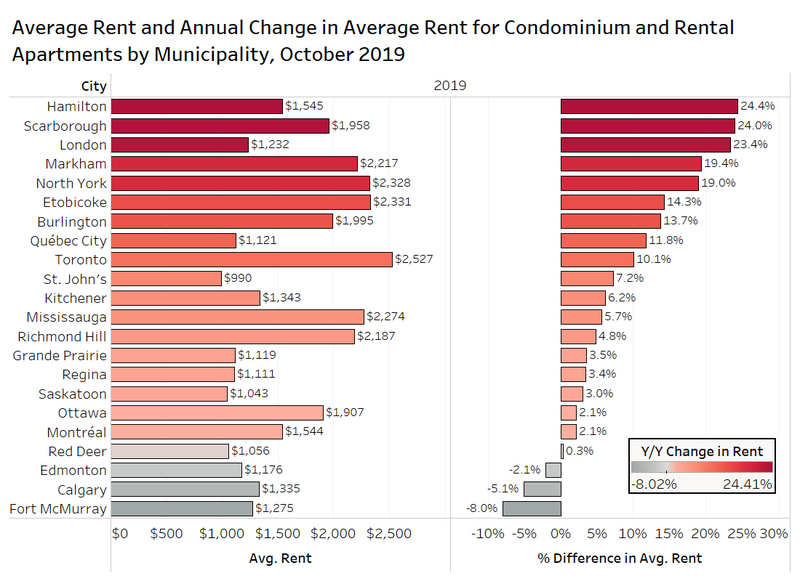 According to the report, there were 17,915 new apartments (rental and condominium) completed in Ontario through the first three quarters of 2019—the lowest level during the first nine months of the year since 2014.

The report says that other cities are watching rental prices grow, with Hamilton experiencing high rental market appreciation at 24 per cent annually, followed closely by Scarborough at 24 per cent and London at 23 per cent.

The four bottom markets are all in Alberta, with Red Deer seeing rents increase by 0.3 per cent. Annual declines of 2.1 per cent, 5.1 per cent and 8 per cent were experienced in Edmonton, Calgary and Fort McMurray, respectively.

“The national figures are propped up by hot markets in Ontario and BC, which are still suffering from a lack of new supply.”

“There has been a noticeable decline in the number of affordable properties for rent in Ontario over the past year,” said Matt Danison, CEO of Rentals.ca, “And areas that have typically provided less expensive rental accommodations such as Hamilton and Scarborough are experiencing the highest rent growth.”

The National Rent Report charts and analyzes national, provincial and municipal monthly, quarterly and annual rental rates and market trends across all listings on Rentals.ca for Canada.

Hugely popular dessert restaurant coming to Heartland Town Centre in Mississauga
While most people are hyper-focused on the coronavirus spread and the severe impact it's having on life around the world, there are actually a few things to look forward to (and that we should look
END_OF_DOCUMENT_TOKEN_TO_BE_REPLACED