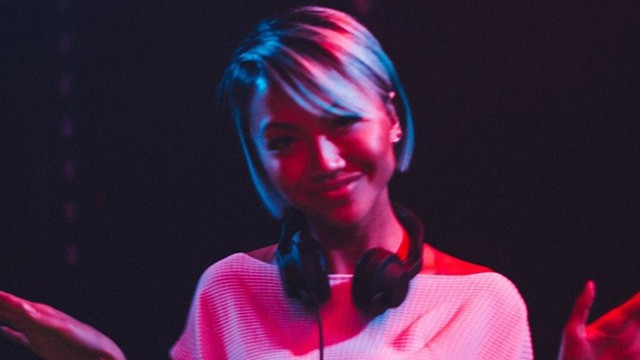 It’s no secret that the DJ world has never been more prestigious, so it’s incredibly exciting when a homegrown talent starts generating buzz–and it’s even more exciting when she brings her act to her hometown to celebrate one of the biggest nights of the year.

Iris Santo, a talented DJ and music producer, grew up in Mississauga and will be spinning at this year’s gigantic New Year’s Eve bash at Celebration Square.

Shockingly enough, it’ll actually be her first performance in her hometown.

“I’ve never played in Mississauga, so when [an event representative] reached out about Celebration Square for NYE, I said ‘finally, I’ve never played in Mississauga,’ says Santo. “I play electronic and house and not a lot of local clubs offer that genre. I’m not a top 40 DJ, so all my opportunities have been in downtown Toronto. It’s absolutely great to introduce my sound to people here and see how they respond to it. There are so many different genres of electronic music.”

Although this homecoming is happening slightly later in Santo’s career (she’s been DJing for about five years), it’s a big opportunity to share her music with a wide and diverse audience who, like she says, might not be terribly familiar with the genre she specializes in.

While it’ll be great for attendees to hear a local artist’s music (possibly for the first time), the performance might do more than that–it might just inspire people to do as Santo did and pursue a DJ career, even though doing so is incredibly challenging.

After all, Santo decided to pursue her musical dream after settling into a more conventional job in the financial industry.

“I wasn’t happy at my job. I used to work as a financial advisor at a bank and I’ve known ever since I was a kid I wanted to be a performer,” she says. “It wasn’t until I was 19 and started going out and clubbing and listening to house music, that I got interested. I kept waking up in regret and unhappiness knowing I wasn’t doing what I loved to do.”

While some people might dream silently and grudgingly return to their jobs day after day, Santo decided to give DJing and producing a shot. She went back to school to learn how to DJ and produce, attending Off Centre in Toronto to hone her DJ skills and enrolling in Music Box in Oakville to refine her production technique.

In the end, people were supportive–and the career shift enabled Santo to educate her parents on what, exactly, a modern DJ does.

“Overall, my close family and friends were supportive. Of course your parents will have their doubts and fears because they don’t understand the industry. I asked my parents if they knew what a DJ was, and they thought of radio DJs. When I was showing them pictures of night clubs I played at or festivals I travelled to, that’s when they got the idea of what it means to be a DJ in this day and age.”

Now, she DJs and produces full-time and operates a home studio, a fact that’s particularly impressive when you consider how challenging it is to make a living as an artist–especially one working in an extremely competitive industry.

“I can work and make money and support myself,” she says. “It’s not easy, it’s a cutthroat industry, but I was 100 per cent commission and I had to make it happen. I had to get my name out there. You have to prove to people that you’re worthy of their time. I’ve had people say no to me or tell me I’m not ready. I see it as ‘no for now.’ I never give up on fulfilling my goals.”

When people think of DJs–especially conventionally successful ones who get a lot of radio play–they often think of catchy mashups. While there’s certainly nothing wrong with assembling a punchy arrangement of catchy club anthems, Santo produces and writes her own music.

“I write my own music and start everything from scratch. I record everything on a keyboard I have at home and I’ll experiment with different sounds and melodies and record everything. A lot of times, I go in and whatever I feel inspired by, I lay it all out there and start recording. From there, I’ll start building the theme of the track and start arranging the music as a whole,” she says.

As far as performances go, Santo has experienced a range of events. She’s DJ’d at local-ish hotspots WildFlower, Muzik and CODA and even played the Ultra Music Festival in both Croatia and South Korea.

You can actually hear a track from her Ultra Korea set below:

While it’s clear Santo has made a name for herself, it’s only natural to wonder if it’s a little more challenging to carve out a niche in an industry that’s still, at this point, somewhat male dominated.

“I do see that there are a lot of up and coming female DJs,” she says. “It’s still a male-dominated industry, but I found that there are a lot more women now because it’s easier for everyone to get into DJing because you can get a laptop or special software. Everybody has something different to offer, which is great. There are no boundaries to what you can do or produce. I’ve never felt restrained or like I had to be an order-taker when I play at club. People trust my ability to do the job right.”

Speaking of equipment, Santo says that one of the worst–not to mention most embarrassing–things that can happen to a DJ is equipment failure.

“The most embarrassing thing that can happen is having your music cut out or your equipment fail. Once, I was DJing downtown and all of the sudden the music cut out. Everyone stares at you like ‘what just happened?’ The owner looks at you like, ‘what’s happening?'”

In that case, Santo says it’s best to have a backup plan (and never put all your eggs in one technological basket to begin with).

“I’ve learned to rely not so much on technology. With laptops, it runs too much risk when you play. Anything can happen. I use CD jays or turntables. I choose not to use the laptop because it’s too risky. I keep six USBs on me.”

So, what other advice does Santo have for other up and coming DJs?

“It’s good to hear constructive criticism. You have to listen to your audience and how they perceive you.”

Santo also says it’s important to practice, network and support other members of the DJ community.

“My advice would be to practice, practice, practice. I can’t stress that enough. When you’re ready to play live, don’t take a ‘no’ personally. Think of it as ‘no for now’ and try again. You have to keep trying to get your music heard,” she says. “You have to support other DJs. People need to know you to book you. You have to show face, network and shake hands with the right people. You have to meet people. People are more likely to hire someone they know.”

The Celebration Square festivities will kick off on Dec. 31 at 8:00 p.m. and guests who are interested in checking out Santo’s set can watch her spin during the insauga.com show with Khaled Iwamura and Jackie Perez.