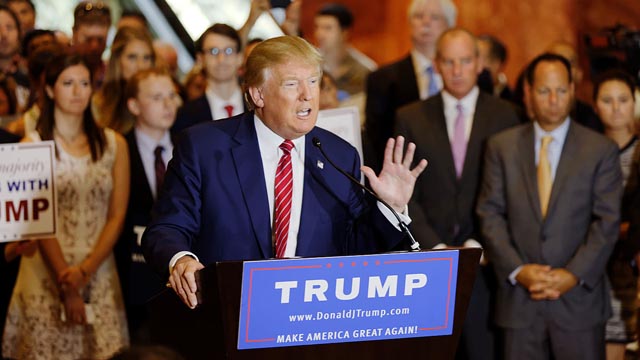 So, this is weird (but ultimately fitting, since election day is almost upon us).

According to a recent Globe and Mail article, Canadian courses for Trump University (yes, that university and yes, that Trump) were taught by a Mississauga couple who used aliases, declared bankruptcy more than once, lost a real-estate licence and were “sanctioned by securities regulators over a multimillion-dollar swindle.”

The findings came to light after an investigation by The Canadian Press and The Associated Press.

According to the article, the husband and wife team (who identified themselves as Dave Ravindra and Rita Bahadur) taught Trump courses in Canada in 2010 before Trump’s real estate seminars folded after a series of controversies.

The Globe reports that Trump assured customers that had handpicked the best and most qualified instructors, but many teachers were later found to have lacklustre credentials. The Associated Press reported that Trump University employed at least four convicted felons–including an army sergeant who was court-martialled for sexually assaulting an eight-year-old girl.

Now, it appears that the couple were actually Ravindra Dave, 59, and Chandramattie Dave, 55. The couple came to Canada from Guyana many years ago and have dealt with a series of financial troubles.

“The spouses have filed for personal bankruptcy at least four times since 2001 — twice by him, and twice by her, according to Industry Canada records,” The Globe reports. “Public documents list at least nine different names for the couple, mainly combinations mixing the order of their first, middle and last names.”

It appears the couple defrauded a number of Canadian investors to the tune of over $1 million between 2009 and 2012 and that the male party lost his real estate licence a full two years before he began lecturing for Trump University.

The Globe reports that the couple was hit with 29 penalties in the settlement agreement with Ontario Securities Commission. The couple must pay a $300,000 fine along with other costs. They also owe the parties they swindled $3.3 million and they must abide by restrictions on their trading activity.