If a Mississauga City Council has their way, sump pumps will be a thing of the past…at least when it comes to seeing them being sold door to door.

During the Wednesday, September 25 council meeting, council voted for a motion asking the provincial government to include sump pumps among the list of banned products under the Door to Door Sales Prohibition Act. 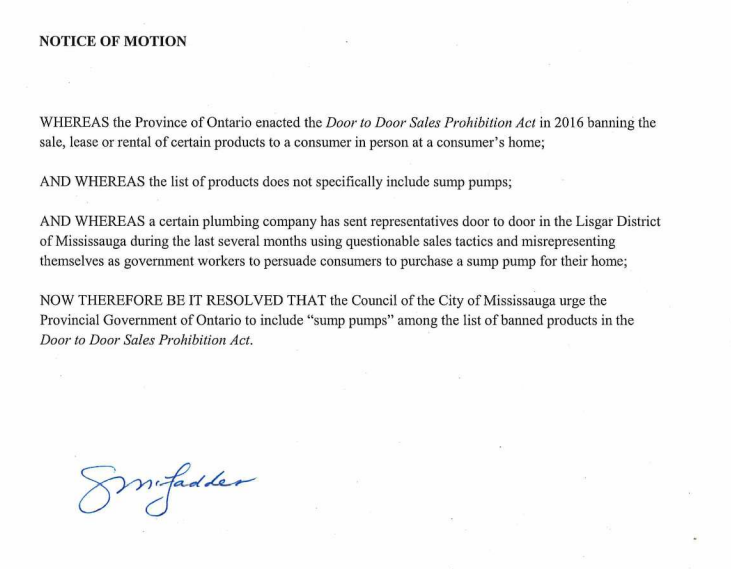 Ward 10 Councillor Sue McFadden introduced the motion, citing a number of complaints by residents of the aggressive door to door sales tactics.

“These tactics are intimidating and is souring a lot of confusion amongst residents. They are scared because they’re being told that their homes will 'go under' if they don’t get sump pumps installed,” McFadden said, adding that Lisgar residents that had no flooding issues at all were also being solicited.

Currently, the act bans items such as air conditioners, furnaces, water heaters, and other water treatment devices. Fines for selling them door to door range from $500 to $2,000 for an individual and between $5,000 to $25,000 for corporations.

According to the city, it also does not employ or authorize companies to install sump pumps on the city's behalf. Because door-to-door salespeople can sometimes use high-pressure tactics, recommendations are that residents exercise caution before providing any personal information to salespeople or committing to a service.

Those who are interested in sump pump work should note that city offers a sump pump subsidy program to assist homeowners that live on streets serviced by the municipal foundation drain collector (FDC) system to provide an additional safeguard against basement water infiltration.

While it is still a needed product that could come in handy should flooding happen in your basement, and with all the increased flooding lately, it is becoming a serious issue, people shouldn't have to be forced into buying a product that they don't want…unless sump pumps somehow become mandatory installations.

Do you think it's a good idea to ban the sale of sump pumps by door to door salespeople?