A Mississauga councillor who has been serving as the Chair of the Peel Police Services Board since January has been removed from that post only seven months into an expected two year term.

In a meeting of the board last week, the Peel Police Board announced that Norma Nicholson was elected the new chair, and another board member, Louise Mitchell, was elected Vice-Chair. 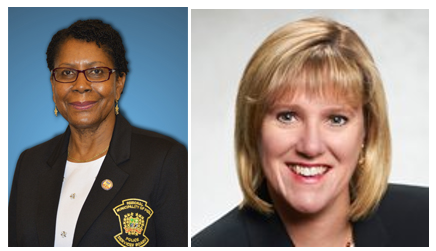 Nicholson, a registered nurse, is also an author, speaker and "youth expert", according to the PPSB website. Mitchell runs her own consulting practice, and has had involvement with the United Way of Peel, as well as serving as a past member of the Mississauga Board of Trade.

"I am thoroughly disappointed with the unilateral action taken by the Peel Police Services Board to purport to remove me as Chair of the Board at its hastily-called special meeting on Monday July 16. Linda Jeffrey, Mayor of Brampton and fellow PPSB member, requested that an in camera (closed session) meeting be called to discuss general issues related to confidentiality within the Board."

"As Chair, I agreed that such a meeting was important to have. However, the decision of the Board coming out of that meeting was to remove me as Chair and to appoint a new Chair. I was blind-sided. I did not step down or resign the position. I am seeking legal advice on whether the purported removal was illegal."

"While the Board gave no reason for replacing me as Chair, I believe this is a retaliatory measure following the Board's decision to file a complaint with the Integrity Commissioner that resulted in sanctions against Mississauga Coun. Carolyn Parrish for racist and sexist comments she made to me regarding a high-ranking police officer. I felt obliged to share those comments with the Board and the Chief and am now being punished for doing the right thing."

Parrish was indeed punished after McFadden shared text messages from embattled councillor that were sexist and racist in nature. The texts, shared after a community meeting regarding the closure of a police station in Malton, suggested that Peel Police Deputy Chief Ingrid Berkeley-Brown performed poorly at the meeting and that “being black and female” was all someone needed to be to be promoted.

Parrish, who has since apologized for the comments, is being docked five days pay and is required to attend sensitivity training, although that decision only passed in a 12 to 11 vote amongst regional councillors. Seven councillors voted not to reprimand her at all.

Robert Serpe, the Executive Director of the police board, said because this was an in camera meeting, he could not offer further comment other than the announcement of the appointments. But others on social media said the removal of McFadden was nothing short of hypocrisy:

Adrian Woolley, the president of the Peel Regional Police Association, slammed the move as a blow to accountability and transparency. 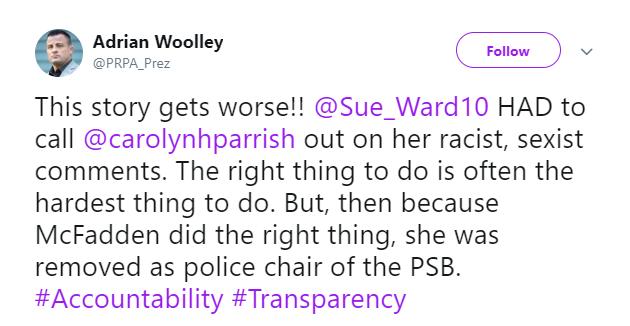 And an anti-racism group, the Black Community Action Network of Peel, said Parrish’s comments reflect a “deeper, perhaps even unconscious, bias about black people,” the group said in an open letter, as reported by CBC.

“We believe that the response from Councillor Parrish and several other councillors was highly disrespectful and disingenuous, failing to address the core issues of the incident, while minimizing and justifying a racist comment that is unbecoming of an elected official and indicative of systemic anti-black racism that subtly remains embedded within our public institutions."

It seems just when this story has been resolved (in a manner of speaking), another development emerges that breathes new life and legs into the controversy.