Mississauga councillors have voted in favour of a motion opposing the construction of the GTA West Highway (also known as Highway 413), a new 400-series highway and transit corridor that will run across the York, Peel and Halton regions.

Originally cancelled by the previous Liberal government, the PC government announced that the highway was back on the table in 2018. 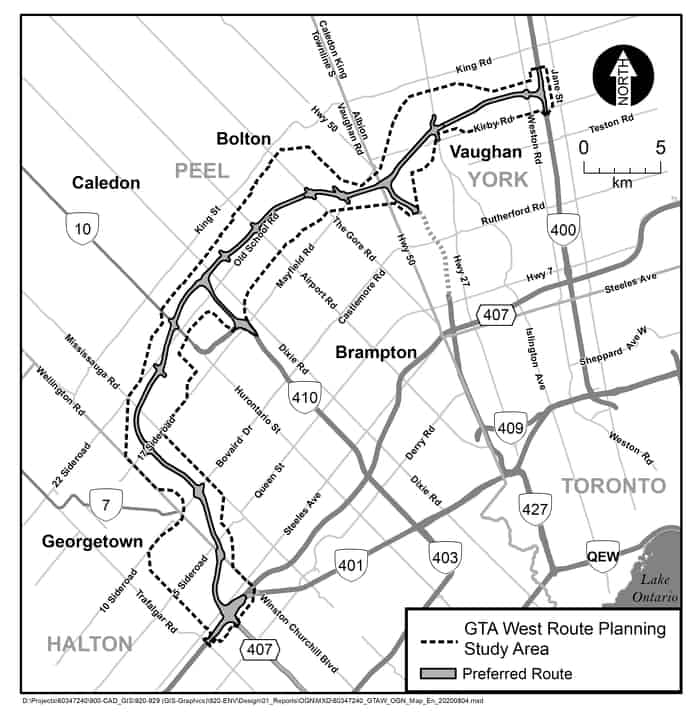 The corridor, which will extend from Highway 400 in the east to the Highway 401/407 ETR interchange area in the west and include a 400-series highway, transitway, and potential goods movement priority features, has received mixed reception from impacted municipalities, with some arguing it’ll encourage sprawl and do little to cut commuting times for drivers.

Mississauga Council unanimously voted to OPPOSE the GTA West Highway cutting through farmland, green belt and waterways. Joanie Mitchell would be proud. We are not “paving paradise to put up a parking lot”! Onward to Region of Peel tomorrow!

“Joanie Mitchell would be proud. We are not “paving paradise to put up a parking lot”! Onward to Region of Peel tomorrow!”

The motion, introduced by Parrish and seconded by Ward 8 Councillor Matt Mahoney, argues that “tens of thousands of jobs and billions in agriculture-related economic activity” will be at risk if the proposed construction of the GTA West Highway is approved.

In the motion, Parrish says that the highway will slash a 52 km swath through agricultural, natural heritage and environmentally sensitive lands, bisecting 85 streams, impacting seven wood lots (including a 5.95 km stretch of forest land) and disrupting 1,000 hectares of land significant to wildlife movement. The motion also says the highway will make “serious incursions into areas protected under the Green Belt Plan.”

The motion points out that a number of experts have spoken out against the project, including the David Suzuki Foundation, the Federation of Urban Neighbourhoods, Halton Environmental Network, National Farmers’ Union, Ontario, Rescue Lake Simcoe Coalition, Sustainable Vaughan, Transport Action Ontario, Sustainable Mississauga and others.

The motion also points out that the Toronto and Region Conservation Authority (TRCA) has also raised objections to the proposed highway and the streamlined Environmental Assessment process that began in 2018.

At the meeting, multiple councillors spoke out against the project, with Ward 2 Councillor Karen Ras calling it a “waste of taxpayer money.”

Parrish’s motion points out that the three-year environmental assessment undertaken by the previous provincial government was shelved because of objections to the highway by experts in the fields of rural development, renewable cities, agriculture and more who “predicted irreversible ecological harm caused by the uncontrolled, low-density urban sprawl the 413 would cause.”

The motion says that since the current lack of opposition to the highway by Peel Regional Council has been cited by the province as one of the main reasons to pursue the project, Mississauga–Peel’s biggest municipality–should voice its opposition strongly.

The motion will be shared with Brampton, Caledon and Peel Councils.