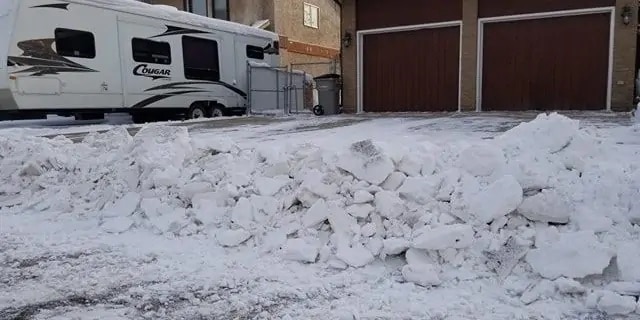 Mississauga is looking to expand one of its key snow-clearing services that many seniors and others have come to rely on during the city’s winters.

The City of Mississauga’s Driveway Windrow Snow Clearing Program clears enough snow from the windrow–a pile of snow left at the end of a residential driveway after street snowplows do their thing–for one car to get in and out.

The program is available on a first-come, first-served basis to residents aged 65 and older or people with physical disabilities.

This year’s program runs from Dec. 2 to next March 13 and the cost is $200 (non-refundable), or free for those who meet financial assistance criteria.

Deadline to apply for the program was Nov. 18, but City staff say they may still be able to accommodate a few more who missed applying by that date.

Following up on a council colleague’s inquiry as to whether Nov. 18 was a firm deadline to apply for this year’s program, Ward 4 Councillor John Kovac suggested the City expand the service.

“I would propose right here…that we increase that number (300) of those eligible for the program,” he said.

Ward 5 Councillor Carolyn Parrish voiced support for such an expansion, suggesting it be upped by as many as 200 people.

Geoff Wright, the City’s commissioner of transportation and works, said staff will look into the matter.

“What that means is potentially impacting the service level. If you go over by one or two (people), okay no problem, but if you start adding 50 extra spaces, that’s 50 extra locations where the current operational crew has to respond. So, that would mean that the service level would change, potentially, and impact the ability for us to respond,” said Wright.

“So, before we look at expanding that, I’d like to get a better understanding and provide that information to council around the capacity. What is that maximum number, truly? And what could it be expanded to without significantly impacting the service level?”

Wright added that a couple of years ago, at council’s direction, staff looked at the cost of clearing windrows for all residents, “and that cost was quite expensive and council decided not to pursue that option.”

Council then directed staff to go back and re-tender for windrow removal, to get a sense of a best deal, noted Wright.

“So, we’re in the process now and will report back to council in early 2023,” he said. “But I would caution that my initial feedback…with all the inflationary pressures that we’re seeing, is that the cost of a windrow removal program has only gone up significantly.”

Earlier this fall, when City officials announced the 2022/23 windrow program, they noted that they prioritize supporting residents during winter.

“We’re committed to providing support to residents in need as part of the City’s winter maintenance program,” said Helen Noehammer, Mississauga’s director of works, operations and maintenance. “Our staff work hard clearing major roads for emergency vehicles and bus routes. Then they move on to secondary roads. After these are completed, windrow clearing operations begin. Depending on the intensity of a storm, it can take up to 36 hours after snowfall stops for windrow removal to begin, so we appreciate the patience of program participants.”

For more information about the program, call 311.