If you get caught feeding wildlife in Mississauga, you could face a steep fine.

The program aims to minimize conflicts between coyotes and people and make encounters between pets and coyotes less frequent.

Should residents be found feeding wildlife (which can attract coyotes), they could face fines of up to $300 (previously, the fine was $100).

"Within the last year, reported coyote sightings have increased by more than 50 per cent in Mississauga," said Jay Smith, Manager, Mississauga Animal Services, in a statement.

"This is largely due to the launch of our coyote sightings interactive map. However, with increased sightings, changes to the Coyote Management Program are needed to address conflicts. This includes the widespread issue of wildlife feeding that leads to unwanted coyote activity." 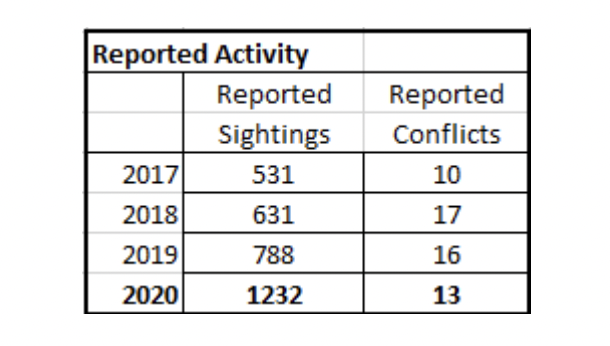 The report says reported conflicts with pets peaked in 2018 and declined by 24 per cent in 2020, with a 36 per cent reduction in conflicts involving domestic dogs.

The report says four of the 13 reported pet conflicts in 2020 involved outdoor cats.

According to the report, conflicts with pets tend to involve consistent factors, including unsupervised pets, residential properties that border natural areas and pets being walked off-leash or on long leashes.

The city says the program, if implemented, will work to minimize interactions by regulating feeding, responding to unwanted coyote activity and educating the community on how to live peacefully with the wild canines that are common in the area.

The city says its Animal Care and Control By-law has been revised to place more responsibility on residents who feed wildlife, adding that if there is enough evidence of feeding, officers will no longer need to observe residents feeding wildlife to issue a fine.

The exceptions are the responsible feeding of songbirds (such as using bird feeders in backyards) and operating a City-approved feral cat colony.

The City says that Animal Services has created a Coyote Conflict Classification and Response Table that outlines potential responses to coyote interactions. Responses can range from recording reported sightings, educating residents, site inspections or patrols, temporary closures of pathways or parks, trapping or removal and more.

Municipalities are not allowed to trap and relocate wildlife beyond 1 km.

The city says that anyone who encounters a coyote should refrain from feeding it, avoid turning away and running from it (as it might chase someone who is running) and do their best to look large and imposing by waving their arms and making startling noises.

Opening an umbrella, using a flashlight or sounding a phone alarm might also compel the coyote to run away.

Anyone who believes an attack is imminent should call 911.

To protect pets, residents should supervise their dogs while in yards, keep dogs on short leashes on walks and keep cats indoors at all times.

The recommendations in the report will go to council on May 5, 2021, for final approval.