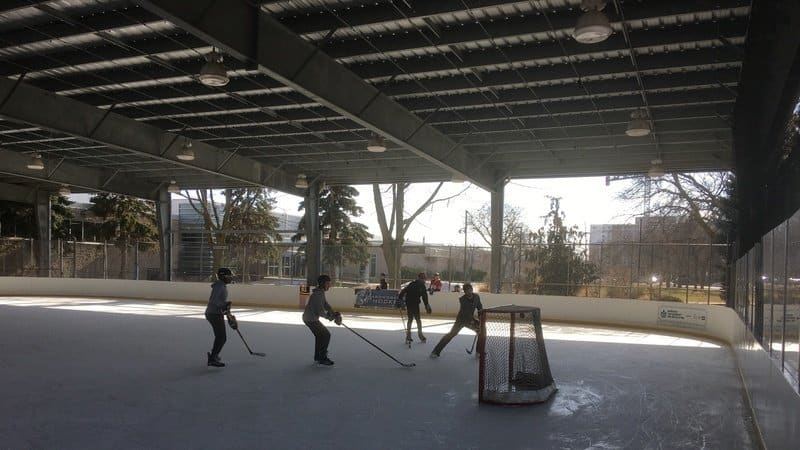 With COVID-19 forcing more residents to move their (small) social and athletic activities outside, some residents are concerned about the planned demolition of the covered, outdoor skating rink at the Burnhamthorpe Community Centre.

Fortunately for those demanding the rink be saved, another one could potentially take its place in Gulleden Park (or another area) in the future.

On Jan. 20, residents and residents’ association representatives appeared before Mississauga council to protest the upcoming removal of the ice rink, which is slated to close this spring due to the planned renovation of the community centre.

Prior to the meeting, Mississauga resident Joe Galati launched a change.org petition calling on Mayor Bonnie Crombie and members of council to cancel the planned conversion of the outdoor rink to an aquatics centre.

The existing community centre—located on Gulleden Drive, near Burnhamthorpe Road East and Dixie Road—is getting a new addition as well as a makeover in 2021. According to the city, the addition will feature a new state-of-the-art aquatic centre, as well as a club-format fitness centre. The city’s website says that due to site constraints and design requirements, the addition will be connected to the north side of the existing building, which includes the area on the northeast corner that is currently occupied by the outdoor rink.

On Jan. 20, Galati discussed his petition and said that the rink, which is located outside and should not be confused with the indoor Chic Murrary Arena that is not slated to close, is the only covered, outdoor hockey rink that’s free and therefore accessible for all residents.

“[Closing it] blocks out kids unless they’re from wealthy families. For our mental health over a long winter, this has given us an opportunity to embrace our cold climate,” he told council.

At the meeting, Sue Klein-Shanly, who appeared on behalf of the Mississauga Residents’ Associations Network (MIRANET) to advocate for the outdoor rink, said that the community wasn’t adequately consulted prior to the renovation being approved.

“How could a design for a new pool be approved before meaningful consultation? No one who spoke to us heard anything about this before 2020. Why was only one design approved? What’s the justification for removing the outdoor rink? The city needs to commit to a refrigerated, covered rink at another park. An outdoor pool is used less than three months a year,” Klein-Shanly told council members.

Ward 3 Councillor Chris Fonseca responded to concerns by saying that she originally asked that staff try to include the outdoor rink in redevelopment plans and that those involved in the project “did their homework in terms of working with various restraints and requests.”

Ward 5 Councillor Carolyn Parrish refuted claims that residents were not informed, stating that the public was consulted on the project.

At the meeting, Kristina Zietsma, director of recreation with the city, said that the rink is rarely at capacity. Zietsma told council that free programming use rates hovered around 30 per cent at the rink, which is only open four months of the year, pre-pandemic.

Zietsma, who said that communicating with residents has been a “challenge” because of the virus and associated lockdowns, told council that the design that removes the outdoor rink is the most feasible one.

“We looked at designs to keep outdoor rink but the design that made the most sense financially was the one that removed the outdoor rink,” Zietsma said, adding that the concerns about keeping the rink might be heightened because of the pandemic and its impact on indoor recreational activities.

“We are more than willing to do feasibility work to evaluate whether we can do one at Gulleden Park or another place that makes sense. We can do the work and bring it back to council. Times have changed and demand has grown,” she said, adding that with climate change, the season for natural rinks has been reduced.