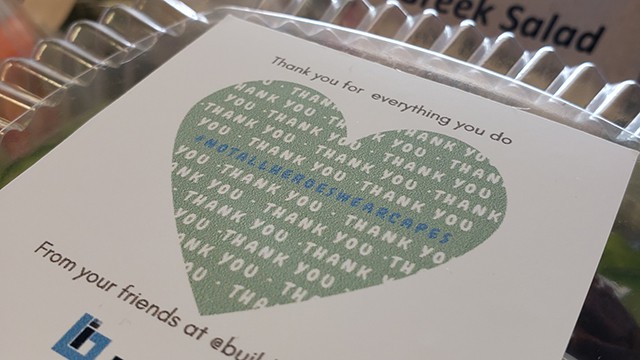 While the news surrounding the ongoing COVID-19 pandemic has been bleak, some people (and businesses) are stepping up and doing their best to help their communities cope with the crisis.

Build it by Design, a Mississauga-based construction company that’s brought such restaurants as Masrawy and Jollibee to life, is partnering with local restaurants to bring high-quality meals to GTA hospitals.

The campaign, which launched last week, will help support both local foodservice companies affected by COVID-19-related shutdowns and local health care workers who could use some gourmet meals.

“We will be partnering with some of the top restaurants in the city and placing large orders that will be directly sent out to frontline emergency workers across hospitals in the GTA,” a Build it by Design representative told insauga.com in an email.

Build it by Design says large orders have already been sent to such local hospitals as Trillium Health Partners–Mississauga Hospital and Mount Sinai.

Some of the restaurants involved in the campaign include Basil Box, Fidel Gastro’s, Masrway Kitchen, Sami’s Kitchen, Krispy Kreme and more.

Support local restaurants! as of next week we will be partnering with some of the top restaurants in the city and placing large orders that will be directly sent out front-line emergency workers across hospitals in GTA . . For those who don't know one of our very first projects was a restaurant, building a Mucho Burrito and Extreme Pita at Bay and Adelaide, which at the time was owned by Extreme Brandz and led by @alexrcraveit (Alex Rechichi) We are very thankful to the Extreme Brandz team who believed in us and continued to give us many more projects thereafter. . . Fast forward 10 years later, we have built more restaurants in this city than any other and have worked with some incredible chefs, top restaurant groups and franchise systems. . . Today the hospitality industry is in a state of crisis and is in need of support from all levels of the government. Let's all support our favourite restaurants in this city and contribute. For more information you can visit savehospitality.ca / onetable.ca #savehospitality #savehospitalityca #onetable . . . . #builditbydesign #Torontorestaurant #Torontorestaurants #Toronto #torontofoodblog #TorontoLife #Torontoeats #yyzeats #torontoliving #blogto #Torontofoodie #torontofoodies #Torontofoodscene #Torontoeats #restaurantphotography #mississaugarestaurant #mississaugarestaurants #torontochef #torontochefs #chefsofinstagram #foodnetwork #chefsoftoronto #insauga #restaurantscanada #torontofoods #torontofoodphoto

The company says more restaurants are expected to come on board in the coming days and weeks.

Build it by Design is also directing people to look to onetable.ca to help support companies in the hospitality industry, as many are facing extreme financial hardship in the wake of a crisis that has forced them to close or drastically alter their business model.

“Today the hospitality industry is in a state of crisis and is in need of support from all levels of the government,” Build it by Design wrote on Instagram.

“Let’s all support our favourite restaurants in this city and contribute.”

The company says the campaign to connect restaurants to hospitals will continue over the coming weeks.