Mississauga Artists Walk Away with MARTYS 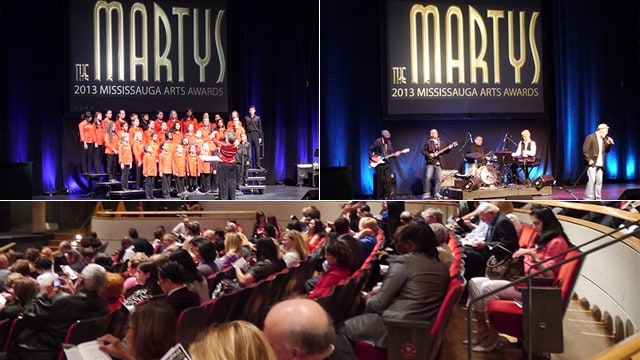 When people think of “glitz and glamour,” they seldom think of Mississauga. But the city does – quite literally – roll out the red carpet from time to time to celebrate art and the artists behind acclaimed books, films, poems, music and performances.

Artists and their supporters converged upon the Living Arts Centre to watch the 19th annual MARTYS. The MARTYS, for those who don’t know, is a lively and formal celebration of Mississauga artists hosted by the Mississauga Arts Council (MAC). The event has all the trappings of a formal award ceremony – a red carpet, professional photographers, hors d’oeuvres, an elegant venue and memorable trophies – but with some informal charm.  But first, a rundown of the polished parts!

Musical group Marielba, Eduardo and Greg entertained guests with Spanish ballads during the red carpet event proceeding the show, and guests filed into the spacious and elegant auditorium at 8:00 pm. The awards kicked off with a brief opening speech by beloved mayor and eternal Sauga icon Hazel McCallion, who showed she’s still spry by dancing onto the stage.

The night’s host was local actor and comedian (and later in the night, MARTY award winner) Tristan Barrocks. Barrocks, confident and funny, shone the most in the video clips of him reading from award winner’s literary works. The other bright spots of the evening were the musical acts. The Alma Quartet played smooth, jazzy background music while people were being seated and crooned for all the winners. The lead vocalist, Luke Matijczyk, had a perfect Justin Trudeau coif and a startlingly polished Michael Buble voice.

Other performers included the Con Brio Singers, a youth choir comprised of talented singers ranging from grades four through 12, the Cawthra Dancers, the Vibronics featuring poet Zohra Zoberi and the Johnny Max Band. The Cawthra Dancers offered the liveliest performance with an energetic dance to You Can’t Stop the Beat from the Hairspray soundtrack. The Vibronics collaboration with Zohra Zoberi was ethereal and exciting, and the Johnny Max Band concluded the night with a high-energy set.

And now for the unpolished bits.

There were a few missteps during the show. A few of the presenters stumbled through their announcements and two skipped naming the nominees (by accident) and tried to jump straight to announcing the winners. An annoyed crowd corrected them. But despite the glaring disorganization (or perhaps nerves, as few are perfect at speaking in public), winners were honored for their contributions to the city’s art scene.

All winners received some sweet monetary remuneration to the tune of $11,000. Well, to be more specific, that’s what the MARTYS gave out in total –  each individual winner didn’t walk away with over 10,000 bones. But, with bright and illustrious careers ahead of so many of the talented people honoured at the show, perhaps the big bucks are en route!