The province of Ontario released a plan called 'The Big Move' about a decade ago, which was a fancy of way of branding the Regional Transportation Plan for the Greater Toronto and Hamilton Area (GTHA). As another decade has now passed, Metrolinx, the provincial transit agency, is looking to revamp and modify the plan.

Metrolinx has embarked on a series of public 'roundtables' around the region, holding them in Peel Region, York, Toronto, Halton and Durham. The first meeting occurred at the Living Arts Centre in Mississauga, the purpose of which was to solicit feedback from residents in each of the roundtables in order for the Metrolinx and their citizen volunteer board to have additional information in revising the regional transit plan.

Antoine Belaieff, Director Regional Planning at Metrolinx, conducted a brief presentation about the draft plan, the entirety of which can be seen here.

Suffice it to say, according to Belaieff, the automobile is still seen as a dominant mode of transportation, as employment numbers were shown to have grown outside Toronto in places like Mississauga and Brampton. The emergence of new mobility technologies has challenged the traditional model of transportation services. Another consideration is that these new technologies move much faster than government, providing huge challenges when it comes to adaptation. Climate change is another matter that factors into future transportation decisions.

Belaieff revealed that the revised goals for the regional transportation plan 2041 will be to create strong connections, provide complete travel experiences and have sustainable communities. The organizers then had people sitting around the actual round tables work with a Metrolinx hired facilitator who was asking about our own transit experiences and what we would like to see be included in the revised regional plan.

Here's what was discussed around my own table, and what we heard from other tables in the final wrap up session.

Do not incentivize more cars by building more parking One of the cyclists said she was appalled at these large looming parking structures that were springing up in Mississauga GO stations like Clarkson and Erindale. Her view was if you want to make Mississauga or other parts of the GTHA not be so reliant on cars, then why do you keep building massive structures that incentive people to drive to the GO station and continuing fueling the dependency on the car?

This reminds me of a strange article I read about a developer in British Columbia planning to build a luxury condo in the suburb of Richmond in 2019. The catch is that this building will not be for just people; it will also be for luxury cars. Hungerford Properties said it is shoring up approvals at Richmond City Hall to construct Trove, a development featuring 45 drive-up, two-storey car storage units and a clubhouse for luxury car collectors, with 80 per cent of the units are already pre-sold at prices starting at $600,000.

Looking at the massive parking structures in our own GO stations, I can't help but think there is some grain of similarity between this excessive monument to the supercar owners community out in the west coast, and the dependency of cities like Mississauga on the automobile. Personally, I recognize it as a reality that the car isn't going anywhere anytime soon. I concede that some level of parking availability has to be at GO stations (it's better if they could bury GO station parking underground, leaving the surface land for other developments).

But those large parking structures look as if they are actually condominiums for cars. If that land was reserved for different purposes, it could have been used for affordable housing. There is talk of installing a similar parking structure at the Cooksville GO station as part of the revitalization of that station because of the LRT. There are already four condos right next door, but would it be a good idea to add a fifth for residents instead of a massive structure for cars?

Should fare integration lead the way to a single transit agency? 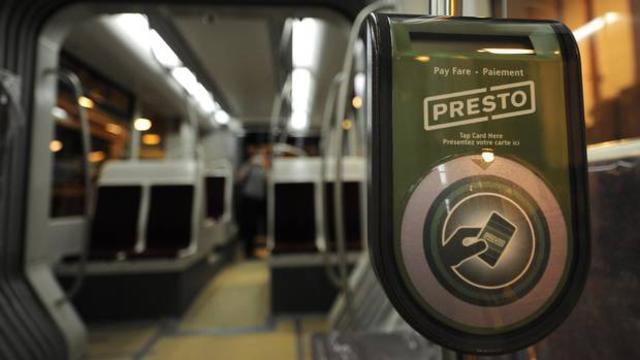 The review seems to focus more on concrete, specific goals such as integrating the payment system under Presto. This was essentially a no brainer; everyone agreed that there should be one standardized fare payment across the region. One example brought up was between Mississauga and Brampton. While they attempted to create a seamless ride between a route between both cities (Route 185), they did not integrate the Presto fare payments, so if you transfer from the Mississauga bus to the Brampton bus, you'd have to pay another fare for it, instead of having it count as one trip.

Is fare integration just the first step into making the administration of transit under overseen by one agency? On the surface it would make sense. If the issue keeps getting put into a narrative as being about one region, what is the need for all these different transit agencies like MiWay, Brampton Transit, Burlington Transit, Hamilton Transit, and so forth? Having all these agencies just gives more reasons to add more government employees. On the flip side, proponents of having separate agencies argue that they provide smaller and more familiar economies of scale that would counteract a massive bureaucratic regime overseeing transit in the GTHA. For full disclosure, the gentleman who expressed this viewpoint, from one of the other roundtables, is a municipal employee from the City of Mississauga.

So there is a clear consensus on fare integration, but the matter of whether to have one single transit agency that can be held accountable, or maintain the existing different agencies to allow economies of scale to, actually, allow some local level of accountability…that's a question the review will need more time to mull over.

Politicians need to have the courage to do what is unpopular

Metrolinx is a provincial transit agency, so they do their job no matter who holds the political reins of power at Queen's Park. Still, that didn't stop people from bringing up examples of transportation planning that had clear political motivations behind them, such as the proposed Kirby GO station up in Vaughan and the dreaded one-stop Scarborough subway.

Several people from the roundtables mentioned the need for political leaders to have the courage to advocate for policies that are not popular. This ties back into the issue of building more parking structures for GO stations which only goes on to incentivize further automobile use. Very few politicians these days are willing to do anything that would rile drivers by any stretch of the imagination (case in point, Premier Kathleen Wynne backing down on road tolls on the Gardiner and DVP). Other roundtable participants asked where are the brave politicians proposing that we need to do things that are politically unpopular and may cost them votes, but they know is the right thing to do?

There are more community roundtables scheduled throughout the GTHA through October into November, so if you're interested in venturing beyond Mississauga and Brampton to attend one, that would be encouraged as you would expose yourself to a wider array of viewpoints about the regional transit plan from other parts of the GTHA.

We will keep you updated when Metrolinx publishes the feedback they received from their roundtable consultations.