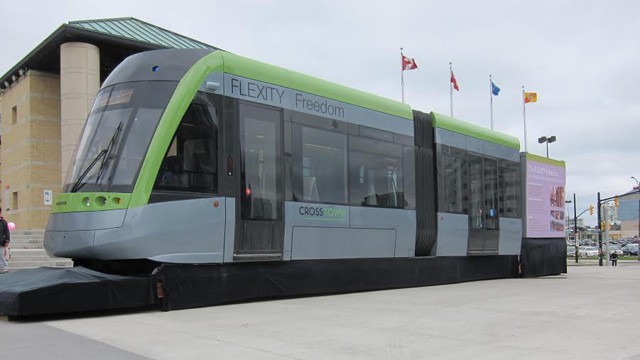 Insauga had previously reported that Bombardier appeared to be an obvious choice to be the sole manufacturer for all the Light Rail Vehicles (LRV) for the Hurontario LRT as well as other light rail / public transit projects in the Greater Toronto Area. However, Bombardier had trouble keeping with their deadlines to produce the LRVs, which were supposed to be built in Thunder Bay, and a Metrolinx spokesperson at the time told the media that concerns over those issues prompted the company to explore its options.

It appears that Metrolinx has found another option.

Metrolinx has struck a deal with another manufacturer to provide dozens of vehicles for key Toronto-area transit projects. The agreement would see Alstom, which is currently building LRVs for Ottawa, produce vehicles for southern Ontario as well. At least part of the work will be done at a plant in the Toronto area.

This looks like a significant sign of how much confidence the transit agency has lost in problem-plagued Bombardier. Besides the manufacturing delays and “quality” issues, Bombardier has had issues over their leadership, with the grandson of the company’s founder having to step away as executive chairman amidst an outcry from Bombardier’s own stakeholders, but not before proposing to hike the leadership team’s salary by 50 per cent.

In a seemingly hastily called press conference Friday morning, Ontario Transportation Minister Steven Del Duca announced the arrangement with Alstom for 61 vehicles in transit projects such as the Hurontario LRT. Del Duca said that because Alstom was producing for Ottawa in a timely manner it was the right idea to go with them. This also fulfils the commitment to have 25 per cent of Canadian content. Even so, Del Duca stressed that Bombardier still had at least $1 billion worth of existing contracts, such as with GO Transit.

The most vivid example of Bombardier’s influence amongst their political acquaitances was when former prime minister Brian Mulroney’s government decided to award a maintenance contract for Canada’s CF-18 fighter jets to Bombardier rather than go for a cheaper bid from Bristol Aerospace, based out of Winnipeg. Of course there were political considerations in that decision; Mulroney’s PCs won a slew of Quebec seats in the 1984 federal election, and Western Canada was at the time already solidly in the PC column. But for those of you who are caught up in your Canadian political history, you probably know what happened after that.

As a consumer, in layman’s terms if there were alternative choices to buy, say, bananas besides going to the same place over and over, wouldn’t you take it especially if that same place was overcharging you? Or wasn’t giving quality bananas at some point? If Bombardier is falling behind on their contract to produce these light rail vehicles, and an alternative like Alstom is available, why not take it?

It’s better for the government not to put all their eggs in one basket, and at least nip a potentially costly problem before it’s too late.