Meat, dairy and drama-free: Planted and Democracy a plant-based match made in Hamilton 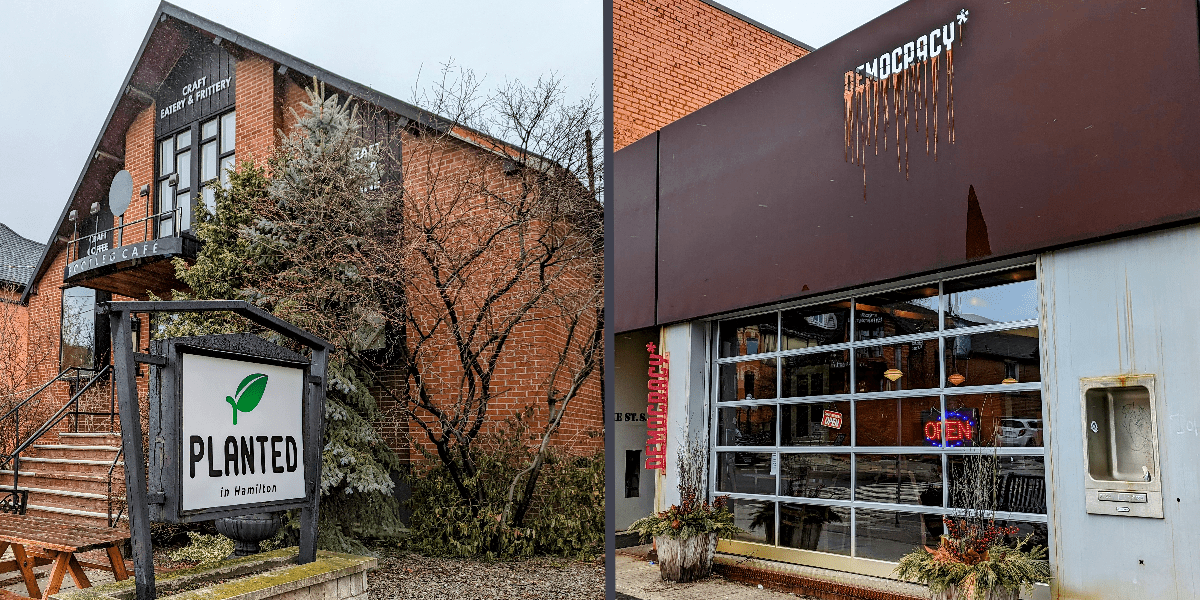 Planted opened its doors across from Democracy on Hamilton's most bustling block. Is Locke Street big enough for these two plant-based titans?

It’s a Saturday afternoon in Hamilton and you decide to take a hungry stroll up Locke Street South.

You could be a vegan or vegetarian hankering for a hearty falafel wrap or Big Mac pizza. You could also be lactose intolerant and miss being able to enjoy mac and cheese and a chocolate brownie sundae without having to make a pit stop on your way home.

Or maybe, you just appreciate good food and exceptional coffee and tea.

About halfway up Locke, you’re faced with two options. To your left is Planted — home to some of the fluffiest pancakes and churro fries dusted in cinnamon with a side of caramel dip. To the right is Democracy — unofficially holding the title for largest cauliflower wings on the planet and the creators of one of the best Nanaimo bars you’ve ever tasted.

Having two of the city’s top plant-based eateries situated across from one another is an obvious win for consumers. But believe it or not, it’s also a win for business.

Sure, they’re technically opponents. But if you’re here for the drama, you’ll be leaving disappointed.

“Our donuts are really basking in the natural light of our new location. And guess what? We’re opening today!” wrote Planted, which moved from its original location on John St.

“We’ll just be casually standing by the door waiting,” replied Democracy, which included a smiley face emoji with heart eyes.

Democracy wasn’t just going for optics either. General manager Amy Lafleur says Planted moving in across the street is great for her mostly vegan staff, as well.

“I had heard through the grapevine about the issues (Planted was) having at their previous location and was nothing but happy for them (and the Hamilton vegan community) to learn they’d found a new home,” Lafleur told inTheHammer. “Many of the staff at Democracy are vegan or mostly vegan, so it will be great for us to have somewhere else nearby to get our lunch or dinner while at work.”

“In fact, I went there Friday evening right when they re-opened, and we had the most amazing queso dip platter. I also brought back some of those yummy-looking donuts they had posted to their Insta for the staff.”

“I look forward to having them as neighbours and hope the vegan restaurant community in Hamilton continues to grow and thrive,” added Lafleur.

While both restaurants offer breakfast items and baked goods, they differ quite a bit.

Planted has a modern brunch feel and takes full advantage of its unique chalet-esque space inside a former church. They also have some outdoor seating facing Locke St.

Democracy is an industrial-style cafe that features a lot of dinner items. It also has a retractable garage-style door that can be opened, making diners feel like they’re practically on the sidewalk — a people-watcher’s dream.

Planted chef and co-owner Emily Perry says she’s a fan of Democracy and there’s plenty of business to go around.

“I love what Democracy does and I don’t see any reason we can’t both thrive on Locke Street,” she told inTheHammer.

There is another major difference for those with dietary restrictions. While Democracy has some gluten-free options, Planted is entirely celiac-friendly.

“We are all gluten-free while (Democracy has) some phenomenal looking gluten-full pretzels and cinnamon buns, so I think depending on your dietary preferences you might pick one or the other,” said Emily.

With the food quality being the same and both restaurants having near-perfect reviews on Google, it may just depend on your current mood.

Either way, it’s a win-win-win.