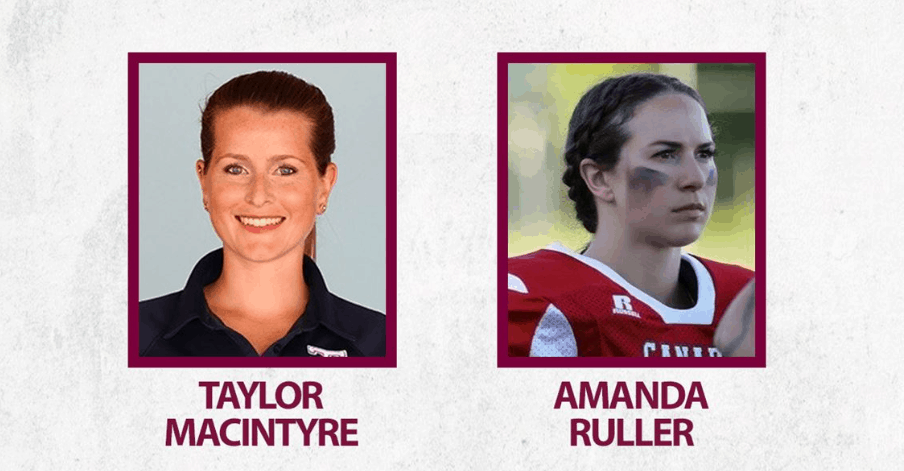 The McMaster Marauders have filled out its coaching staff for the 2021 football season with the additions of assistant coaches Taylor MacIntyre and Amanda Ruller.

The pair bring extensive football resumes with them to Hamilton as they join the day-to-day operations of the Marauders football program while getting involved in offensive game planning and skill development.

“What stood out about Taylor and Amanda was their passion for football, for coaching and for teaching,” said Head Coach Stefan Ptaszek, now entering his 13th season at McMaster.

MacIntyre was a wide receiver and backup quarterback in high school, helping to pave the way for several other young women at Parkside Collegiate Institute. Since becoming the first female to play on the school’s men’s football team, at least five additional female student-athletes have followed in her footsteps.

“McMaster Football recognized a gender gap in coaching football in the OUA and saw an opportunity to grow their program in a different way,” said MacIntyre. “I’m looking forward to learning from some of the best coaches in Canada and joining an organization that clearly values diversity.”

I have been selected to work with @Marauderftbl as an assistant football coach for the 2021 season!

Following her playing career, MacIntyre made the transition to coaching when she became Parkside’s wide receivers coach. MacIntyre has held positions with the Hamilton Tiger-Cats, the University of Toronto Varsity Blues, and the Special Olympics.

“We’re thrilled to welcome Taylor and Amanda to the Marauder Football family,” said Shawn Burt, Director of Athletics & Recreation. “The hiring of these two great leaders in the game of football not only garnered international attention and interest but also reinforces McMaster’s commitment to being leaders when it comes to equity and inclusion in sport. We fully expect this to become a model for football programs across Canada as interest and feedback from our peers has been extremely encouraging.”

“By opening more doors and enabling greater opportunity for women in sport, we are confident today’s news will truly be a game-changer in the Canadian sports landscape” he added.

Ruller comes to McMaster from Regina, Saskatchewan. with a background in strength and conditioning. She has built a career as a Sports Performance Coach training CFL and U SPORTS players, having worked with the University of Regina football program.

Ruller is also a competitive Olympic weightlifter who holds provincial snatch, and clean and jerk records.

“My focus on power and speed in the weight room will make sure these athletes find success within their playing season and help keep them healthy,” said Ruller. “My background in competing in Olympic lifting is a great bonus for teaching those skills in the weight room as well. I hope to pass on my knowledge and have our athletes work hard towards a winning season.”

Mac Football announced in June that it was starting an apprenticeship coaching program — earmarked for women, gender non-binary, or two-spirit individuals who have completed at least one year of university or college education and “demonstrate the desire for coaching football.”

“We hope this program is a catalyst for coaching ranks to be heavily populated with women going forward,” said Head Coach, Stefan Ptaszek. “I’m extremely excited that this apprenticeship program will help smart, talented, and intelligent coaches provide an opportunity to be role models for our student-athletes, and I can’t wait to be part of the execution.”

“The apprenticeship is an opportunity to create a pipeline for women to get into coaching football, and football specifically,” said Grant, a Stoney Creek native and former Hamilton Tiger-Cats receiver. “We have the platform and ability to change the prevalence of football just being a men’s sport. Football is not only for men, and we don’t just want women, we need women in our coaching ranks.”

“Coach Grant brought this incredible idea to me that was without a doubt worth supporting and developing,” said Arsenault. “As we have seen in the NFL and other various professional sport organizations recently, the inclusion of women only strengthens and grows a team.”

Grant and Arsenault worked closely with the Ontario Women’s Football Association, as well as the Equity and Inclusion office at McMaster.

“To offer this apprenticeship program and open the door for two women to gain an outstanding coaching experience with one of Canada’s top-rated university football programs is a great step towards breaking down gender norms, not just in sports, but in society as well.”

The Marauders will make their long-awaited return to action on Sept. 18 against the Western Mustangs in a rematch of the 2019 Yates Cup.

Mac will host the University of Waterloo on Oct. 2 at Ron Joyce Stadium in Hamilton for their home opener.