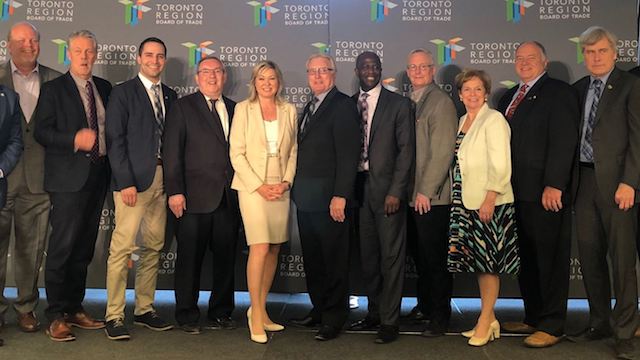 Recently, the Southern Ontario Airport Network (SOAN) hosted its 2019 SOAN Summit at the Toronto Region Board of Trade. Municipality mayors, councillors, leaders from Southern Ontario airports, employees from Canadian airlines, and businesses were all in attendance.

Mayor Crombie introduced a new council, Southern Ontario Municipal Aerospace Council, and a delegation that will go to the 2019 International Paris Air Show.

Each member of the council will collaborate to reach the airport’s full potential and gain economic growth. As the second largest aerospace cluster in Canada, they will help each other gain investments and solve any challenges.

“It’s an effort to strengthen our supply chains so that we can more meaningfully compete on the world stage,” said Crombie.

The council plans to meet twice a year to discuss how to help each other grow and realize opportunities as the industry expands. Mayor Bonnie Crombie will stand as the unifying voice and chair of the new council. She aims to work together to raise awareness and provide advocacy on behalf of the aerospace sector.

“We will showcase the stories of aerospace companies in our cities who are working together on innovative research that is strengthening our local supply chains. We will continue to foster innovation and support the next generation of leaders in the aerospace sector at the seven post-secondary institutions across our region and we will encourage them to work more closely, with each other and with industry,” said Crombie.

She states that the council will bring growth, increase transit, and create prosperity in the city. The council will also influence global companies to invest in Mississauga, which will, in turn, create more jobs and businesses.

“Our group will build on each other’s strengths whether that’s passenger travel, cargo, pilot training or small air crafts for the benefit of our shared economies. This is much bigger than bringing prosperity to our member airports. It’s about pooling talent and resources to create integrated supply chains across our region that will allow us to create good local jobs and attract aviation giants from around the world,” said Crombie.

As stated earlier, the first major step the council is taking will be attending the 2019 International Paris Air Show. The Paris Air Show is the largest air show, which attracts many major players in the aerospace sector. By attending the air show, Mayor Crombie, municipal leaders, representatives of economic development offices and airports leaders will be able to speak to businesses to influence them to invest in Southern Ontario.

“Howard and I will be at the largest aerospace exhibition in the world, the Paris Airshow, next month to promote Southern Ontario as the place for global aerospace companies looking to invest. The opportunities for this new council to work closely with SOAN, industry, business and government to strengthen our supply chain across the region and unlock global investment opportunities are limitless,” said Crombie in her speech. “Only by breaking down silos and working together will we ensure that the aerospace sector in Southern Ontario not only thrives but drives our province’s economy for generations to come.”

The delegation will showcase Southern Ontario’s airport and aviation assets to an audience of 300 delegations from 100 countries.

“As we look to the future of this growing region, we know that each of our airports will have an important role to play. Collaboration allows each airport to focus on the roles it can play and develop their own businesses to leverage their individual strengths and regional demands,” said Eng in his speech at the summit.

According to SOAN, it is estimated that by the 2040s, more than 110 million passengers will want to travel in, out, within, and through Southern Ontario, so airports need to adjust to this growth. There has also been more investment and development activity on airport lands, which has brought jobs and economic development opportunities to municipalities.

SOAN airport operations have contributed roughly $2.3 billion in tax revenue for municipalities, the provincial and the federal government.

By working together, they want to market each airport’s distinct niche and support municipalities.

What do you think of these initiatives?