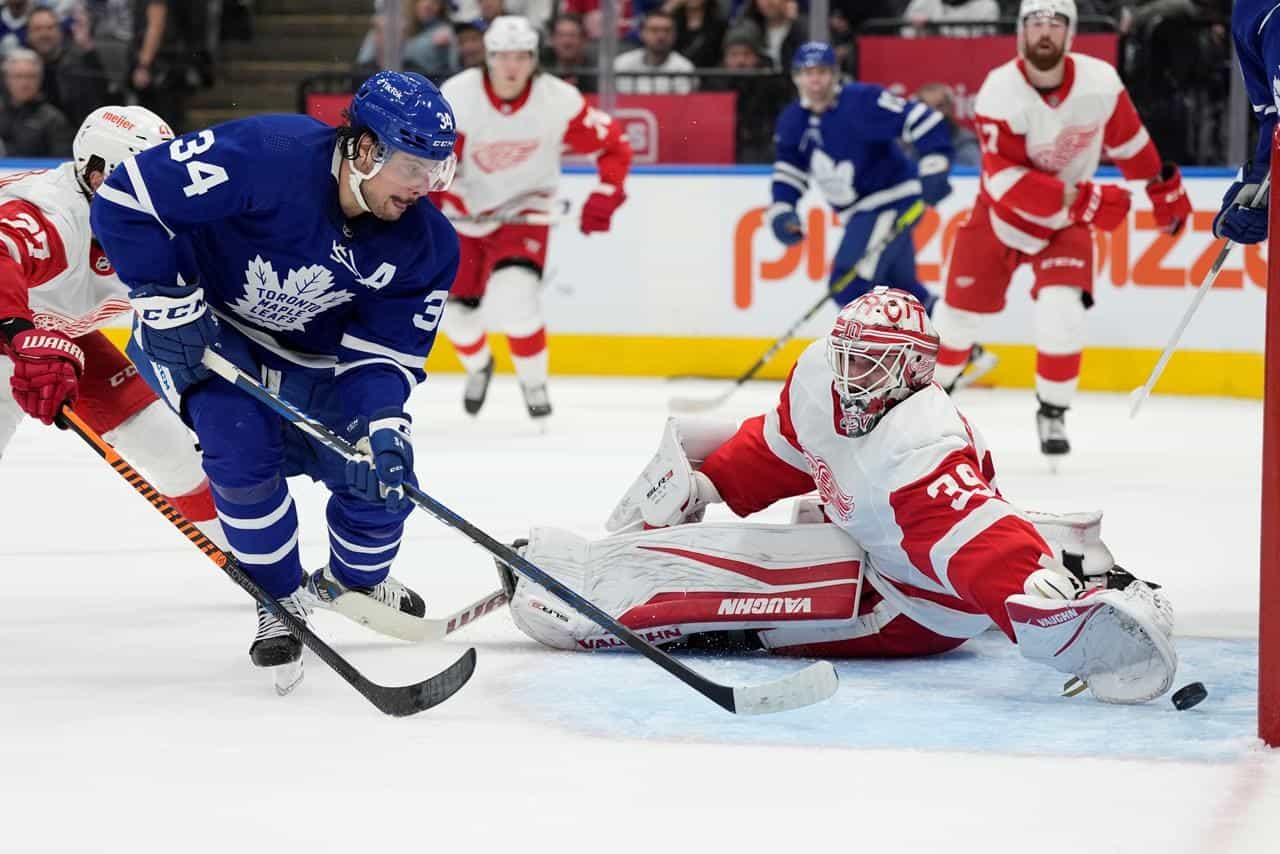 Auston Matthews scored his NHL-leading 59th and 60th goals of the season as the Toronto Maple Leafs defeated the Detroit Red Wings 3-0 on Tuesday to clinch home-ice advantage in the first round of the playoffs.

The 24-year-old, who snapped a five-game goal drought, is the first player to score 60 times in a campaign since Steven Stamkos in 2011-12.

Oakville native John Tavares had the other goal and Jack Campbell made 20 saves to register his fifth shutout of 2021-22 — and first since Jan. 1 — for Toronto (53-21-7), which set a franchise record with its 30th home victory of the season. William Nylander added two assists.

The Leafs are now locked into the No. 2 seed in the Atlantic Division and will open the playoffs next week at Scotiabank Arena against either the Boston Bruins or Tampa Bay Lightning.

Matthews, who suited up for his third straight game after missing three in a row with an undisclosed injury, had a number of great looks through the game’s first 35 minutes before finally solving Nedeljkovic with 4:12 left in the second period.

With the Leafs in the middle of a line change, Jason Spezza fed Matthews in front before he outwaited the Detroit goaltender and slid home No. 59 before chants of “M-V-P!” rang around Scotiabank Arena.

And after Tavares doubled the Leafs’ lead at 4:03 of the third with his 27th, Matthews made history by burying No. 60 on a power play at 5:49 when he kept the puck in at the offensive blue line before ripping a shot past Nedeljkovic’s glove to send the crowd into another frenzy.

Matthews’ teammates gave him an ovation on the bench, while some fans threw hats on the ice in honour of the accomplishment.

Toronto defenceman Jake Muzzin, who played for just the 46th time in 2021-22, returned to the lineup after sitting out the last six games with an undisclosed injury.

Alexander Kerfoot got the call on the left side of the Leafs’ top line with Matthews and Mitch Marner as Michael Bunting (lower-body injury) missed his second consecutive contest. The 26-year-old rookie winger, who was hurt Saturday in Florida, will also miss Friday’s regular-season finale against Boston.

Toronto won the first three meetings of the season by a combined 22-15 scoreline, including a wild 10-7 victory in the teams’ last meeting Feb. 26 in Detroit.

The Leafs had the majority of the chances in the first, including six shot attempts from Matthews, but couldn’t find a way past Nedeljkovic.

Matthews had another great opportunity four minutes into the second before Campbell denied Joe Veleno from the slot on a Detroit power play.

The Toronto netminder, who worked through some midseason struggles following an all-star worthy start to the schedule, then made another good stop on Wings rookie Lucas Raymond to set the stage for Matthews.

Marner sits three points shy of becoming the fourth player in franchise history — and second this season after Matthews — to register 100 points. … Tavares was rested for Sunday’s 4-3 shootout victory in Washington. … Detroit wraps up its schedule Friday in New Jersey.